Twenty-five years ago sisters Abby Pete and Leslie Pontz hired an agent to find a publisher for a proposal they had for a children's book of theirs that would be called “Harvey the Hippo.” 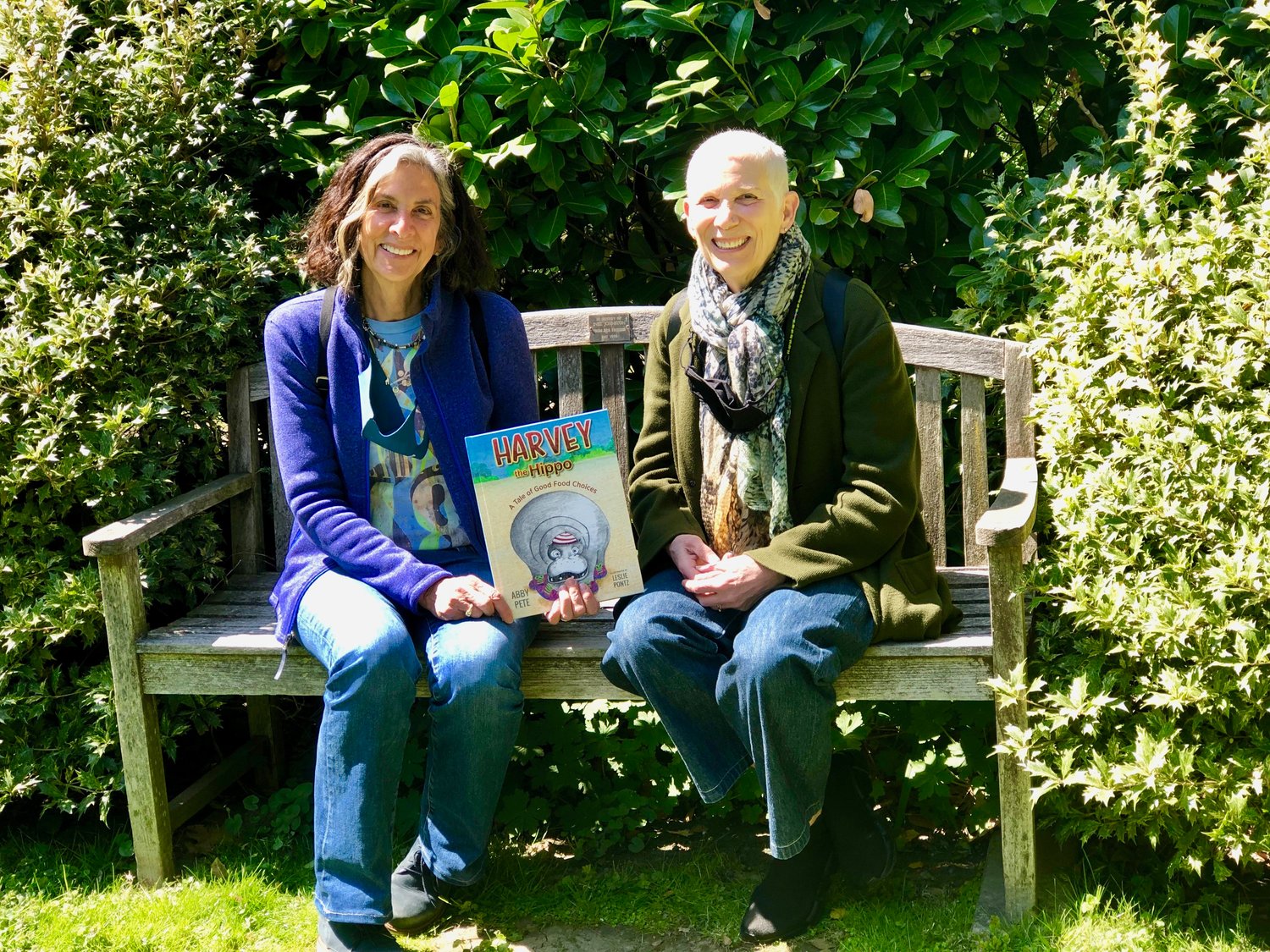 Sisters Abby Pete, of Chestnut Hill (left), and Leslie Pontz, of Mt. Airy, proudly hold up their book, “Harvey the Hippo: A Tale of Good Food Choices,” which was released last month by a traditional publishing company. (Photo by Beth Milley)
Posted Thursday, May 13, 2021 10:00 am
by Len Lear

Twenty-five years ago sisters Abby Pete and Leslie Pontz, of Chestnut Hill and Mt. Airy, respectively, hired an agent to find a publisher for a proposal they had for a children's book of theirs that would be called “Harvey the Hippo.” They were rejected by dozens of publishers and eventually gave up the effort. According to Leslie, “I kept asking Abby over the years to try again, but she wasn't ready.”

(It is not unusual for a first-time author to be rejected dozens of times, which does not necessarily mean that the book is not well worth reading. For example, “Fear of Flying,” by Erica Jong, which was rejected by over 50 publishers, according to public statements by Jong, over two years of trying before finally being accepted by Henry Holt & Company in 1973. The book eventually become number one on the New York Times best-seller list, sold more than 27 million copies worldwide and became one of the top best-selling novels in publishing history.)

Last year, because they had a lot more time at home due to the pandemic, Pete and Pontz resuscitated their effort to improve “Harvey” and find a publisher. (Pete wrote the poetic text, and Pontz did the illustrations), and as fate would have it, they hit a home run with a traditional publishing company, Loving Healing Press of Ann Arbor, Michigan, right out of the box with no help from an agent.

A friend of theirs, Daralyse Lyons, of Mt. Airy, author of numerous published books (she has been featured in the Local over the years), urged them to contact the Michigan publisher. “I sent the script,” said Abby, “and in two days they said yes. It came out in early April. We did improve it with rewriting, and we are thrilled. My daughter put it on Facebook, and there are three reviews so far, all very positive.”

“A friend of mine put it on Facebook,” added Leslie, “and it has been re-posted a lot. All of our kids subscribe to online publications, and it is really getting around. The publisher gets it into everything digital — eBooks, Barnes & Noble, etc. It's out in hardback, softback and digital versions and will soon be out in audio.”

According to Toni Seidl, a child psychotherapist at Children's Hospital of Philadelphia, “'Harvey the Hippo' brings new delight to the body of read-aloud literature for young children … Thank you, Harvey, for nourishing the inner life of the young child!” My own opinion is that both the text and the illustrations are charming, delightful and very funny!

When asked their ages, Abby said, “I don't think it's necessary to mention age unless you want to say that you're never too old to do something new. I will say, though, that Leslie is older (than I), MUCH older (actually four years).”

The sisters grew up in West Oak Lane but as teenagers moved to Spring House, where their father, architect Ezekiel Levinson (1912-1978), designed a house. The book is dedicated to him because the genesis of the book came from him. According to Leslie, “When I was just a baby, my father would say, 'Harvey the hippo is up in the sky,' so I would look up, and my dad would put food into my mouth.'”

Abby, who is 2007 purchased (with husband, Ron) the Chestnut Hill Hotel and Farmers Market, later renamed Market at the Fareway, went to Wissahickon High School and Temple University as an English major. Abby taught English in central PA for one-and-a-half years and then started a family catering business, which lasted for 12 years before having children.

After moving back to Philly, Abby decided to pursue another of her interests, animals (she has been a vegetarian for 36 years), and in 2008 became a docent at the Philadelphia Zoo, where she can happily talk about hippos as well as the other animals. (She said she has never actually seen a hippopotamus fly.) She has three children and four grandchildren, two of whom eat well and two do not.

Leslie, who (with husband, Curtis) has five children and eight grandchildren, went to Wissahickon High School and Syracuse University, where she earned an undergraduate degree and masters degree in art. A fiber sculptor, Leslie has shown internationally in invitational and juried exhibits in France, Brazil, Ireland and Venezuela as well as throughout the U.S. She has won several awards for her work, which is featured in many private and public collections including the Philadelphia Museum of Art collections. She started a business making table linens and upholstery fabrics for 12 years that were sold to high-end stores through designer showrooms.

For more information about “Harvey,” visit harveythehippo.com. Len Lear can be reached at lenlear@chestnuthilllocal.com