“Bridesmaids” isn't a traditional romantic comedy, nor is it really a wedding flick.  What it is is an exploration of female friendship. 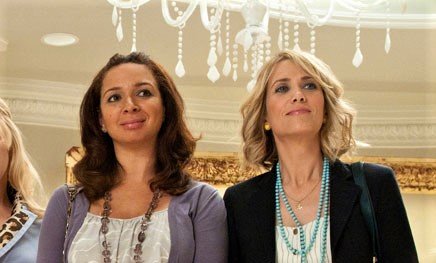 If you haven't yet flipped your wig for Kristen Wiig, get set to.

Because the Saturday Night Live force of nature fulfilled the promise of her gaggle of supporting movie turns -- with her first starring role.

Wiig also co-wrote and co-produced “Bridesmaids" (2011), which, although it's obviously a showcase for her, is also an ensemble comedy that gives just about everyone in the principal cast a chance to shine.

Wiig is Annie, a thirtysomething Milwaukee baker whose cake shop failed during the current recession, now working unhappily at a jewelry store.  Then her best friend, Lillian, played by Maya Rudolph, gets engaged.  So, because when it rains, it pours, Lillian has, in a sense, replaced Annie with her fiancé.

But Annie will, of course, serve as the maid of honor.  That is, until a wealthy, upper-crust new friend, Helen, played by Rose Byrne, takes aggressive charge of the wedding preparations in a way that makes it look as if she intends to usurp Annie's MOH status and, in the process, replace her in the eyes of the world as Lillian's official best friend.

Ah, friendship – so pure, so innocent, so natural.

The rest of the cast – including Elie Kemper, Melissa McCarthy, and Wendi McLendon-Covey as the other bridesmaids, along with Chris O'Dowd and Jon Hamm as the men in Annie's life, and the late Jill Clayburgh (in her last role) as Annie's mom  –  serve as witness to the dishonorable maid-of-honor competition as it heats up.

Wiig wrote the original script with Annie Mumolo.  Their sweetly vulgar concoction is populated with quirky characters, as opposed to caricatures.  The screenwriters, intent on capturing the female experience and the female sensibility, are not afraid to get gross or downright scatological, as if to show that male-centric movies don't have a monopoly on outrageousness.  Of course, this kind of envelope-pushing only works when the material in question is funny.  Fortunately for us, in this case, it is at times gut-bustingly hilarious (two-word clue: food poisoning).

Although femme-driven, “Bridesmaids” isn't a traditional romantic comedy, nor is it really a wedding flick.  What it is is an exploration of female friendship, a refreshingly candid comedy-drama that tries to capture the way women treat and speak to, and react to and behave because of, one another.

Director Paul Feig has made all the right calls: he's allowed just the right amount of improv, gotten strong contributions from his ensemble, known when to be restrained and when to be daring, and gotten all kinds of laughs without ever losing sight of his core theme.

As for Wiig, we've long since known that Wiig was naturally funny, as good at physical comedy as she is at verbal and vocal comedy.  But she's also quite effective, it just so happens, in the film's dramatic scenes.  She keeps it real and her character three-dimensional regardless of the mood or intent of the scene in this highly entertaining comedy that's both raunchy and sentimental.

Forget that "Always a Bridesmaid..." stuff.  If the movie marketplace is a wedding, “Bridesmaids” is most definitely a bride.