A  low-key, fact-based espionage mystery-thriller with a secret identity as a marital drama.  In both guises, it delivers as a taut, tense, timely tale. 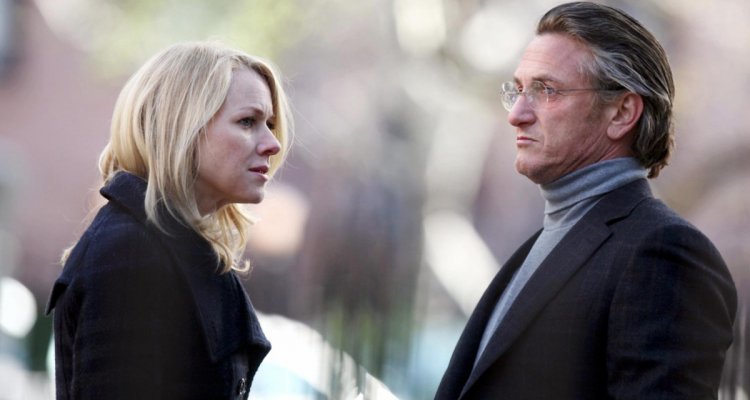 “Fair Game” (2010) is a low-key, fact-based espionage mystery-thriller with a secret identity as a marital drama.  In both guises, it delivers as a taut, tense, timely tale about a scandal that came to be called Plamegate, which was neither fair nor a game.

Naomi Watts portrays Valerie Plame, a veteran energy analyst who is also and more importantly a veteran covert CIA agent who returns from a post-9/11 trip taken in search of weapons of mass destruction to report that there is no indication of Saddam Hussein's supposedly active nuclear program.

Sean Penn plays her husband, retired ambassador Joe Wilson, a career diplomat and consultant who then returns from a fact-finding mission in Niger.  One of the facts he finds is that Niger did not, as was reported, sell yellowcake uranium to Iraq.

But what Wilson and Plame hear during a speech to the nation by President Bush is that the administration, for whatever reason, has misrepresented that finding.

So an angry Wilson goes public and authors a New York Times op-ed piece alleging that the administration purposely altered the intelligence.

Then, not by coincidence, Vice President Dick Cheney's Chief of Staff, Scooter Libby (David Andrews) – either out of ignorance or a fervent belief in what the film's title implies or perhaps as spiteful payback – throws Plame under the bus by leaking her secret identity.

To say that this has a significant effect on Plame and Wilson and their life together -- as spouses, as parents, as employees, as breadwinners, as Washingtonians -- is to understate the case severely.

Where the ultimate truth lies, as the United States launches Operation Iraqi Freedom by invading Iraq in 2003, we of disparate political persuasions can still argue about and probably will for quite some time. But that doesn't change the fact that ”Fair Game” registers as a history lesson -- not necessarily an objective one, but a history lesson nonetheless.

Director Doug Liman works from a solid script by brothers Jez and John-Henry Butterworth –  based on Fair Game by Plame and The Politics of Truth by Wilson – that condenses the facts for dramatic purposes.  It's humorless but not stifling at all, surprisingly suspenseful and tragic, and boasts immediacy from frame one on as well as a sense of outrage that builds as the film proceeds.

In their third on-screen pairing, Watts and Penn collaborate on a nuanced exploration of marital struggle and strife – a union strained even before the leak and positively under siege thereafter.

Watts is excellent, smartly understated as she lets us see the disappointment and confusion as her life falls apart, but she also shows us the strength and expertise that allowed her to lead this kind of double life in the first place.  And the redoubtable Penn delivers yet another vivid, highly skilled turn as the idealistic, outspoken, and impulsive Wilson, even if he gets a trifle out-of-character-preachy in the late going.

The title – taken from a reference to Plame by Deputy Chief of Staff Karl Rove – also stands as a reminder to us of where the truth ultimately lies in movies, in politics, in life.

“Fair Game” is a riveting, streamlined, and ultimately moving abuse-of-power docudrama that is also a marital portrait that could have just as aptly been titled Mr. and Mrs. Wilson.