A Look Back at “Paul”

A Look Back at “Paul” 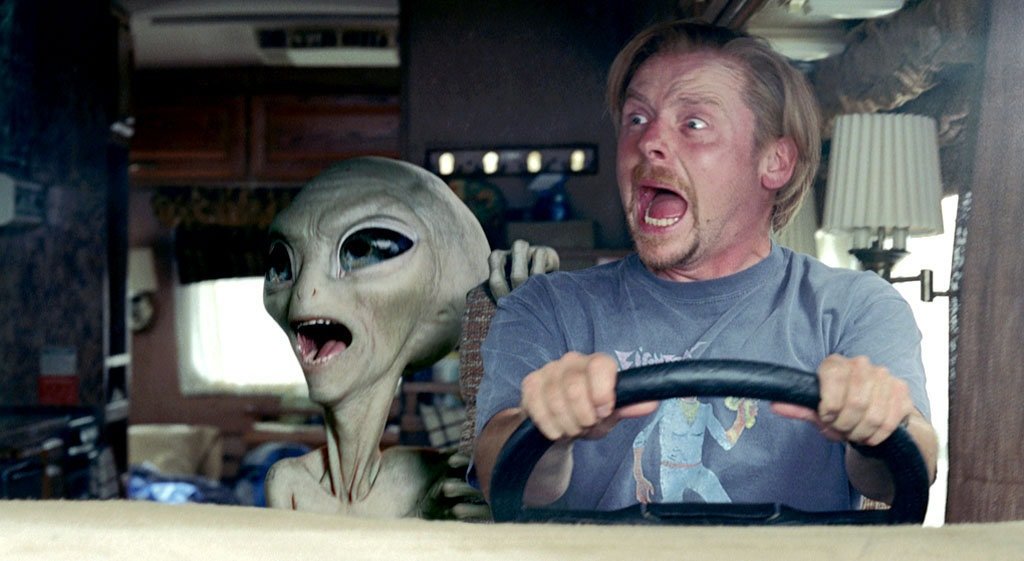 Simon Pegg co-wrote and co-starred in 2004's “Shaun of the Dead” and 2007's “Hot Fuzz,” the first a laugh-out-loud hilarious spoof of the zombie genre, the second a sputtering sendup of buddy-cop action thrillers.

Graeme (Pegg) and Clive (Frost) are best buds, British fanboys attending the Comic-Con convention in San Diego as a way of kicking off a road trip during which they hope to complete a tour in their ramshackle RV of alien landmarks and alleged UFO landing sites throughout the western and southern United States, hoping to end up in Roswell, New Mexico.  Natch.

But a car accident brings them into the company of a wisecracking, green-skinned, doe-eyed, big-headed, three-nippled extra-terrestrial who has escaped from imprisonment at Nevada's Area 51 and who calls himself Paul.  He's voiced unmistakably by Seth Rogen.

Like E.T., Paul would like to get to a spaceship that will allow him to return home, but government agent Jason Bateman is one among several black-suited FBI agents hot on his trail, all taking orders from an unseen female boss known as "The Man."

Understandably startled and disbelieving at first, Graeme and Clive eventually become sympathetic and come to Paul's aid.  They also pick up a hitchhiker in a trailer park, one Ruth Buggs, a farmer's daughter and zealous creationist played by Kristen Wiig whose evangelical father, justifiably worried that she has been abducted by aliens, is trying to track her down.  Ruth will soon have her eyes opened by one of Paul's comprehensive mind melds.

Director Greg Mottola doesn't overdo the CGI work, using just enough in the way of visual effects to create and maintain the illusion without sacrificing his comic edge with showoff-y pyrotechnics.  He's not quite able to deliver a boffo climactic payoff, but we sure do enjoy the ride to that point anyway.

And the dense and witty script by Pegg and Frost, sweet-natured as opposed to mean-spirited, keeps the pop-culture references and in-jokes coming, while mixing its casual everybody-thinks-they're-gay bromance with push-the-envelope gags in the snarky “Superbad vein.”  And while dishing up a collection of likable characters, the screenwriters even manage to sneak in a message of openness to, and tolerance of, others' belief systems.

Pegg and Frost may be a bit too old for their roles, but they have an easy chemistry; Rogen has plenty of fun with his free-form alien riff; Wiig and Bateman deliver as per usual; and there are a few surprise cameos.

So this is an easy-viewing, R-rated entertainment that delivers the laughs and refrains from overreaching, reminiscent of the fondly recalled “Star Trek” sendup, “Galaxy Quest.”

Think of this playful fantasy, this road-flick celebration of sci-fi geekdom, as an enjoyably close encounter of the nerd kind.