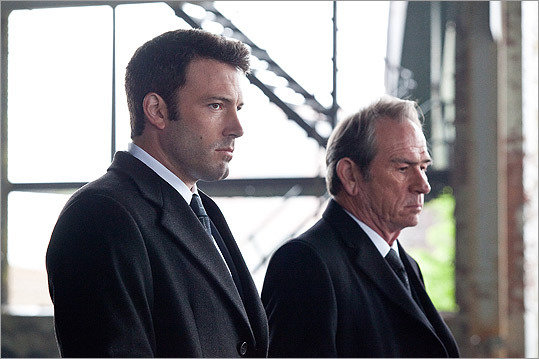 Ah, downsizing during the Great Recession.

When the cold and calculated corporate pink slip creates a parade of those moments when the American dream turns into an absolute nightmare and puffed-up self-images take a scarily precipitous dip down that corporate ladder, sometimes just collapsing.

It examines the lives of three upper-middle-class men trying to survive and navigate the monumental changes in their lives when the corporation they work for, which needs to lay off hundreds of workers to please the shareholders, suddenly pulls the rug out from under them and their families.

And because they've built family lives around their positions and the generous income it has provided for them, they've lost not just their jobs but their identities as well.

Ben Affleck plays a successful thirtysomething head of sales and marketing for GTX, a Boston shipbuilding conglomerate, who is suddenly laid off.  He turns to his construction contractor brother-in-law, played by Kevin Costner, for carpentry work, but he is just not well suited to it.  And his wife, Rosemarie DeWitt, starts cutting expensive suburban corners from their lives that her husband is too proud of or habituated to do himself.

Chris Cooper's 60-ish colleague, who has worked here for 30 years, also gets the sack and, because of his age, is a lot less employable.  All of a sudden, with the prospect of job-hunting looming, it matters that his hair is gray.

And Tommy Lee Jones is Gene, who co-founded the company with his best friend, Craig T. Nelson, He doesn't seem to be in any danger of dismissal, but then he articulates his strong disapproval of what the bottom-line-obsessed CEO, whose stock options remain safe and secure as a merger becomes more and more imminent, is doing to those soon-to-be-jobless employees with a record boasting both loyalty and longevity.  Suddenly the friendship between the co-founders doesn't seem so close.

The overall picture painted isn't as bleak as you might expect because, admittedly, these aren't exactly the most desperate people on the planet.  These are upper-income tragedies, to be sure, about folks who have done well but have spent too much because they never really considered the improbable eventuality that now unhappily confronts them.

And maybe the fact that even their creature-comfort-able lives -- as well as those of their children and, in some cases, their parents -- can be turned upside down in a flash is the point.  After all, we already knew this about blue-collar workers.  Hey, if it can happen to these guys, implies the movie, then it can certainly happen to us.

Debuting writer-director John Wells gets uniformly fine work from his ensemble in what could be seen as an interesting if much less escapist companion piece to “Up in the Air.”  Think of it as Down on the Ground.

For all its legitimately earned poignance, the film fails to follow through on all its germane subplots, and features an ending that may be a shade too optimistic given what precedes it.  But we'll forgive all that in the name of how wide an audience the film speaks to.

“The Company Men” is an engrossing and relevant cautionary tale about economic cave-in that provides good, truth-telling company.