The boundaries of "doing whatever it takes to get by" change during times of financial hardship, a phenomenon that “Win Win” explores as it dramatizes the decision-making process in everyday life. 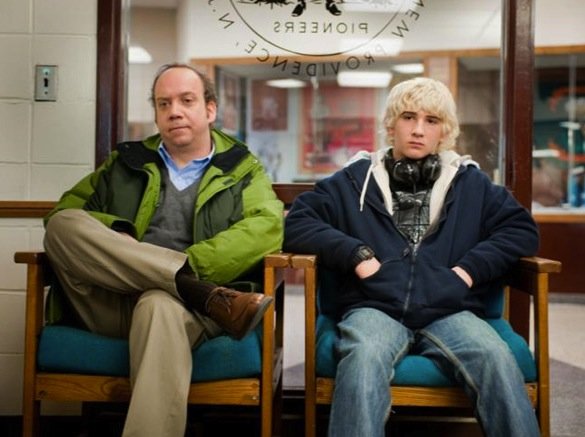 The boundaries of "doing whatever it takes to get by" change during times of financial hardship, a phenomenon that “Win Win” explores as it dramatizes the decision-making process in everyday life.

It's a quirkily amusing comedy-drama about real-world anxiety -- contemporary, compassionate, and convincing -- that's extraordinarily timely in its focus on coping mechanisms available to ordinary people during tough economic times.

Lead Paul Giamatti has brought his everyman persona to lots of memorable movies, including “Sideways” and “Cinderella Man,” for which he earned an Oscar nomination as Best Supporting Actor.

He does it again in “Win Win” as Mike Flaherty, a fortysomething elder-care lawyer with a foundering practice in suburban New Jersey with a wife and two young daughters.  Struggling to make ends meet, Mike is having occasional panic attacks, which he keeps from his wife, Jackie, played by Amy Ryan.

Already the volunteer head coach of the doormat wrestling team at the local high school, whose losing streak seems to be paralleling the one Mike is going through in his financial life, he offers to become the guardian of one of his elderly clients (Burt Young), a widower with dementia.

He is to get a monthly stipend for taking care of his senile client.  But although he accepts the money -- and here's where Mike's legal slope gets especially slippery while the moral and ethical corners start sporting cuts they've never displayed before -- he deposits his client in an assisted living facility, figuring that, given his condition, he'll never know the difference.

When the client's withdrawn teenage grandson from Ohio shows up at his doorstep, having run away from a broken home, Mike and Jackie take him in as a houseguest.

The situation seems to become win-win when Mike discovers that Kyle is a terrific wrestler who would undoubtedly become the star of the team.  Which he does after enrolling in Mike's school.

But just as the mired-in-last-place wrestling season gets turned around from a losing proposition to a winning one, Kyle's mother Cindy, played by Melanie Linskey, finished her rehab and needing money, shows up and demands the stipend for herself.

Flaherty's questionable business dealings, which had been forgotten in the excitement of a surprising push for a wrestling championship, are suddenly back in the middle of the mat.

The prolific Giamatti is characteristically terrific in the lead, delivering a flawed, all-too-human guy we root for whether he's doing the right thing or not.  He nails his three-dimensional character without fanfare or fuss.  As does the reliable Ryan, who matches him every step of the way, lending the film both a heart and a moral compass.  Their uncompromised marital portrait never has a false moment.  And Bobby Cannavale as Mike's neurotic, opposites-attract best friend and eventual assistant coach in tandem with Jeffrey Tambor, gets all the laughs that his amusing supporting turn calls for.

Director Tom McCarthy, an ex-actor who knows how to get strong work from his actors, co-wrote the screenplay from a story he co-authored with high-school wrestling teammate Joe Tiboni.  If the narrative arc is on the predictable side, the light touch that he employs, with humor that arises organically from the characters and situation, helps to give his film the feel of real life in every scene, including a form of redemption that borrows from real life rather than other movies.

This resonant character-based dramedy, featuring the remarkable Paul Giamatti wrestling with his conscience, is about as authentic as a movie can get.  Whether its title is meant ironically or not, “Win Win” lives up to it.