Last month, somebody left a package on the back step of Mt. Airy United Fellowship Church that, according to pastor Rev. Joe Williams, “proves there are angels out there.” 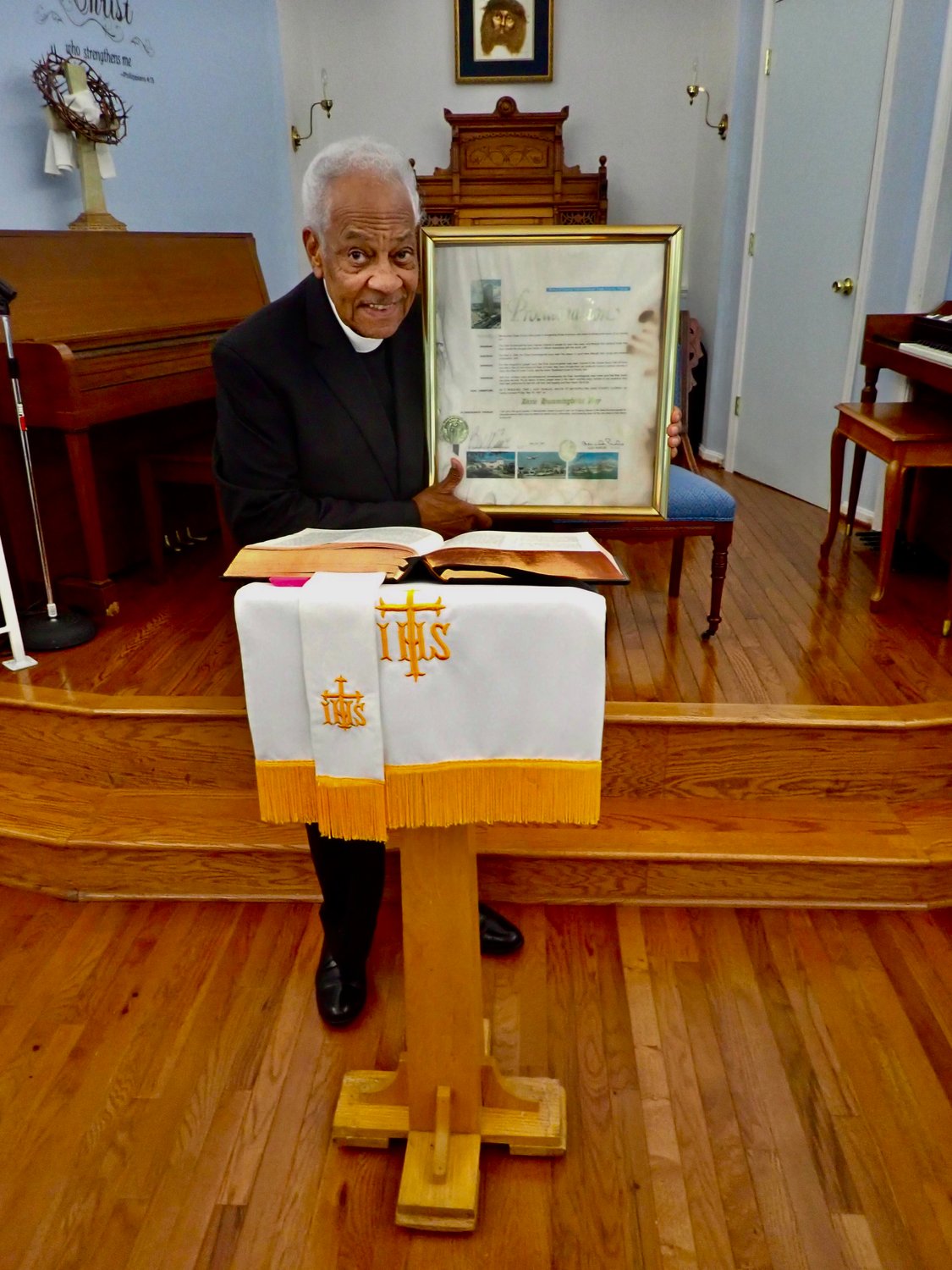 The Rev. Joe Williams, pastor of Mt. Airy United Fellowship Church, which he founded seven years ago at 701 W. Johnson St., holds the “miracle plaque” from 1997 that was recently left at the back door of his church.
Photo by Len Lear
Posted Thursday, November 10, 2022 12:00 am
by Len Lear

Last month, somebody left a package on the back step of Mt. Airy United Fellowship Church across from the Walnut Lane circle in W. Mt. Airy that, according to pastor Rev. Joe Williams, “proves there are angels out there.”

Williams, you see, isn’t just a pastor. He’s also a former member of the Dixie Hummingbirds, the longest running gospel group in the country. And for a man who just celebrated his 84th birthday, he said, what he found on the back step that day “may well be the greatest birthday present of my life.”

The gift was a very large plaque in a gilded frame, dated May 30, 1997. It was signed by Alex Panelas, who was at that time the mayor of Miami Dade County in Florida, and said that Metropolitan Dade County “honors the Dixie Hummingbirds” for their outstanding performances at the iconic, luxurious Fontainebleau Hotel on Miami Beach.

“I was at the ceremony in Miami in 1997 when we were given the plaque by the mayor,”  Williams said last week. “Then I never saw it again until a couple weeks ago, when it showed up at the back door of our church.”

Williams, who still has no idea who returned the plaque to him, has been able to put together at least part of the story about how it got there. And at its heart is an unnamed stranger with a kind heart, and a willingness to make an effort.

“I got a phone call a while back from a man who said he used to attend my church services more than 30 years ago when they were held at the Holiday Inn on City Line Avenue,” Williams said. “He would not give his name. He said he moved many years ago from Philly to Dade County, and that while there he wound up working for a company that was hired to clean out buildings. And that’s how he came across this plaque – he found it in the middle of a bunch of trash.”

Knowing that Williams had sung for the group, this “mystery man,” as Williams calls him, held onto the plaque, thinking that his former pastor might want it. And hold on to it he did, for quite some time. Five years, in fact.

“He was not savvy with computers or social media and had no way to contact me, especially since my name is Joe Williams, which is so common. There are literally thousands of us,” Williams said.

Then earlier this year, this unnamed person moved back to Philadelphia. By sheer coincidence, while listening to Black Music Month on the radio station WDAS, he heard Williams speaking about the history of gospel music and the Dixie Hummingbirds. When he heard that Williams was now the pastor of United Fellowship Church, he finally knew where to deliver the plaque he’d been carrying around all those years.

And that’s when the “mystery man” called Williams, and told him how he’d found the plaque in a basement, inside a bag full of trash.

“Quite a while after that, a church member called me to come and look because there was a large plaque at the back door,” Williams said. “ There was no note, and it was not wrapped up in anything. I could not believe it.”

Picking it up, Williams was flooded with a lifetime’s worth of precious memories.

“I guess you could say someone else's trash is my gold,” he said.

Like the time he was interviewed by Terry Gross on WHYY’s Fresh Air, just the second guest ever to appear on that iconic show. Or that day back in 1983, when the Philadelphia 76ers were playing the Los Angeles Lakers for the NBA Championship.

Williams, who had just joined the “birds,” got a call from a producer for The Wide World of Sports, who asked if they would sing a halftime song for the first game of the championship series. He said a gospel song would be appropriate since the 76ers' star center was named Moses Malone.

The gospel quartet sang their song, “Moses Gonna Take Us to the Promised Land,” to thunderous applause. The Sixers won that game, 113-107, and went on to sweep the series four games to none. And Moses Malone was named Most Valuable Player in the series.

Founded in 1928 by four North Philadelphia residents, the Dixie Hummingbirds are now found in the Guinness Book of World Records for having the longest running career of any such group. Williams was recruited by the group in 1983, was the first “birds” member not related to the original founders, and toured with them for 14 years. Some descendants of the original quartet are still performing.

In 2000, the Dixie Hummingbirds were awarded a National Heritage Fellowship from the National Endowment for the Arts, the country's highest honor in the folk and traditional arts. You can also see all the memorabilia of this group you could ever want at the National Black Music Museum and Hall of Fame in Nashville, where the Dixie Hummingbirds have their own display. And if you look closely, you’ll now see a plaque that proves the group got such an honor that day in Miami.

Williams drove down to Nashville to deliver it in person.