The last week of college summer league play before the July 4 break brought one major shake-up on Thursday, when the USciences alumni squad, Team Heather Maroon, suffered its first loss. 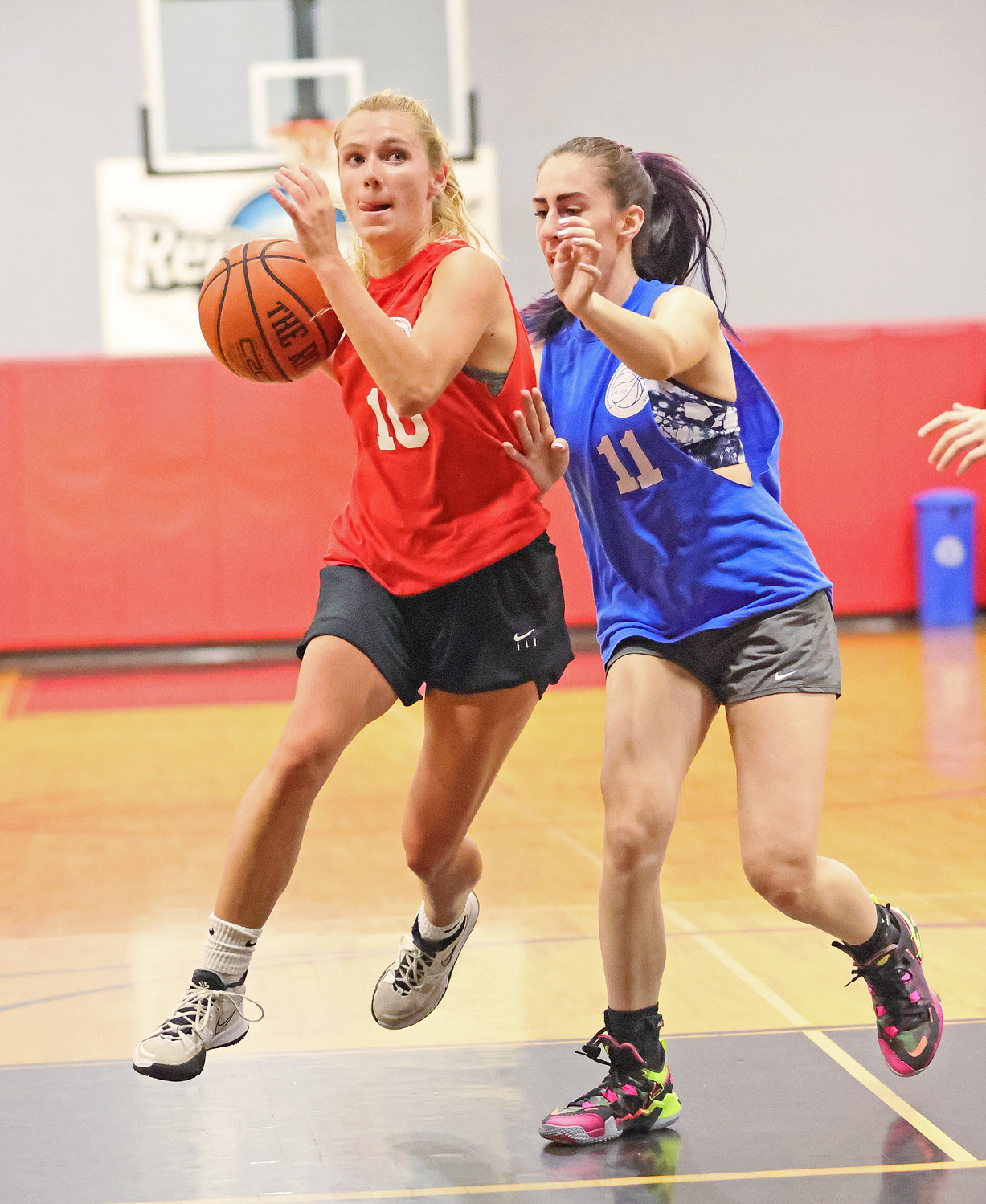 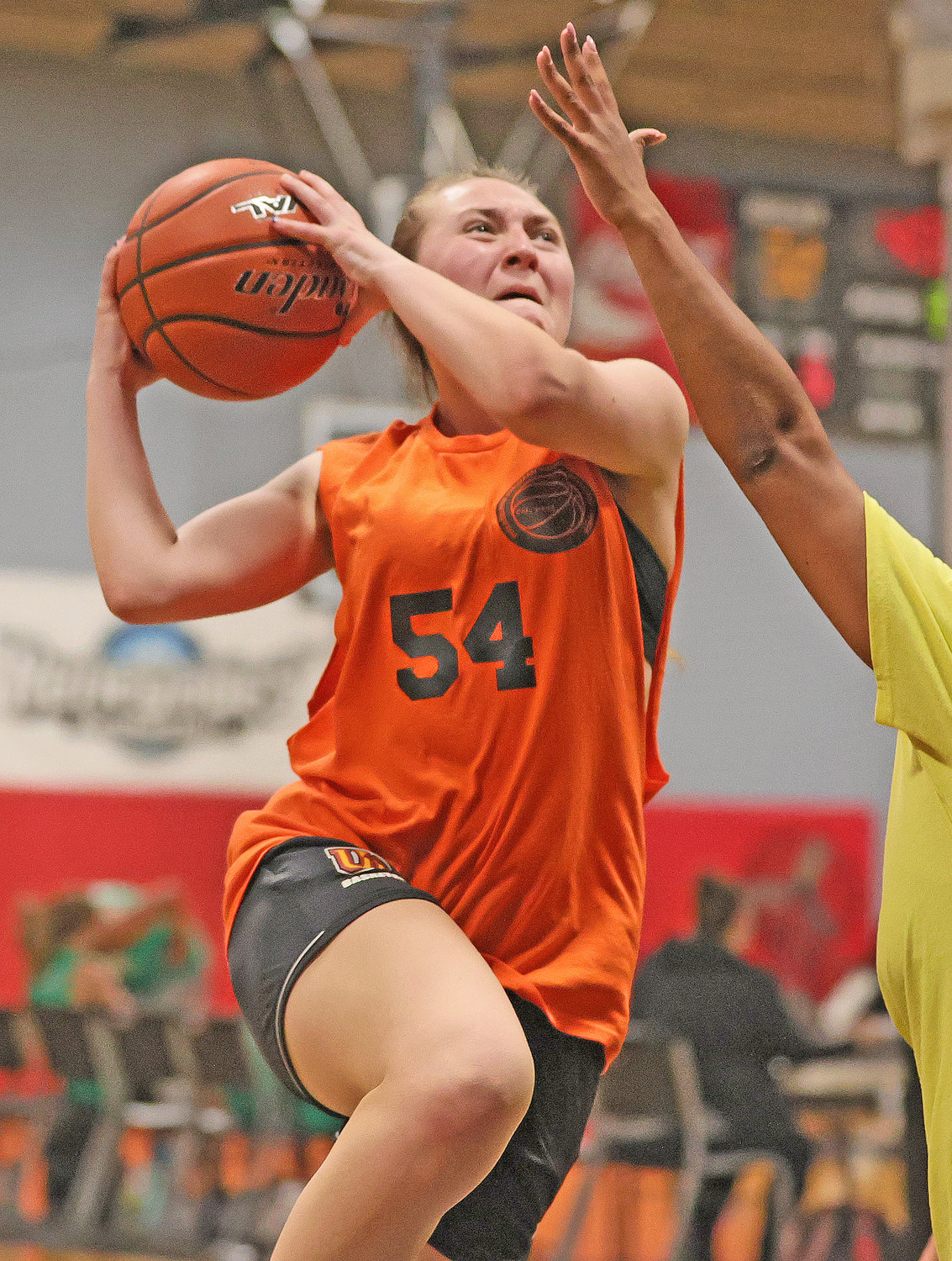 Going up for a shot for Team Orange is Ursinus sophomore Charlotte DiLello, a Germantown Academy alum.
Photo by Tom Utescher
Previous Next
Posted Wednesday, July 6, 2022 12:00 am
by Tom Utescher

The last week of college summer league play before the July 4 break brought one major shake-up on Thursday, when the USciences alumni squad, Team Heather Maroon, suffered its first loss of the season. The former Devils were decisively upended by Team Pink (Kutztown University), 71-49.

Heather Maroon still sat atop the standings with a 5-1 record. Team Red (Chestnut Hill College) and Team Black (Jefferson University) each won their games last Tuesday and Thursday. This gave Red a 4-2 record which put them in a three-way tie for second place with Team Pink and Team Columbia Blue (Holy Family University).

Team Black and Team Purple (West Chester University), which had a head-to-head meeting postponed earlier last month, each had 3-2 marks at the holiday break. The so-called draft teams, Kelly Green and Sun, are not made up of players from a single school, but were put together by league commissioner (and founder) David Kessler from a group of players who signed up individually.

Kelly Green, which includes Germantown Academy and Colgate University grad Alexa Naessens, was 3-3 at the end of June, while Sun, with GA grad and current Gettysburg College player Caitlin Priore on the roster, had a 2-4 record.

Two more GA alums, sisters Sarah and Charlotte DiLello, perform with their Ursinus College teammates on Team Orange, currently 1-5. Early in the season, Orange acquired its win in a game against the other Division II ball club in the league, the 0-6 Team Royal Blue (Arcadia University).

Most of last Tuesday's games in the league ended with predictable outcomes, as teams made up of players from NCAA Division II schools defeated ball clubs from Division III programs or the draft teams with their disparate group of athletes.

The exception was a clash between a pair of Division II ensembles, in which Team Pink (Kutztown University) edged out Columbia Blue (Holy Family University), 55-53.

In one of the early games, Heather Maroon raised its record to 5-0 with a 68-42 win over the Ursinus Orange. In the losing cause, former GA Patriot Charlotte Dilello scored nine points.

Chestnut Hill College's Team Red was still performing with out its vacationing conference rookie of the year, center Emily Chmiel. The Griffins' other 6'2" Emily, also a rising sophomore, is Emily Sekerak, and she scored 12 points in Red's victory over Royal Blue. The summer Arcadians trailed 44-19 at the half and fell, 83-60.

Orloski again led the Team Red scorers on Thursday, when the summer Griffins got past Team Sun, 61-54. In addition to missing Chmeil in the low post, Team Red also went without Sekerak and 5'11" forward Lindsey Lane.

The shortened CHC squad led most of the game, but only by single digits. Red was up five at halftime and only by two (46-44) at the start of the fourth quarter. The gap grew by five points in the final frame. Orloski, doing all of her scoring with two-point field goals, was balanced by senior Lauren Crim, who popped in four three-pointers for 12 points. Penn Charter grad Kait Carter (a junior) had eight points, as did senior Bri Hewlett.

GA alum Priore did not score for Sun, but the team high of 14 points belonged to one of her Gettysburg teammates, Emily Violante.

Ardcadia's Team Royal Blue was overmatched against Jefferson' Black squad, which built up a 21-9 advantage in the opening quarter and cruised to victory, 79-46. Nigro's team-high of 16 points all came on two-point shots. Meinel and fellow junior Emily Keehfuss each made a pair of three's, Meinel finishing with 14 points and Keehfuss with 12.

In a bout involving Division II players exclusively, West Chester Purple led going into the fourth quarter, but then was outscored 20-11 as Holy Family's Columbia Blue rallied to a 74-69 victory.

Through most of the season, the Heather Maroon team could count on good attendance from its group of alums, while Pink had some personnel shortages and played several games with only one or two subs. These patterns were reversed on Thursday, with Heather Maroon missing some power in the paint.

Pink gained a 31-20 advantage over the first two quarters, then really took control in a 28-12 third period. The Kutztown cadre didn't let up, winning by 22 points.

Dana Bandurick, a Swarthmore College post player, scored 10 of her 19 total points during the opening quarter to lead Team Kelly Green out to a 26-13 lead over Ursinus Orange. Orange didn't yield much ground after that, but eventually succumbed, 57-48. Two Germantown Academy alums on opposite sides each contributed five points, Naessens for Kelly Green and Charlotte DiLello for Orange.