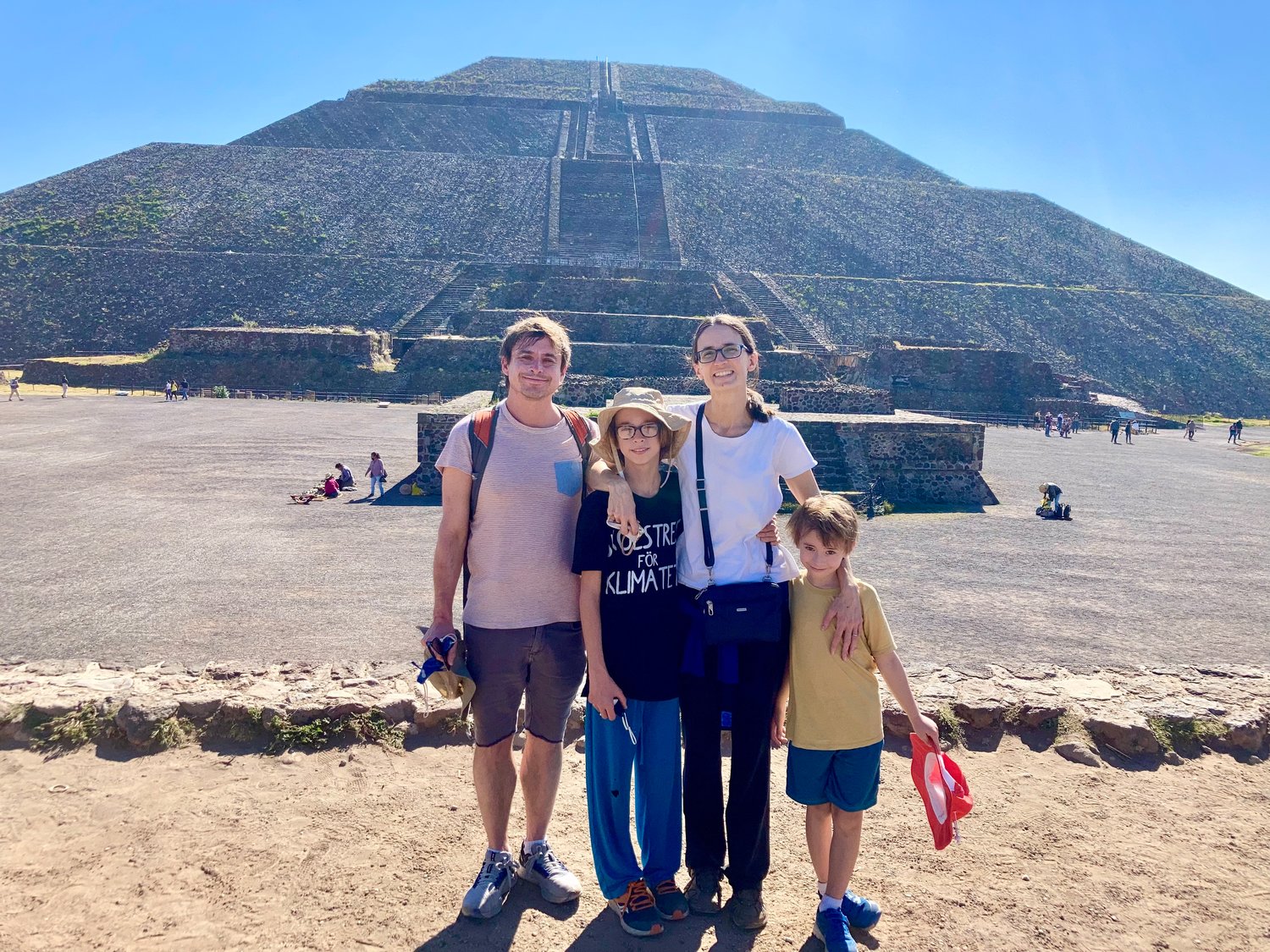 Francis Raven and Carolyn Kousky, of Chestnut Hill, recently took their sons Noah (second from left) and Nate to visit a pyramid in Oaxaca, Mexico. 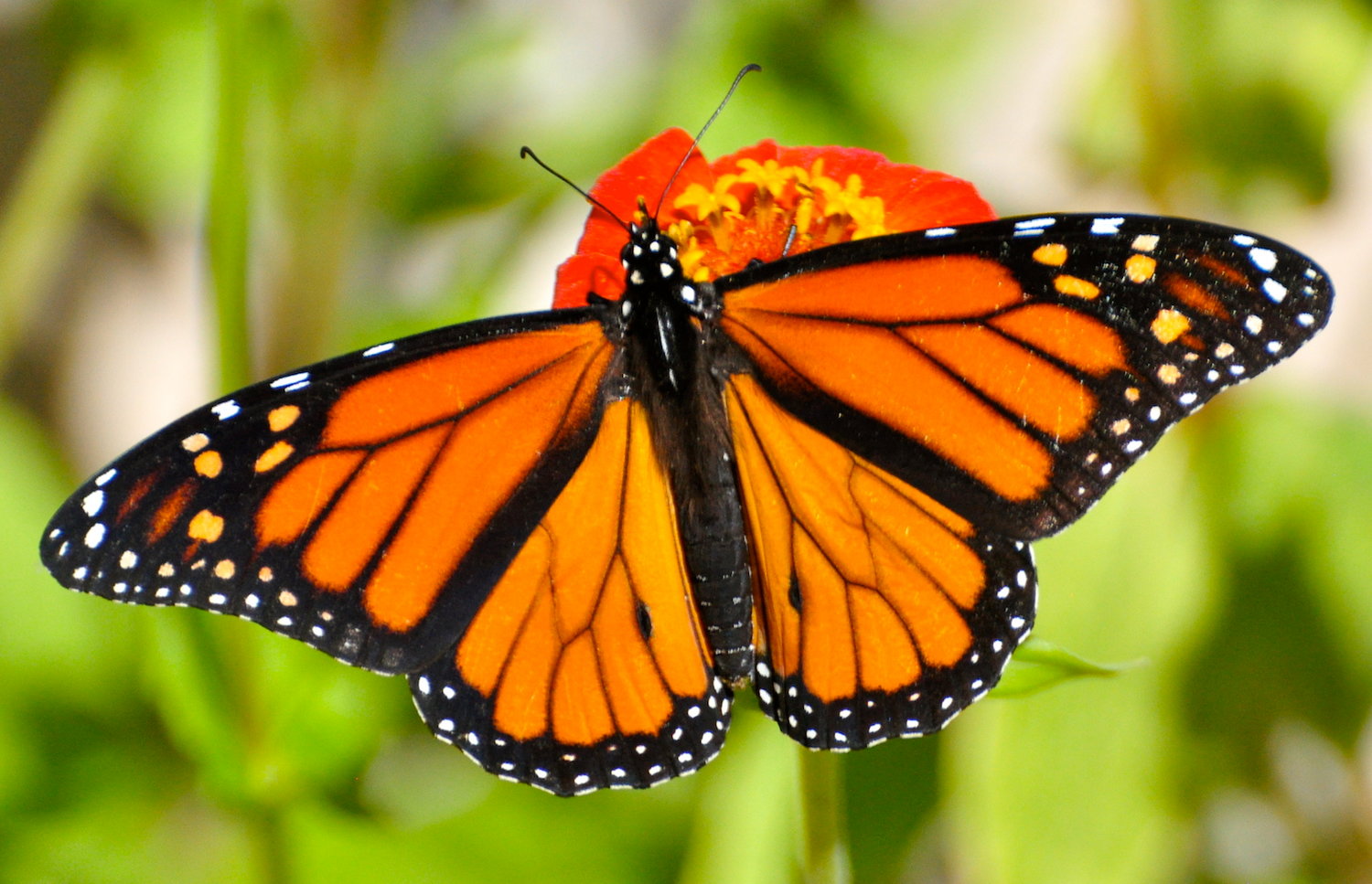 Monarch butterflies, which are in danger of extinction, are the inspiration for Noah’s new website.
Previous Next
Posted Thursday, June 30, 2022 12:00 am
by Len Lear

Chestnut Hill resident Noah Raven, whose last name already suggests a proclivity to help preserve wildlife, has started an initiative to save monarch butterflies. What is perhaps most remarkable about the efforts of Noah is that he is just 11 years old.

Noah has started a new organization, Monarch Defenders, and launched a website to go with it, encouraging young people across the country to help save the beautiful and fragile creatures. Monarch butterflies, which are readily identifiable by their two pairs of brilliant orange, black-veined wings with white spots towards the edges, are threatened with extinction due to climate change, pollution and habitat destruction.

Here’s how it works: people of any age, and from any place in the country, can become “Monarch Defenders” by planting micro-habitats of milkweed and pollinator plants. They will then be listed on an interactive map on Noah's website, which also provides information about the butterflies and other actions to help preserve them.

Noah, who is homeschooled by his father,  Francis Raven, said he got the idea on a family trip to Mexico.

“We went to the Piedra Herrada reserve to see the monarch wintering site. It was so amazing; the trees were weighed down with millions of roosting monarchs,” he said. “Driving up to the reserve, there were butterflies flying all around us, streaming down past the road to a water source.”

He and his family did some research, and learned that the eastern population of monarchs has fallen by 80 percent. According to the World Wildlife Fund, the western population of Monarchs will collapse within 50 years without emergency intervention.

“I desperately wanted to help them,” Noah said. “My mom and I were talking about what we could do to help and got the idea of a youth group.”

Noah, who just completed sixth grade, said he thinks it's important for kids his age to get active.

“There are lots of really big problems right now, including the loss of biodiversity, climate change, massive inequality and horrific school shootings,” he said. “It can be really scary and hard for kids my age to know what to do. I think that kids and teens need to be more involved in activism because our generation is going to bear the costs of these changes.”

Each fall, Monarch butterflies set out on an astonishing 3,000-mile or more journey from southern Canada to their wintering sites in the mountain forests of Mexico. This is one of the world’s longest insect migrations.

According to the World Wildlife Fund, “Without emergency help, it is almost certain that the western population of monarchs will collapse within 50 years.”

Noah’s interest in nature is not new.

When his mother, Carolyn Kousky, found out about an educational garden at the Highland train station, they volunteered to help since Noah was learning about native plants and pollinators at the time. He helped put mushroom plugs in the garden while his father helped plant trees.

He’s since convinced his extended network of family and friends to help out the monarchs.

“My friends have also planted milkweed and are helping me in the effort,” Noah said. “A few friends and I have an environmental group that meets once a month. Also, my family is helping. For instance, all of my grandparents have been really supportive.”

Noah taught himself how to use Squarespace, an online website building tool, in order to build his site.

Although he is young, Noah is already thinking about a college major and a career.

“I am really interested in Indigenous rights and Native American cultures,” he said. “I love archeology. I am also very interested in ecology and how different ecosystems work. I have been learning about how Indigenous cultures take better care of the earth ... I am very passionate about environmental activism and animal rights and I am a vegetarian. When I’m older, I really want to be a National Geographic explorer.”

For fun, Noah likes to play soccer with his best friend and swim with his dad and brother. But he admits that he is “not that into sports and am not that good at them.”

“We are very close,” Noah said, “We have developed a fantasy world together that we play and write about.”