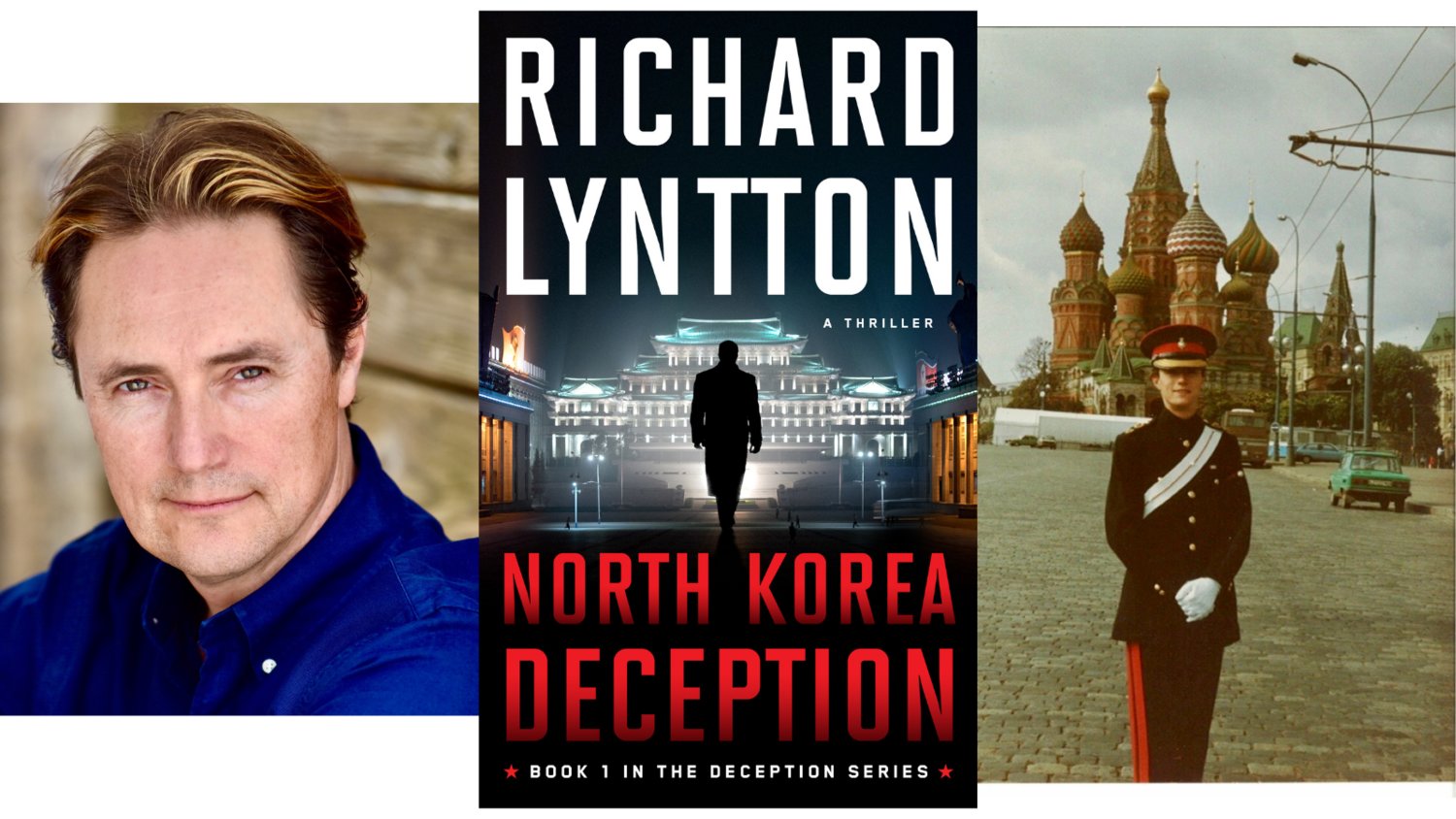 Richard Lyntton and one of his novels, which are based in part on his own experience as a British Army tank commander.
Posted Thursday, June 23, 2022 12:00 am
by Len Lear

He could also produce and perform in that story. He’s acted in more than two dozen films and TV shows including “Law and Order: SVU,” “Creed,” “Mr. Robot,” “Tom Clancy's Jack Ryan,” and “Blue Bloods.” He has performed opposite such stars as Woody Harrelson, Marisa Tomei, Jeff Daniels, Mariska Hargitay and Michael B. Jordan.

“My main claim to fame is that when we were making 'Welcome to Sarajevo,' I allowed Marisa Tomei to paint my toenails blue with white polka dots during a day off during filming.” he recently told the Local. “I also acted as Woody Harrelson’s dining interpreter because I spoke Bosnian and he didn’t.”

Lyntton's latest project is promoting a non-fiction history book by his great-aunt, Margaret “Flo” Bramford, “From Cottage to Palace.” The book, which documents her life spent serving in the royal household for two Queen Elizabeths, is now at number one in the country on Amazon’s best sellers list for English travel.

“She purchased her first TV set at age 92,” he said. “I promised her before she died at age 94 that I would publish all her books one day on Amazon, for the whole world to read.”

Lytton’s life of extraordinary twists and turns, which eventually led him to settle in Montgomery County, began humbly in London.

Lyntton’s mother was a single parent who worked in the same bank for 20 years. “She was an ardent theater-goer, London park-walker, church-goer and pub-goer, all often in the same day,” he said.  Lyntton did not really know his father. “I only met him twice,” he said.

Lyntton caught the acting bug at the University of Exeter, where he performed in Gilbert and Sullivan musicals and Russian plays.

Lyntton started his military service as a captain and tank commander in the British Army in the first Gulf War, in the same regiment that Prince Harry later joined. He was subsequently appointed a United Nations Liaison Officer.

It was in 1996, while serving as Liaison in Sarajevo, that he was abducted. He was commanding a small British army team on routine patrol, escorting gasoline in and out of the city. They didn’t know it, but the front line had shifted 100 to 200 meters overnight, so they had inadvertently wound up in Bosnian Serb territory.

“We were arrested for spying, and taken to a local school where a Bosnian Serb English teacher came to interrogate us,” he said. “But my Bosnian was better than his English, so we just chatted in Bosnian. Our weapons and my video camera were confiscated and we were given a Bosnian Serb army ‘chit’ for my video camera and tapes to be returned after the war.”

They were released by nightfall.

“I recall showing the Bosnian Serb colonel a postcard of Trooping the Colour that I had received from my mother that morning,” he continued. “‘Look,’ I said. ‘Here's a postcard from my mother. If I was a spy, I wouldn't be carrying around correspondence from my mother’!”

He eventually became a U.N. Military Observer and a U.N. television producer, where he witnessed and filmed human rights abuses during the Bosnian war. He was later called to testify at the International War Crimes Tribunal in the Hague, and his films are currently archived at the Imperial War Museum, London.

“We filmed the aftermath of a massacre in which members of the Croatian militia had burned villages and slaughtered old people,” Lyntton said. “One victim had his throat slit, and one had a bullet in the back of the head. In the space of one day, we filmed the massacre, interviewed the victims’ relatives, interviewed the commander we suspected of organizing the 'cleansing' and escaped with our footage to be aired on international television news.”

When asked if acting in movies is as glamorous as most moviegoers think it is, Lyntton replied quickly, “Yes, it is! There is NOTHING like being on a film set. I have been doing it for 20 years, and the artistic and technical collaboration of any indie, network TV or feature film production never fails to amaze and blow me away. It’s a bit like being in the Army; you have a mission and a goal with many different players but in an artistic way, of course. Day or night, boiling hot or freezing cold, exhausted, everyone has to keep going to finish the shoot. It is a true collaboration.”

Lyntton has also written novels such as “Hyde Park Deception,” which is set in the Bosnia War and draws on his service in Sarajevo and true events, such as the Sarajevo Market massacre, and peace negotiations with convicted war criminal Dr. Radovan Karadžić. He also filmed a BBC documentary, “Living with the Enemy,” which provided the inspiration for his books.

How did this British actor, author and soldier wind up living in the Chestnut Hill area for the past two decades?

“In 1999 I was hired for an acting gig in New Zealand,” he explained. “It was a live 'role-play' for senior CGI corporate executives. They switched locations at the last minute, and we ended up in Philadelphia. The only thing I knew about Philadelphia at that time was the movie with Tom Hanks and cream cheese.”

While here, Lyntton went to the Marmont bar in Old City (it’s still there) and met the woman who eventually became his wife,  interior designer Michelle Wenitsky.

“She is the true talent of our family,” he said. “My first line was 'You look like that girl from 'Sex and the City.' What’s her name?' Michelle replied, 'Sarah Jessica Parker. That’s my favorite show.'

Twenty years and two sons later, we are still happily married and living right outside of Chestnut Hill!” (Richard and Michelle's sons, Blake and Stefan, are graduates of Germantown Academy.)

For more information, visit richardlynttonbooks.com. Len Lear can be reached at lenlear@chestnuthilllocal.com