It was a good week's work for the boys' soccer team at Springside Chestnut Hill Academy, which had started the stretch with an Inter-Ac League record of 1-3-2. 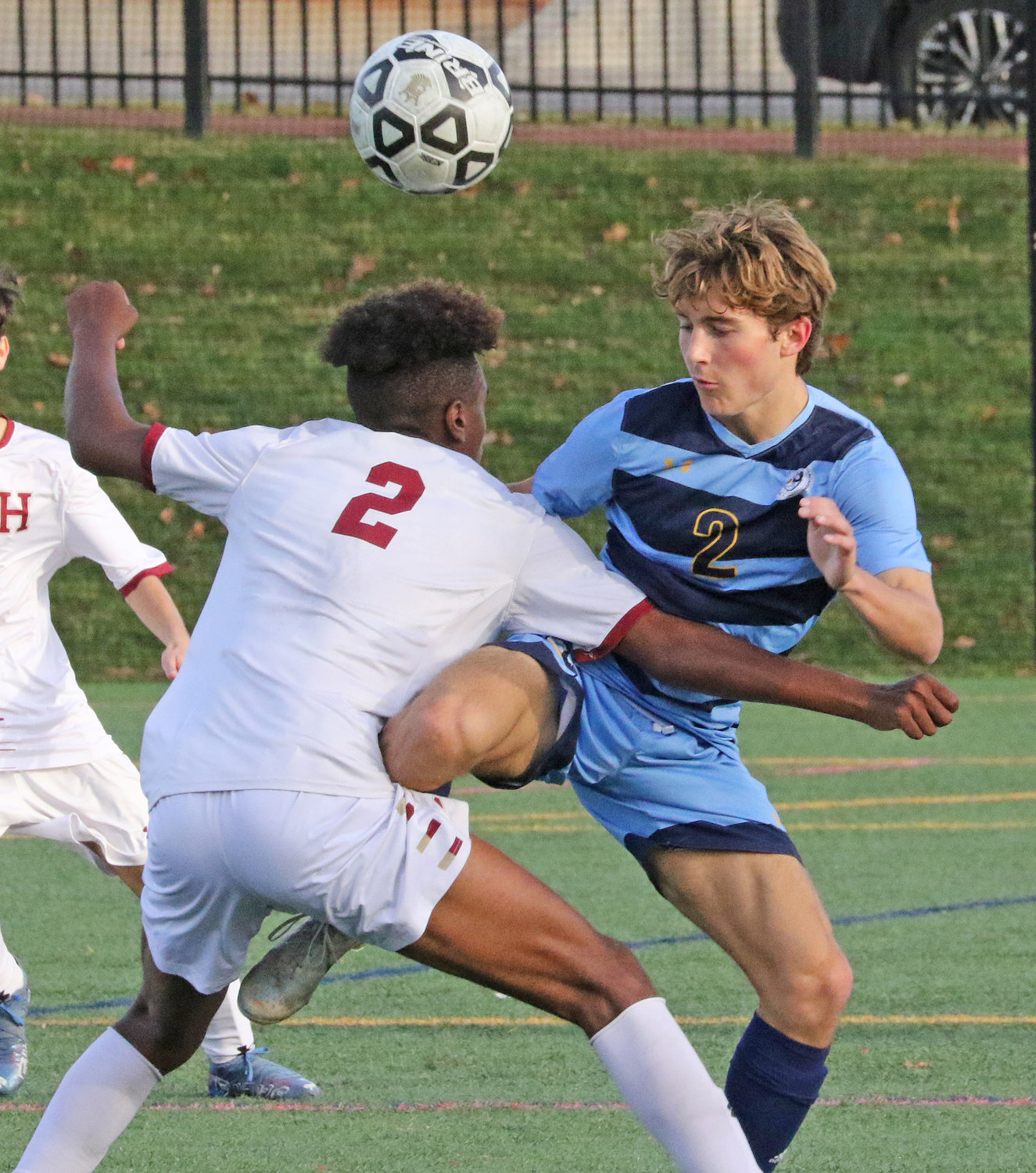 While the soccer ball hovers nearby, SCH senior Colin Woehlcke and Haverford's Papi Harris appear to engage in some form of mixed martial arts match.
Photo by Tom Utescher 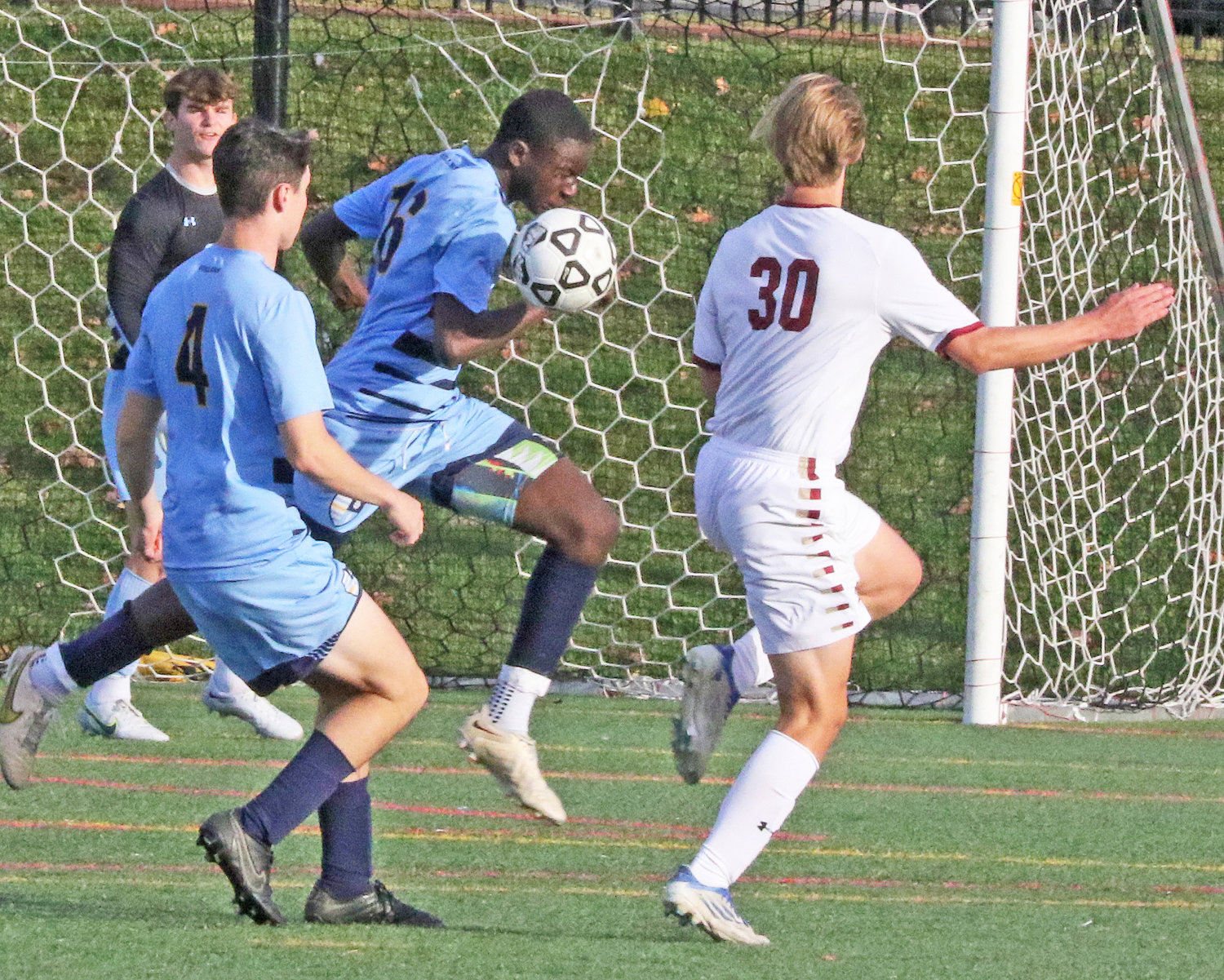 It was a good week's work for the boys' soccer team at Springside Chestnut Hill Academy, which had started the stretch with an Inter-Ac League record of 1-3-2.

On the road last Tuesday, the Hillers earned their second league victory with a 1-0 verdict over second-place Germantown Academy, and back home on Friday afternoon they battled to a 1-1 tie with league leader Haverford School.

After Friday's draw, Haverford still topped the Inter-Ac rankings with a 6-1-1 mark. On the same afternoon GA rebounded from Tuesday's setback to beat Episcopal Academy, 4-1, so the Patriots stayed right behind the Fords with a mark of 5-2-1.

The game-winner for SCH on Tuesday came from senior Chris Metsikas early in the second half at GA.

Friday's meeting with Haverford back at SCH started with a stretch of offensive activity for the hosts. Early attacks included a sequence featuring a good cross from the right wing by senior Danny Heep, setting up a header by his classmate Colin Woehlcke that was saved by Fords goalie Connor Cresswell.

Haverford scored its goal with 11:17 remaining in the first period. SCH's freshman goalie, Cole Carberry, was covering the angles near the right post and could not quite leap over to stop a ball that slid under the middle of the crossbar.

With a goal in hand at the start of the second half, the Fords played disciplined soccer and controlled the ball well in transition sequences. The Hillers soon stepped up their energy level on attack as they sought the tying goal. It came 11 minutes into the second period, with junior Zayd DeVeaux scoring out of a scrum of players in the box as Haverford's Cresswell lost his footing.

One of the Fords picked up a yellow card with 21:46 remaining in regulation, but the visitors weathered the penalty. Play ranged back and forth, mostly between the 18's, but the home crowd got a scare when Haverford broke into the SCH box on the left and junior striker Sebastian Perez-Gasiba blasted a ball just outside of the right goalpost.

On an SCH rush with under 10 minutes left, the Fords' Cresswell advanced far out of the goal and collided with a charging Juan Jose Hardy. Hardy, a Blue Devils junior, was shaken up and came off the field, but was able to return a few minutes later.

In the last five minutes Haverford had two corner kicks but did not get off a serious shot, and on an SCH direct kick from the outside with a minute to go the served ball was punched away by Cresswell. The contest proceeded into the standard Inter-Ac 10-minute overtime with no golden goal.

When one of the Hillers was slapped with a yellow card early in the first OT segment, Haverford's free kick didn't result in a shot. A little later, another restart kick for the Fords sent the ball wide to the right of the goal. At the other end Cresswell came out of the Haverford net during an SCH attack and the ball got behind him. The visitors escaped damage as a kick and then a header by Hillers senior J.T. Hughes were both near misses.

In the second OT Haverford got a throw-in far down the left sideline near the corner, but could not capitalize on Fred Jordan's long heave into the box. In a skirmish right in front of the SCH cage there was a chest-high bounce and Perez-Gasiba was almost able to body the ball into the goal. Springside Chestnut Hill's Carberry was able to grab it just in time.

The two teams kept attacking right to the end. A long serve by the hosts sailed in on Haverford's Cresswell and he punched the ball away, and as Carberry came out of the SCH goal to counter a charge by the Fords the visitors hit a shot far over the crossbar.

The outcome didn't lift the Devils into the upper reaches of the Inter-Ac standings, but they had proven they could play right along with the league leader.