The girls of Germantown Academy had played a number of close soccer games against league rivals when they arrived at Springside Chestnut Hill Academy last Friday. 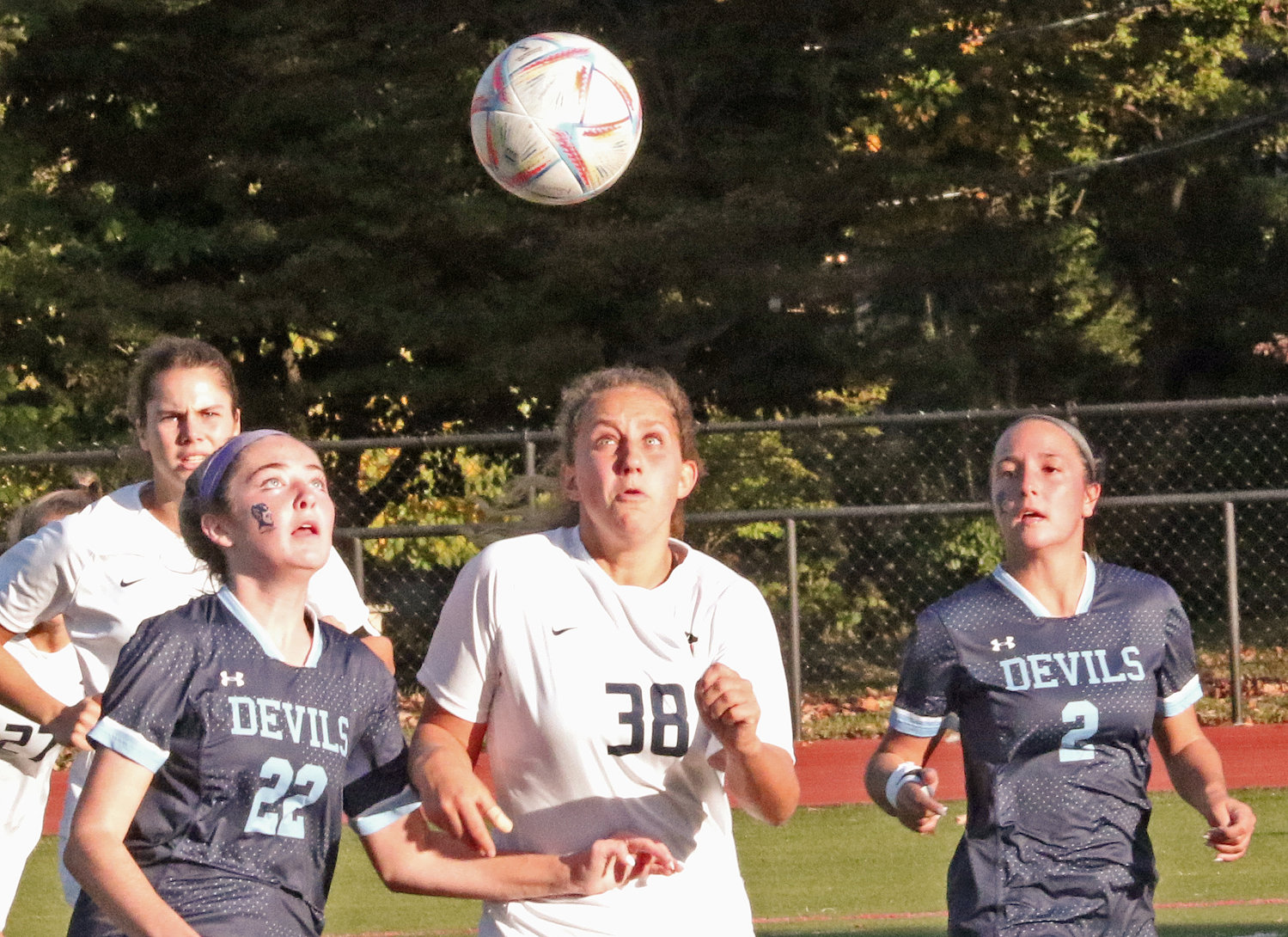 SCH senior Amanda McNesby (left) and GA junior Izzy Casey focus on the ball. At right is SCH senior Lisa McIntyre, back on the field for the first time following an injury.
Photo by Tom Utescher 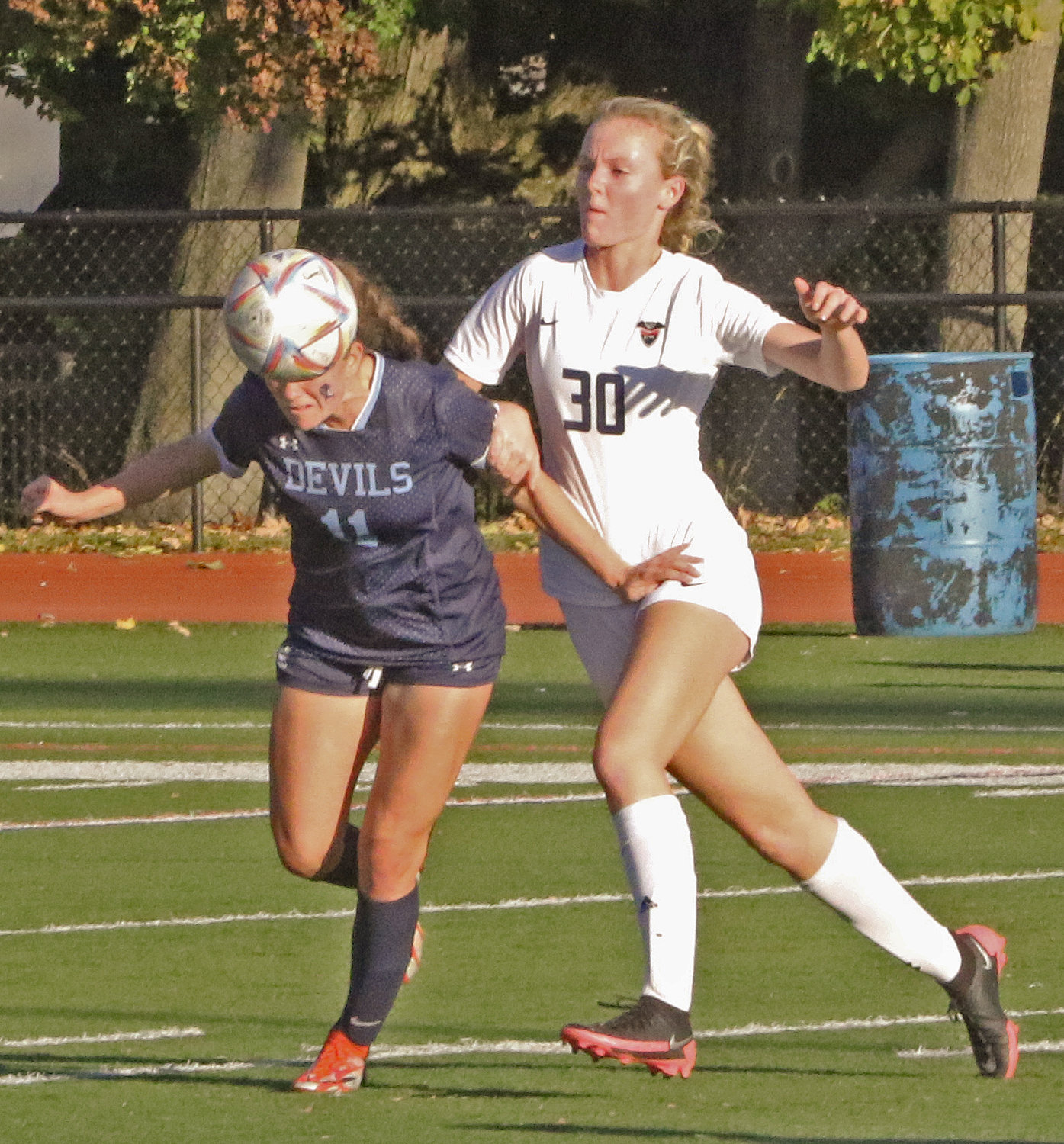 The girls of Germantown Academy had played a number of close soccer games against rivals within the Inter-Ac League, but the Patriots still owned a 1-8 record (5-10-2 overall) when they arrived at Springside Chestnut Hill Academy last Friday to take on the first-place Blue Devils.

In the first half, visiting GA battled defending league champion SCH to a 0-0 draw. In the second half, however, it seemed like someone wrenched open the scoring fire hydrant and Blue Devil goals came gushing out. With a 6-0 victory, SCH upped its league record to 8-0-1 and was 14-1-2 overall.

The game marked the return to partial duty of SCH top scorer and University of Maryland recruit Lisa McIntyre, a senior who missed several games due to strained ankle ligaments. Before getting hurt, she had scored the lone goal in the Blue Devils' 1-0 overtime victory over another serious contender for the Inter-Ac title, Episcopal Academy.

During McIntyre's absence, SCH saw the lone blemish appear on its league record, a tie against Agnes Irwin School. That means that if Episcopal wins this week's rematch with SCH, the Churchwomen would be ahead of the Devils in the league standings.

First, though, Springside had to take care of business against GA last Friday. The Patriots, wisely, took a defensive stance, making the occasional foray on offense but mainly forming a bulwark in the back against the SCH attack.

The Blue Devils started earning corner kicks early in the first half, but on restarts and in real-time play they could not get anything past GA's sophomore goalie, Gabby Bowes. Late in the half McIntyre had a promising chance on a high one-touch volley in front of the visitors' goal, but the ball was blocked by junior Izzy Casey of GA.

Another SCH senior, Bella Brown, launched a solid shot over the crossbar, and soon halftime arrived with the score still 0-0. A number of the Devils had been blasting the ball at the GA cage; it was suggested to them that more of their customary finesse was called for.

On an early rush in period two the Blue Devils were halted by an offsides call, then they didn't get off a shot on a corner kick. They kept attacking, and from up along the right endline Brown booted the ball across the face of the goal. Senior Abby Kenkelen was waiting at the far post, tapping in the eventual game-winner with just under five minutes elapsed.

Two minutes later the teams set up for an SCH corner play. The initial serve into the box hit the head of a defender, Casey, but the Devils kept the ball in play in the box and senior Mary Trudeau fired into the upper left corner to make it 2-0.

After that, Germantown came out of its defensive shell and made more offensive gestures as the middle of the period approached. On a direct kick from the outside, senior Taylor Weiss propelled the ball toward the goal, but SCH sophomore keeper Gracyn Lee-Torchiana pulled down the ball.

As usual, she had replaced senior starter Ellie Stratz at halftime.

As the clock cut into the final quarter of regulation time, the hosts were back on the attack. Running onto a loose ball in front of the cage, junior Brynn Donohue made it 3-0 with 18:18 remaining. GA changed goalies, but would give up another three goals after the switch.

The clock had only gotten down to 17:44 when SCH acquired a fourth goal.

Brown brought the ball along the left wing and dispatched it into the middle for senior Julia Thomson to finish the play.

GA had an excellent opportunity to spoil the home team's shut-out when a penalty kick was awarded to the Pats with 14:33 to go. Freshman Anna Weber's shot was directed low to the left, but Lee-Torchiana was able to stretch out on a dive to tip the ball out beyond the post.

A number of the Blue Devils' starting field players were out of the game at this stage. Sophomore Zarin DeVeaux posted the fifth SCH point with 5:56 remaining, and the last goal came from freshman Jillian Major at 2:34.