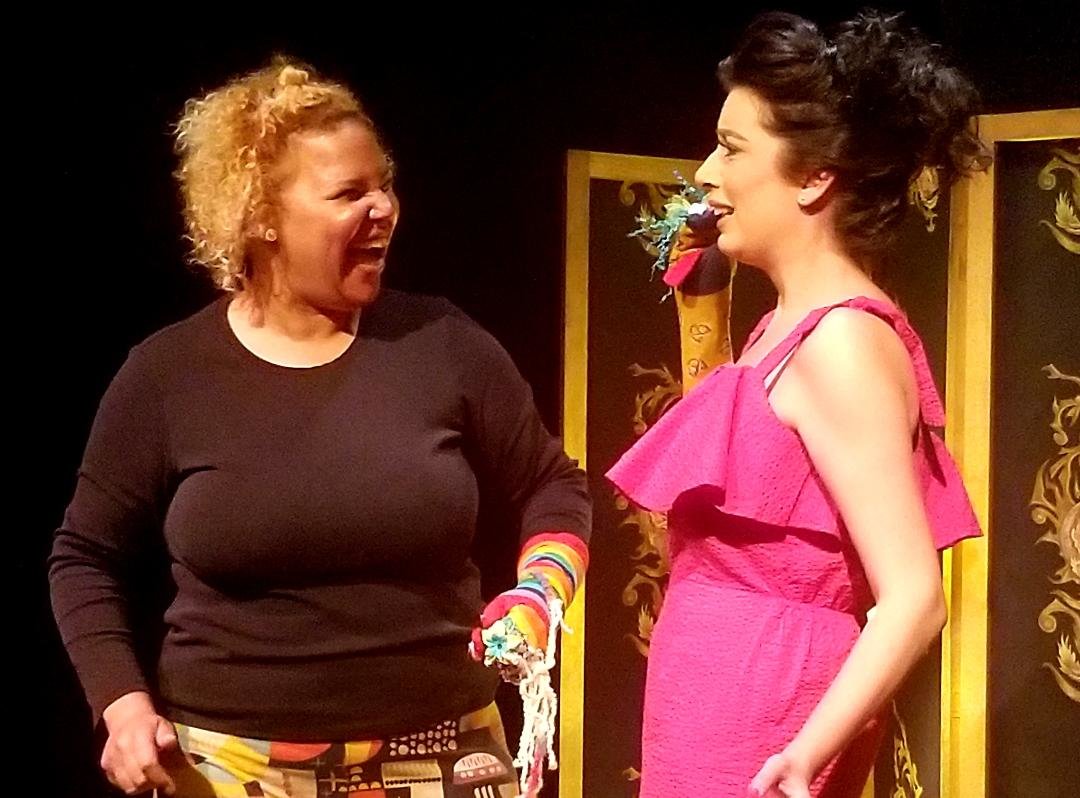 Brie Knight as Pickles and Kellie Cooper as Ella. Photo by Josh Hitchens 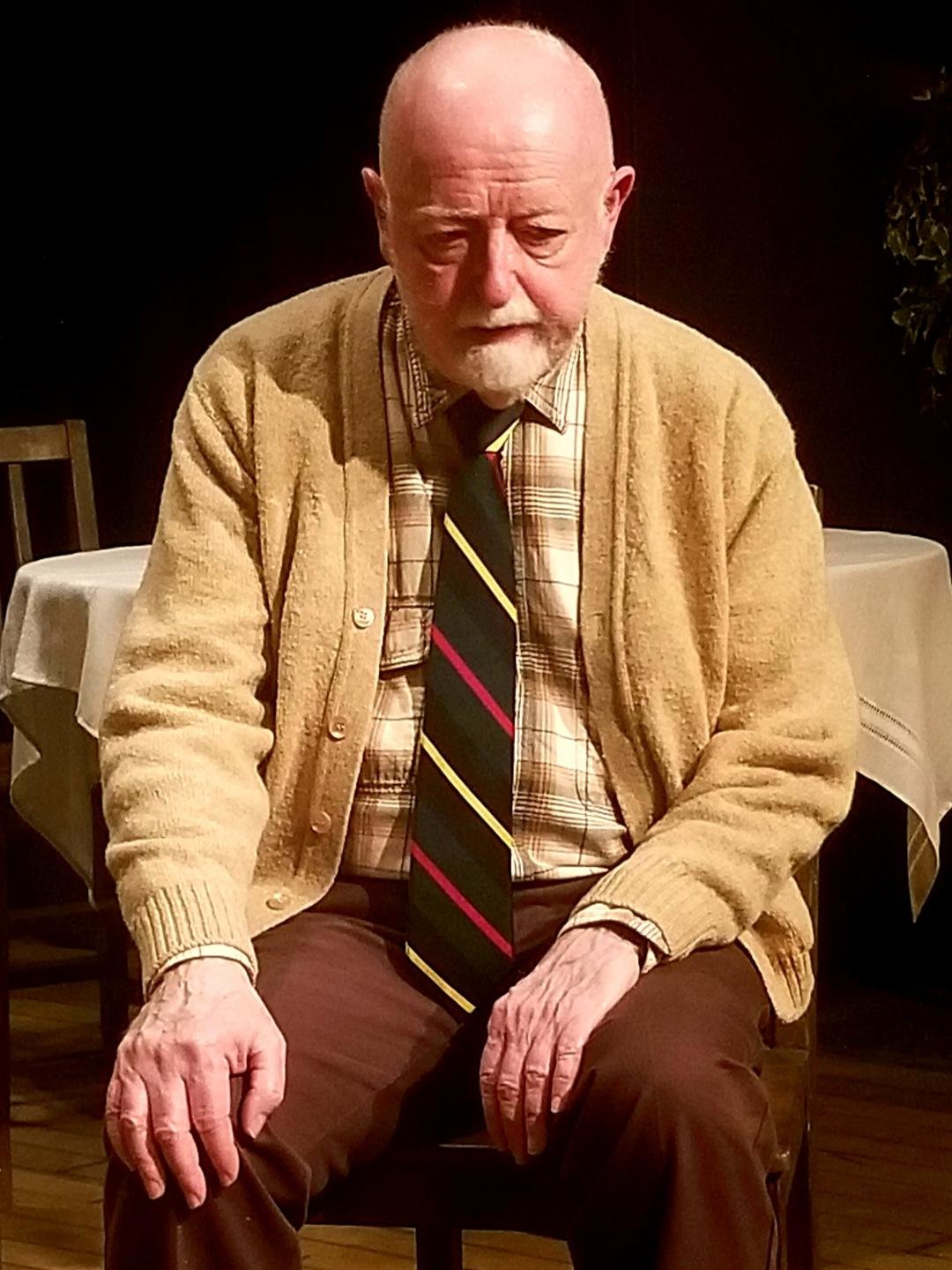 Robert Bauer as The Professor. Photo by Josh Hitchens 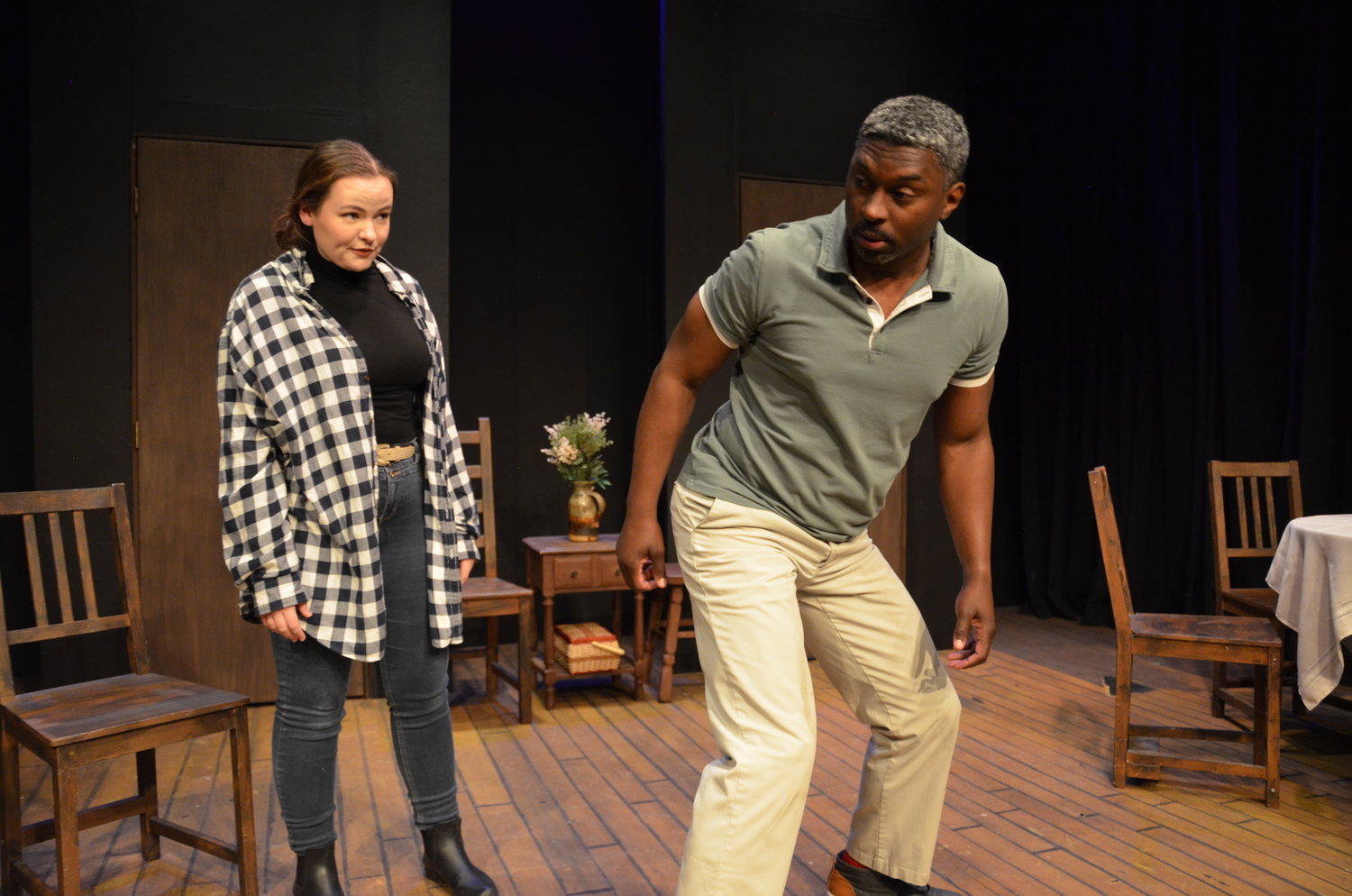 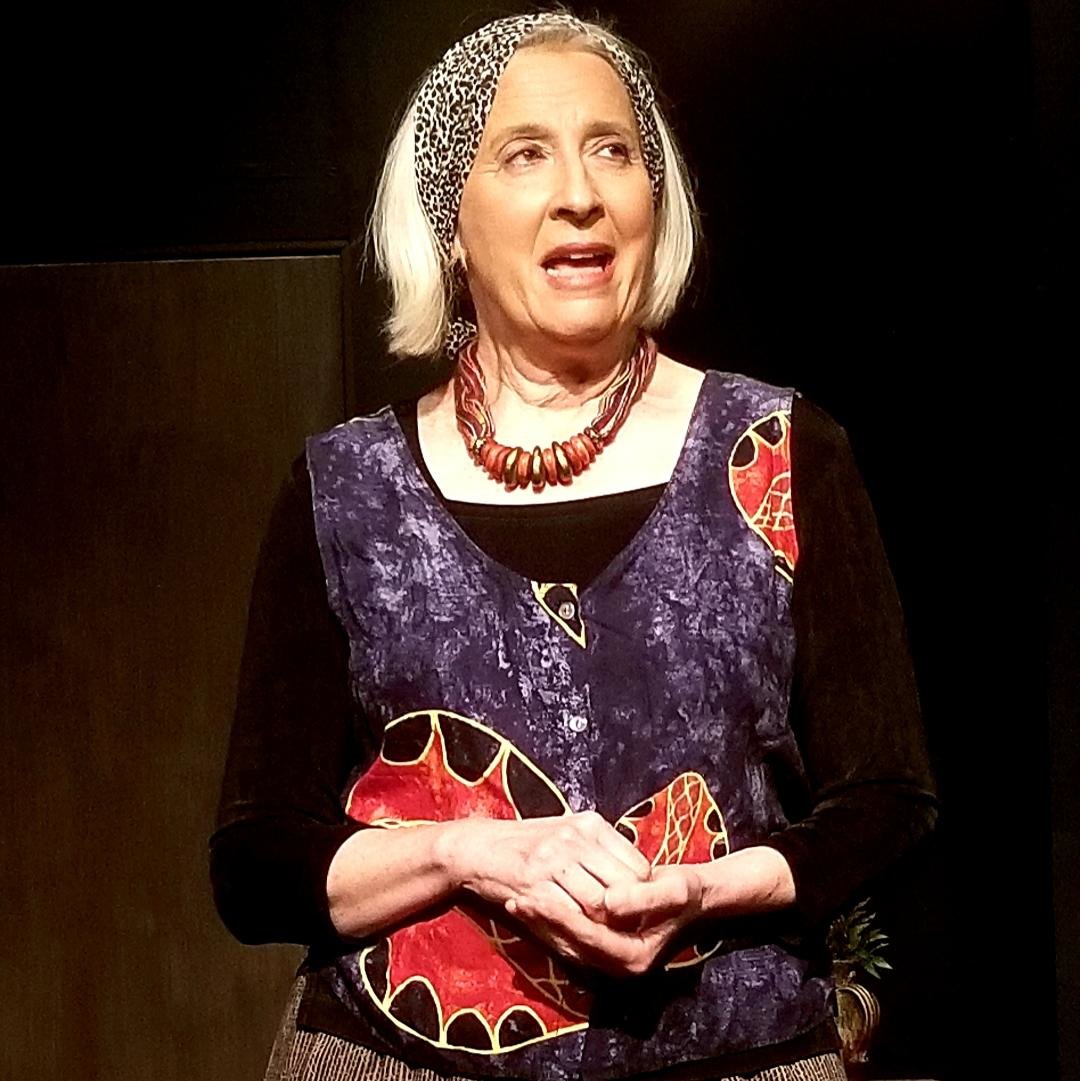 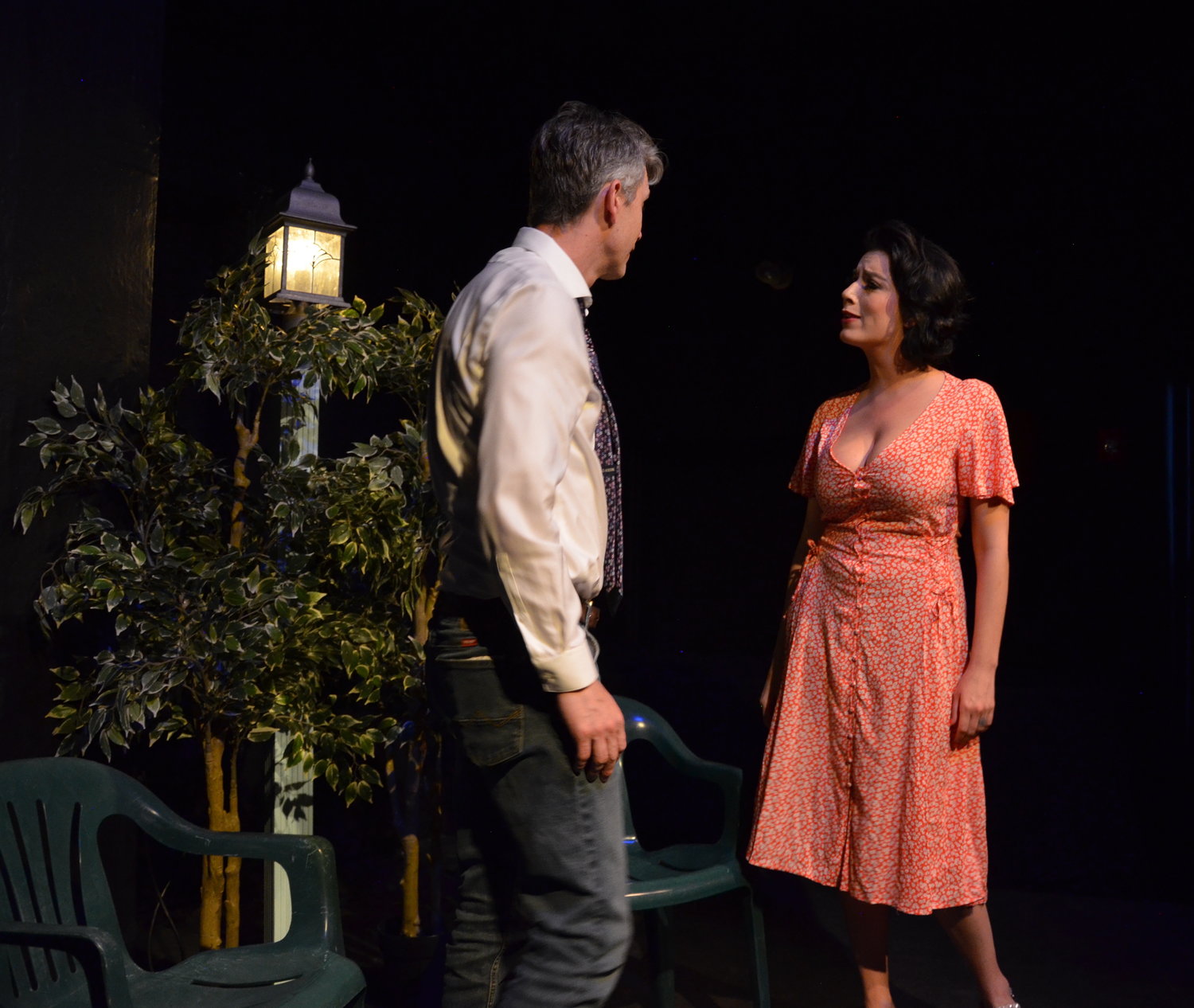 Dante Zappala as Vanya and Kellie Cooper as Ella. Photo by R. Cline
Previous Next
Posted Tuesday, May 17, 2022 12:00 am
by Hugh Hunter

"Life Sucks" by Aaron Posner opened at Allens Lane this weekend, a contemporary remake of Anton Chekhov's "Uncle Vanya." Director Robert Bauer creates a show that is engaging on its own terms.  Equally, it makes you want to revisit the original.

Posner sticks to the outlines of Chekhov's story, a love triangle involving Vanya,  Dr. Aster and Ella, the young wife of an elderly professor. As in all Chekhov plays, the yearnings of characters are laid bare but there is little consequential action.

Kellie Cooper has the good looks and presence to play Ella. Though not flirtatious, Ella infatuates all men while plain-Jane Sonia (Kiera Sheehan) is madly envious. Yet Ella does not have a high opinion of herself.  Bored and bemused, Cooper's Ella sees that the people around her do not know what they want.

Vanya (Dante Zappala), Sonia's uncle, is the most confused. This long-suffering steward of the family estate hates the privileged, pedantic professor (Robert Bauer).  Yet there is something so sympathetic about Zappala's Vanya that his violent eruption comes as a shock.

Dr. Aster (Marc C. Johnson), Vanya's best friend from childhood, ignores the available Sonia but is smitten by Ella. Young Pickles (vivacious Brie Knight) and older Babs (Marjorie Goldman) round out this household of distraught melancholics. Pickles cannot move past a failed love relationship, while Babs' credo is "move on" past suffering.

Director Bauer keeps a brisk pace with a shower of snappy character confrontations that begin or end in monologues presented as a direct audience address. The use of “Beatles: Guitar Instrumentals” by Fred Benedetti & Peter Pupping helps flesh out a feeling of modern discontent.

Posner subtitles his play as "sort of adapted" from Chekhov but he does something more radical, distilling "Uncle Vanya" down to what he sees as its essence - the idea that life is inherently tragicomic. Sure, the tragicomic is Chekhov's calling card, but he does more.

Chekhov has a superb sense of place and, almost in passing, defines the social-political morass of Russia at the turn of the century. (Happily, Chekhov died young and did not live through what was to come.) This Russian ambiance is lost in translation and Posner's "Uncle Vanya" could take place anywhere, from Kalamazoo to Timbuktu.

But that is what Posner wants, a version that makes the audience focus on the universal. The Allens Lane production is graceful in the way it constantly breaks the fourth wall, Bertolt Brecht's "alienation effect," which argues the purpose of theater is to make you think.

It comes to a head in the final scene, "What, Am I Supposed To Feel Sorry For You," where Vanya is forced to hear the suffering of others. In a play this cerebral, it is surprisingly affecting. The ensemble then turns to the audience and demands to know what they think of life. Quite a few were stirred to answer.