An exploration of deindustrialization on Hill stage

An exploration of deindustrialization on Hill stage 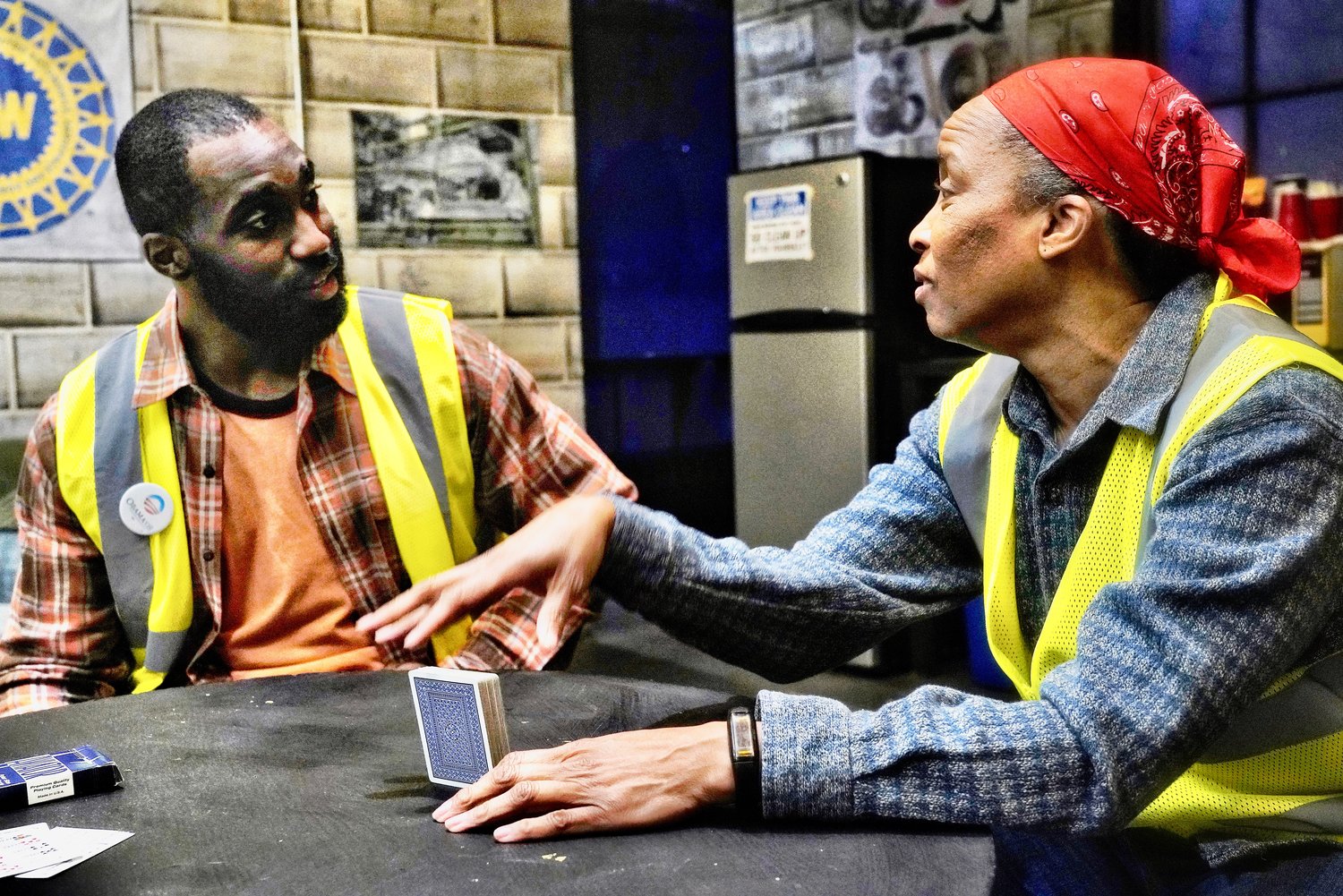 Angela Cooper and Omar Bullock lament their bleak work situation in a closing plant in “Skeleton Crew,” now at Stagecrafters until Feb. 20. Photo by Joanne Davis
Posted Wednesday, February 9, 2022 12:00 am
by Hugh Hunter

In "Skeleton Crew" now running at Stagecrafters, an unseen management trims staff as it prepares to shut down one of Detroit's last surviving auto-stamping plants in 2008. At the outset, playwright Dominique Morisseau seems to be gearing up to tackle the big issue of America's massive deindustrialization.

But the issue is not truly tackled. As Dez puts it, "We all have stresses, and this plant closing is just one of them." The plant closing turns into background noise as Morisseau presents a slice-of-life canvas, four African American characters who bustle in and out of the employee break room to joke, argue and get to know each other's secrets.

Patricia Masarachia's bunker-like break room is expressive, and director Connie Norwood's dynamic cast gives this play a pulse. Faye (Angela Cooper) is an earthy middle-aged worker who has survived 29 years at the plant. She has a personal relationship with Reggie (Kyle Paul Dandridge), a white-shirt-and-tie foreman with conflicting loyalties.

Dez (Omar Bullock) and Shanita (Shawneka Ponder) are a younger pair. Shanita is a pregnant woman on the verge of single motherhood, and a proud and conscientious worker. Dez impresses the viewer as mercurial and flirty with  dubious plans for self-advancement.

Everyone in "Skeleton Crew" has a secret and in monologue confessions reveal his/her vulnerability. At other times they refer to dangers lurking outside the workplace. Faye says, "Used to be you could offend somebody without losing your life." Dez fights off street thugs; Shanita complains of road-rage drivers.

As characters struggle with a mix of inner and outer demons, they become likable, and you feel yourself pulling for them. But while Morisseau succeeds in creating a heady atmosphere, there is little plot and consequential action.

Depression-era playwrights like Arthur Miller created works that showed the destructive impact great economic forces had on ordinary people. Likewise, the last 60 years of deindustrialization have destroyed thousands of small towns and trashed major cities. Who is our Arthur Miller today?

Not Dominique Morisseau. Like so many modern playwrights, she explores the pathos of a particular group identity, and in "Skeleton Crew" the nation-wide impact of deindustrialization takes a backseat to a celebration of black resiliency.

True, her break room surges with energy. Morisseau's four characters are like a jazz quartet where each member plays their own riff on the theme of surviving in a hostile world. And she routinely uses street language with lyrical force.

But "Skeleton Crew" loses sight of the big problem. In a curious happy ending, workers learn someone has succeeded in taking a vengeful swipe at management. They exit the break room in jubilation, as though this triumph is more important than the closing of the plant itself, now in full swing.