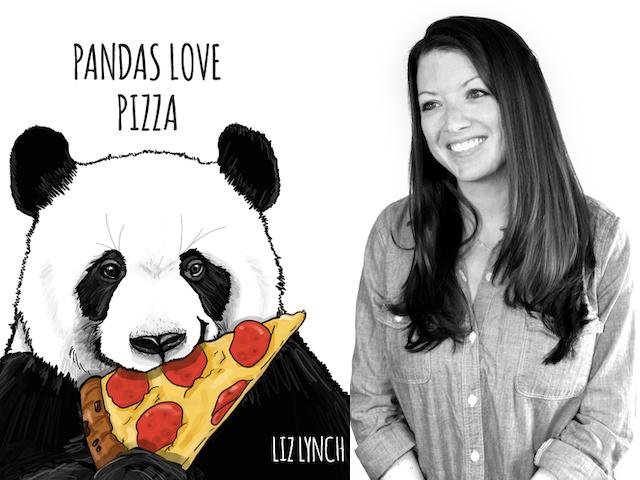 When Chestnut Hill illustrator Liz Lynch, 37, won the first place prize for drawing at the recent Fall for the Arts festival on Germantown Avenue, it could not have surprised anyone who is familiar with her whimsical, brilliant artwork, most recently featured in her latest book, “Pandas Love Pizza,” which officially came out on Nov. 15 of this year.

Lynch, a Hill resident for eight years, already has a legion of fans from her previous illustrated children’s book, “Pandas Love Pickles,” which came out in December of 2017 and has so far sold more than 20,000 copies. (“Pandas Love Pizza” is sold in several stores throughout our community, including Villavillekula, Robertson's, all Nesting House locations and Just Jane. In addition to local stores, she sells her books from PandasLovePizza.com and Amazon. The book has also been sold at Anthropologie and is included in the children's book club membership, Literati.)

It is almost impossible not to smile when viewing Lynch's delightful, charming, life-like drawings of a giant panda, meercat, sloth, etc., chowing down on a slice of pizza. I would not be surprised if a national pizza chain approached her with an offer for her artwork that she could not refuse.

Where did the offbeat idea for “Pandas Love Pizza” come from?

“Typically, trying new foods for little kids can feel pretty scary,” Lynch explained last week. “I wanted to show that trying new foods is very accessible and fun for young children, particularly picky eaters. I also decided that I wanted to keep the panda on the cover so pizza was a pretty easy choice, being that most kids can relate a positive experience to eating pizza! If pizza is a safe food, maybe a silly animal trying avocado, beets, falafel or other healthy food options won't seem so intimidating.

“My ultimate goal in creating these children's books is to provide as many learning opportunities and tools as possible without seeming overly dense. I feel ‘Pandas Loves Pickles’ and ‘Pandas Love Pizza’ both accomplish this perfectly. A child can read these books and learn the alphabet, sounds that letters make, explore different animals and foods, maybe even cook something they saw in the book, all without feeling like a lesson is being forced.”

Lynch grew up in upstate New York, just outside of Rochester.

“We were looking to move from Hoboken, New Jersey, for job reasons, and fell in love with this area while visiting my husband's family here.”

The local author has a degree in studio art from Lafayette College and told us in a previous interview that illustration has always been her passion, and publishing a children's book has always been her goal. She went the self-publishing route because it potentially offers the most money. But it's also labor-intensive.

“I worked really hard at it from start to finish,'' Lynch said. “I worked so hard, and I was so close to it for so long.”

Lynch and her husband, John, have two children, 6-year-old Ellis and Everett, who is 3-and-a-half. John is the vice-president and management director at Calcium, a healthcare marketing agency. He works directly with clients to help create advertising content and is the operations manager of Liz’s book business.

Lynch’s own favorite illustrator is the legendary Maurice Sendak.

“There is something so whimsical about his illustrations that I feel capture your imagination in a way that really sets him apart.”

Lynch has plans for another food-themed book, as well as a counting book that has a funny twist.

What is the hardest thing Lynch has ever done?

“Learning the economics of the European Union in French while studying abroad in Paris my junior year of college was really hard, but flying solo with two toddlers is hands-down the most difficult thing I think anyone can do.”

What is the best advice Lynch has ever received?

“Don't wait to do what makes you happy.”

If Lynch could live anywhere on earth, where would she choose?

“The easy answer is the beach because I always feel recharged and inspired when I'm there.”

Lynch will be at the Erdenheim Holiday Market this December signing books, as well as the Nesting House in Mt. Airy. Visit PandasLovePizza.com for more information. Len Lear can be reached at lenlear@chestnuthilllocal.com