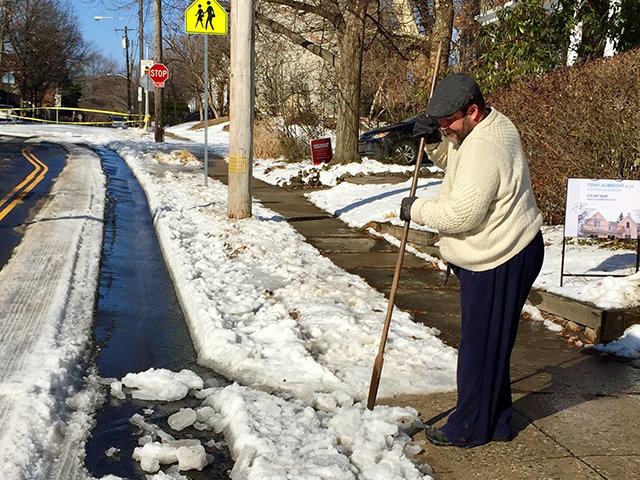 Ardleigh Street resident Chris Mattingly looked out his window on the morning of Dec. 31 and noticed a growing iceberg on the west side of his street. A river was making its way down the street’s slope, past the Water Tower and down to Hartwell Lane.

“I called the fire department to close the road,” he said. “I spent most of a day helping people whose cars had gotten stuck on the ice. I told them if they didn’t close the street, they’d just have to keep coming back to rescue people.”

The Fire Department blocked the street but did nothing to stop the flow of water, which turned the entire block into a sheet of ice many inches thick. And it persisted until warmer temperatures finally made the road passable on Friday, Jan 12.

“It had gotten to the point where my family was calling it Ice River,” Mattingly said. “My kids would say goodnight to it before they went to sleep.”

“It was a tough two weeks for people,” said Mattingly’s neighbor, Judy Muenzberg. “Most people who lived here had to park their cars elsewhere.”

Mattingly and Muenzberg said that, as far as they were aware, no one had lost water service. The source of the water was not a water main but a pipe feeding a fire hydrant at the corner of Gravers Lane and Ardleigh Street.

The leak, which occurred during a record-setting cold spell in which temperatures were barely above 0 degrees, was one of hundreds – if not thousands – received by the Philadelphia Water Department. Laura Copeland, a Water Department spokeswoman, told the Inquirer last week that the department was fielding an average of 20 calls a day to report burst water mains and residential pipes.

No neighbors reported a loss of water service because of that leak as of this writing.