The field included large public high school teams from as far away as Easton, Pa. 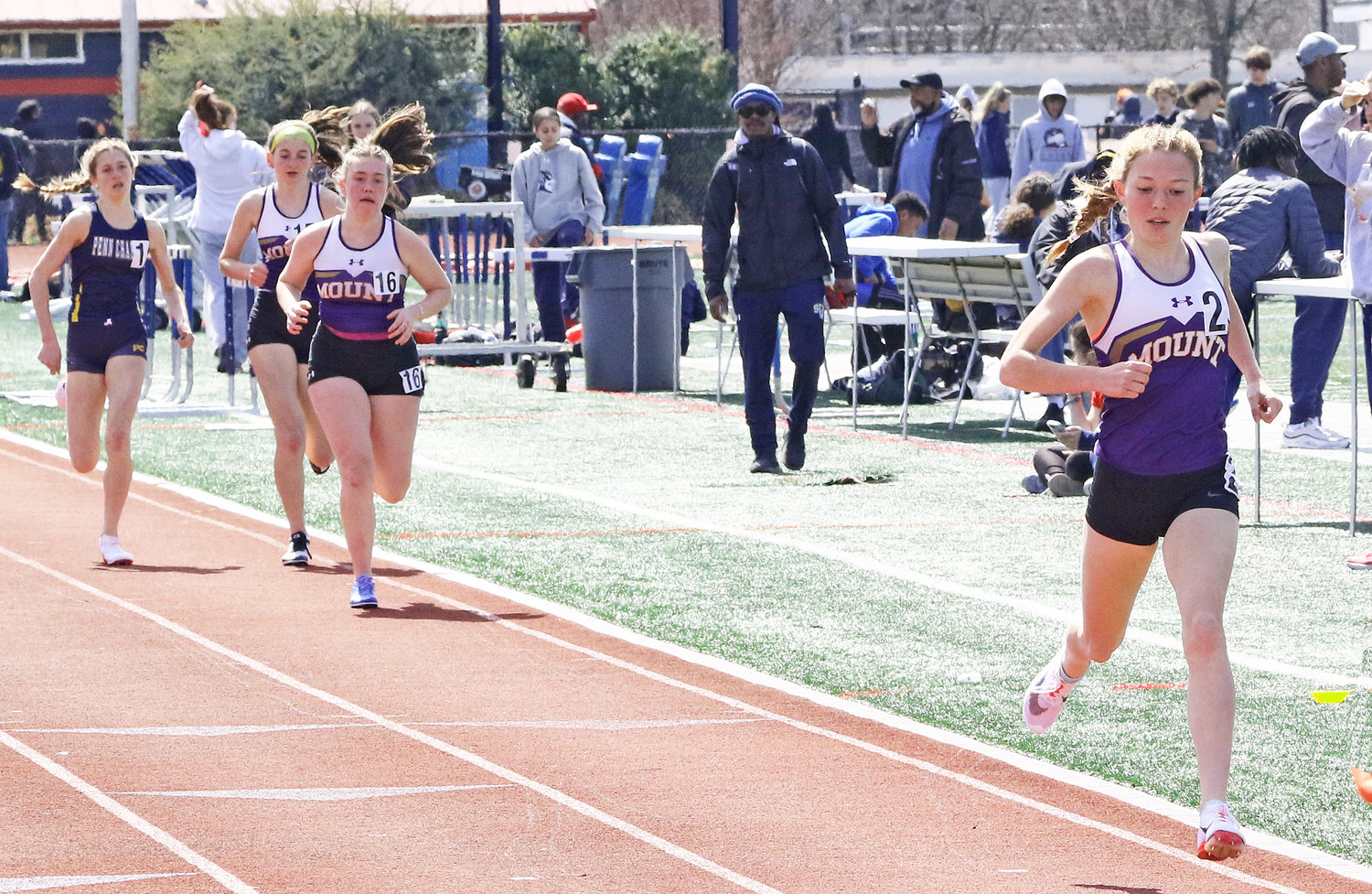 Just before her victorious finish in the 1600 meters, Mount sophomore Ella Woehlcke lapped a few of her own teammates. Photo by Tom Utescher 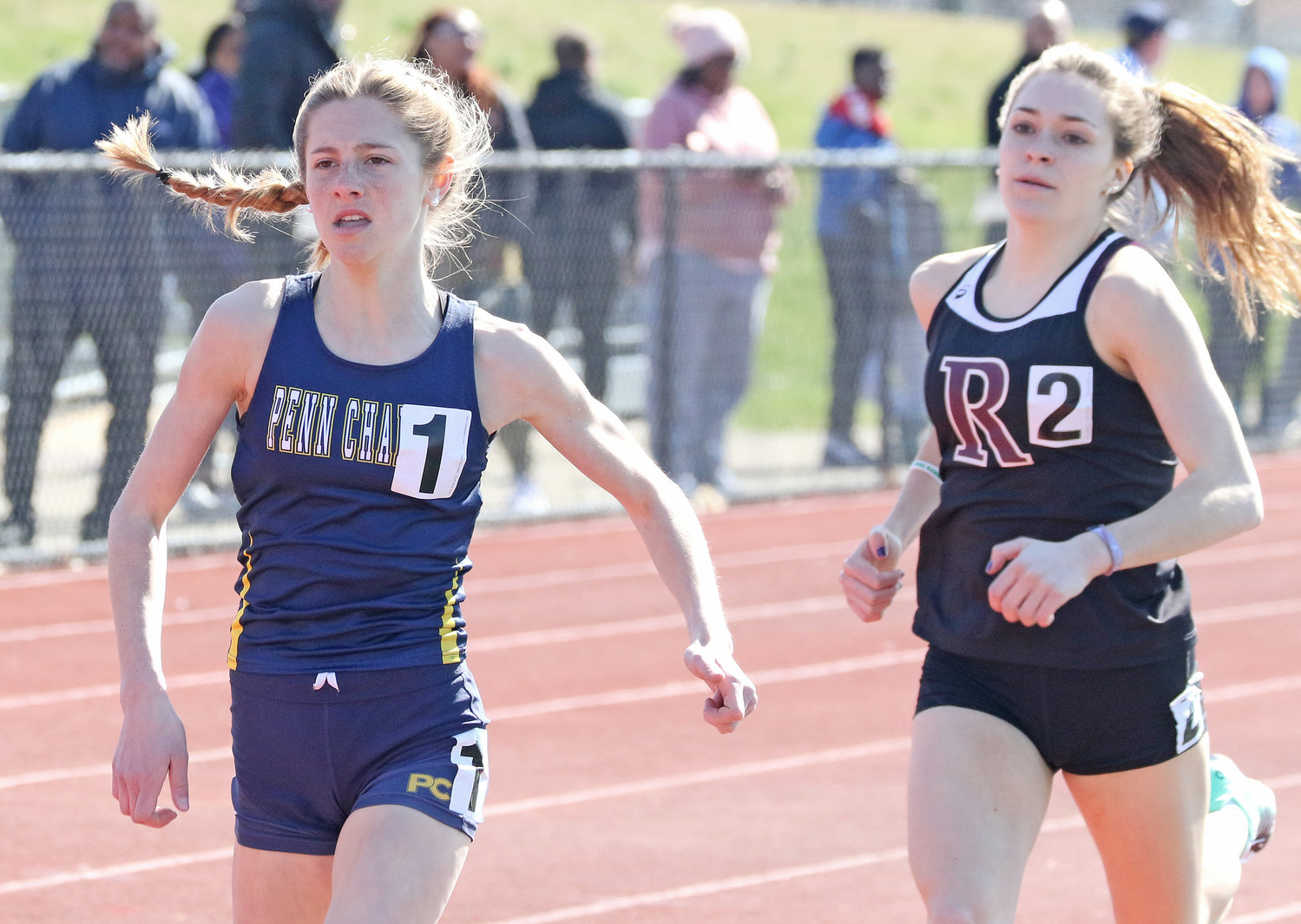 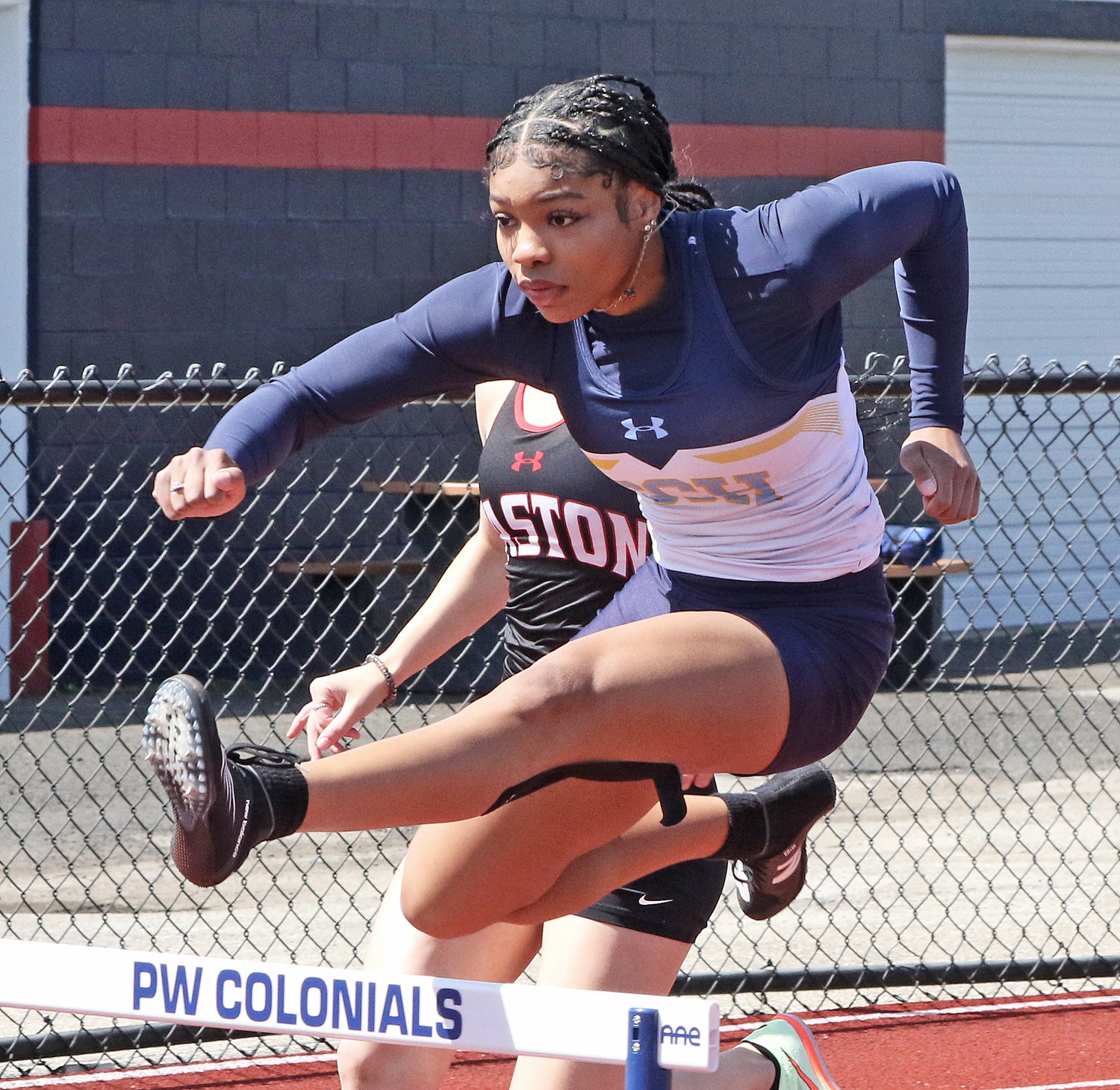 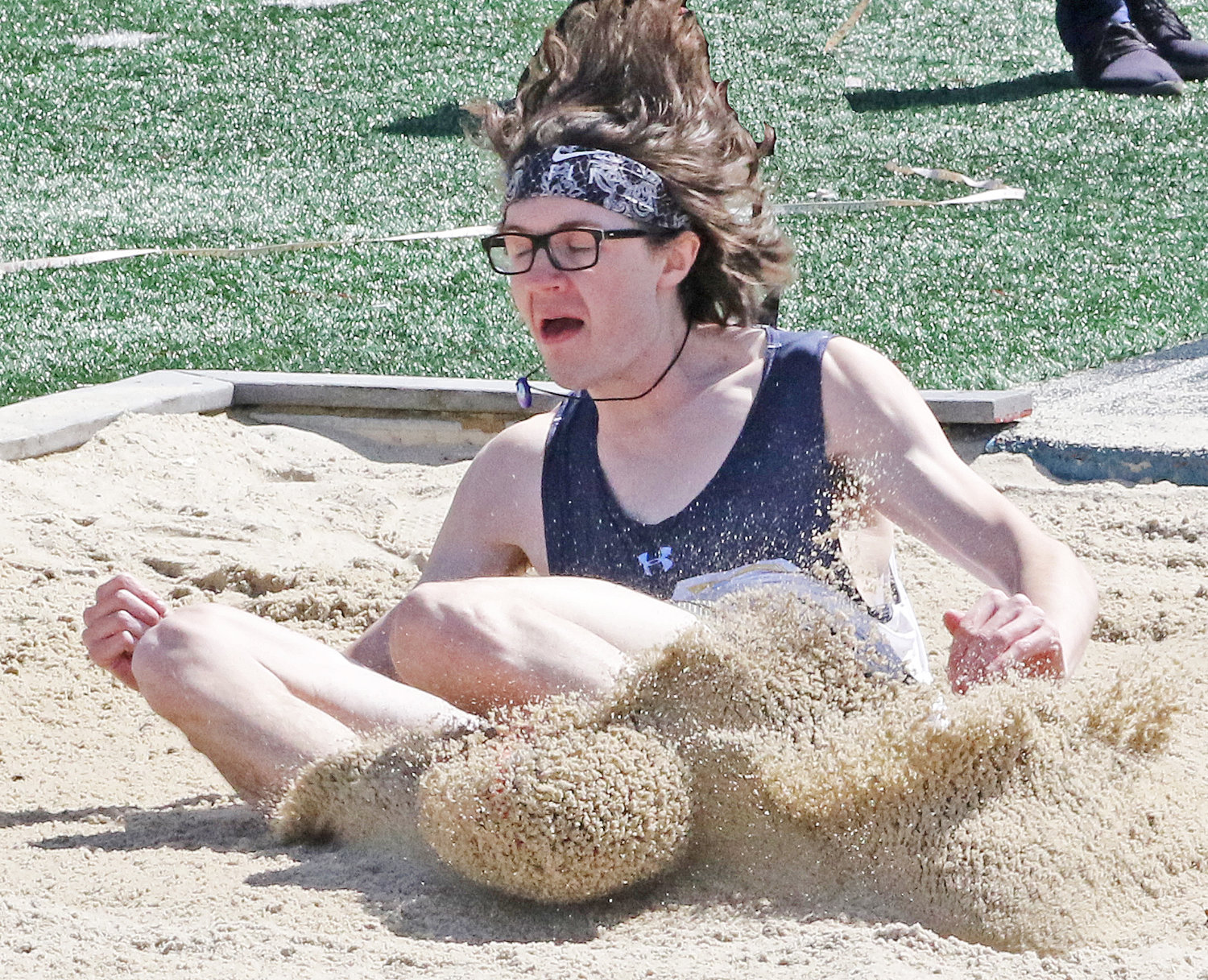 SCH senior Henry Branstadter stirs up the sand in the long jump pit while on the way to winning the event at Saturday's meet. Photo by Tom Utescher
Previous Next
Posted Wednesday, April 6, 2022 10:11 am
by Tom Utescher

The Mount had most of its girls out at the event and the SCH boys were also well represented, while there were relatively few competitors from the other teams on this final weekend of Spring Break.

The individual standout was SCH senior Henry Brandstadter, who won the long jump (21'7") and high jump (6'3"), finished second in the 100 meter dash, and led off the Blue Devils' second-place quartet in the 4 x 100 relay. The runners following him were junior Nick Colavita, senior Wesley Jordan, and junior Andrew Wood.

In the hurdles, PC sophomore Ed Kennedy placed second in the 300 meter event, while SCH freshman Tony Hicks was fifth in the 300's and fourth in the 110 meter hurdles.

The Blue Devils fared well in the throws, getting a one-two finish in the discus from junior Darrion Rascoe (151'1") and freshman Matt McTamney. In the shot put, Rascoe placed second and McTamney was fourth.

A strong showing in the throws was also part of an enormously successful day for Mount St. Joseph. Senior Haley Stefanik won the javelin (105'3") and third place went to freshman Marin Stensrud (who played varsity softball at SCH last spring as an eighth-grader). In addition, senior Sydney Okeke came in second in the discus and third in the shot. Elsewhere in the field events, senior Katie McGovern took fourth place in the triple jump, and junior Faith DeCarlo was second in the high jump and fourth in the pole vault. The Mount was actually missing freshman pole vaulter Veronica Vacca, who had won the Nike Indoor Nationals at a height of 13'6" (the winning height last Saturday at PW was 10'6").

On the track, DeCarlo finished fourth in the 100 meter hurdles, just ahead of senior teammate Ellie Devine. The winner in the 300 hurdles was junior Jasmine Matthews of Springside Chestnut Hill (47.33). The Blue Devils also had junior Grace Hannigan come in third in the long jump.

As far as the footraces went, the Mount Magic had senior Olivia Forti win the longest one, the 3200 meters (12:50.81), while her classmate Kathleen Downs placed second in the shortest one, the 100. The Mounties also got first place in the 400 meters, courtesy of sophomore Lily Bradfield (1:00.49).

Earlier in the meet, Forti had led off a 4 x 800 relay that placed second, with the rest of the foursome featuring sophomores Elizabeth Carey and Mary Kate Sieberlich, and senior Carolyn Arnold.

Another second-place relay was the Mount 4 x 400, where the Magic ran junior Katie Bakley, sophomore Ella Woehlcke, senior Maggie Murphy, and Stensrud. In the 4 x 100, the Mount took fifth with Katie McGovern, Downs, and sophomores Kelsey McGovern and Ella Vogel.

The Magic's Woehlcke, like Stensrud, came over to the Mount from SCH. She had won the Catholic Academies cross country championship in the fall and last Saturday in the 1600 meters she faced another X-C champ. This was Inter-Ac league winner Alli DeLisi, a Penn Charter freshman.

In a meet the previous weekend, Woehlcke felt she had gone out too fast in the early stages, so this time she hung behind DeLisi for two laps before moving ahead. She would go under the five-minute mark, winning in 4:59.86. DeLisi was second and her senior teammate, Julia Dolce, was fourth.

Although just a ninth-grader, DeLisi had finished eighth in the 800 meters at the Indoor National Championships. She excelled outdoors in that event last weekend. Radnor High School senior Lucy Henkel stayed with her most of the way, but DeLisi maintained her lead to win in 2:16.29.