Host Agnes Irwin led 3-1 at halftime in last Friday's Inter-Ac League soccer game, and as the second period wound down it looked like the Owls would coast to victory over Germantown Academy. 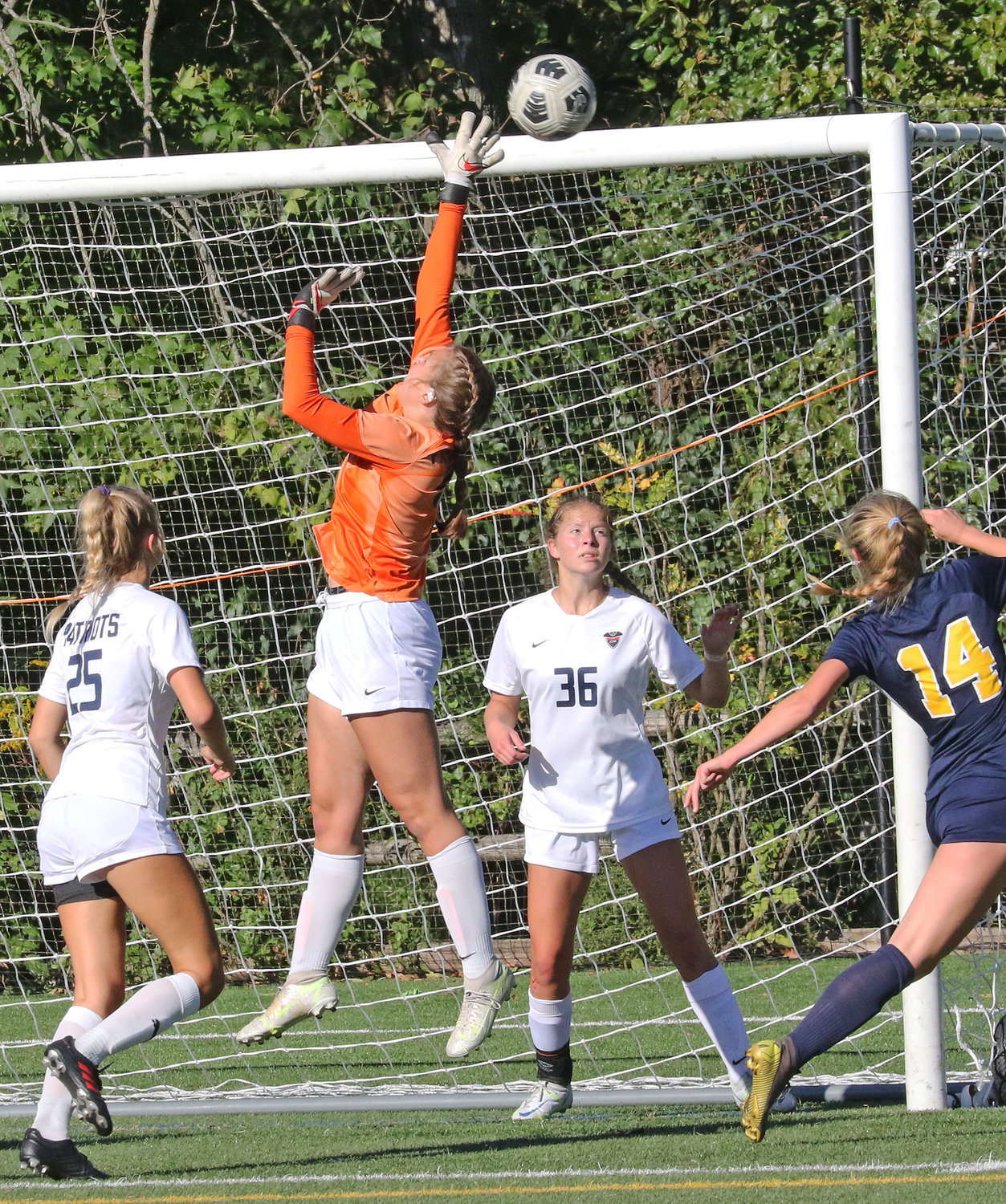 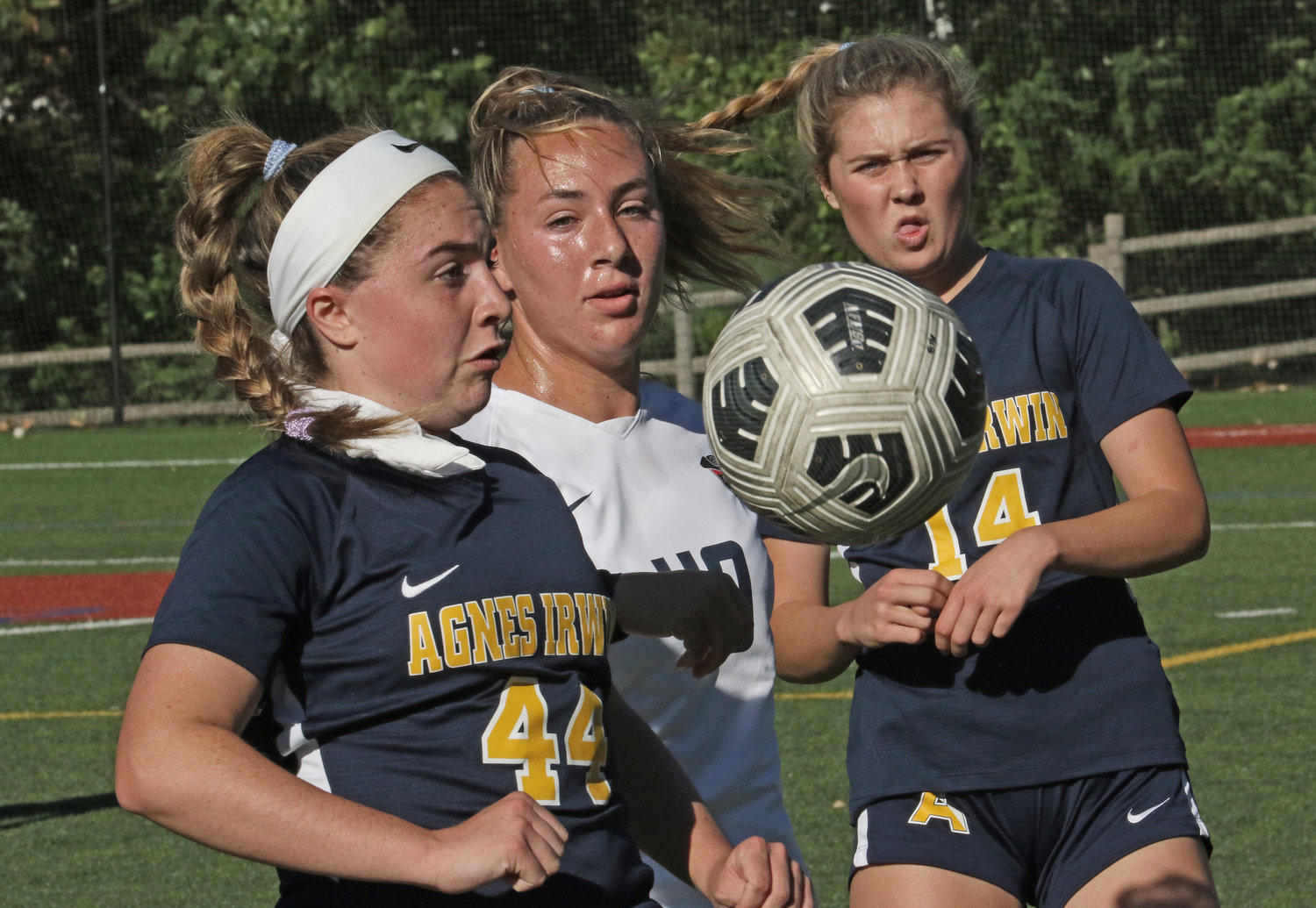 Host Agnes Irwin led 3-1 at halftime in last Friday's Inter-Ac League soccer game, and as the second period wound down it looked like the Owls would coast to victory over Germantown Academy by that same score.

However, things got interesting when Patriots sophomore Kirsten Wetzel found the back of the net with just 58 seconds remaining to make it a one-goal affair.

A tying goal eluded GA in the final seconds, and with the 3-2 final verdict, the Pats slipped to 0-2 in the Inter-Ac while Irwin improved to 1-1. In their league openers earlier in the week, GA had fallen to Episcopal Academy, 4-1, while the Owls bowed to Springside Chestnut Hill, 3-0.

Germantown scored the first goal in Friday's game, as senior Mia Raven struck with just under six minutes elapsed. Irwin would score three times later in the first half.

"Despite the score, I think most of the way we played pretty consistent defense," observed longtime GA head coach Chris Nelson. "We're young, and we're trying to find ways to score goals. We got two today and that's a step in the right direction."

The players who graduated from the 2021 team had accounted for many of GA's connecting passes in the middle of the field.

"We basically lost good players right up the gut," Nelson said. "Even many of the kids who are back from last year are now in new spots on the field, which I know is the nature of high school soccer."

The captains for the 2022 team are Scheid, Weiss and senior Sage Battisto.

After the opening goal by the Patriots on Friday, the Owls tied the match a little over five minutes later, when Lily Fusco sent a shot toward the top left corner. The 1-1 tie stood until Kennedy Kelleher scored to move Irwin ahead with 15 minutes to go in the half, and with 8:25 remaining in the period Fusco struck again for the hosts, netting what would become the game-winner.

With around five minutes left GA's Grosso fired a strong shot a little over the crossbar, and the Owls still led 3-1 at the half.

"I think we were a little flatter in the first half than we've been in other games," Nelson commented. "We were finding ways to get possession of the ball, but then we needed to be more careful when we got it."

Germantown had junior Emily Marks take over in the goal cage for the start of the second half. The visitors were the aggressors early on, then Irwin seized the momentum, generating some corner kicks which GA was able to successfully defend.

GA was not without offensive opportunities later on. Midway through the half a scramble in front of the Owls' nest had the goalie on the ground, and a corner kick resulted. Grosso put the ball in play from the right side, but an AI defender headed the ball well out of the box.

The Owls also failed to cash in on a corner play, and they hit a direct kick too high with just over a dozen minutes left. Back at the far end, a GA free kick angled outside the left post, and when there was a loose ball near the Irwin goal a little later on, Raven was in the vicinity but was crowded away from the ball by some Owl defenders and the keeper scooped it up.

The Patriots continued to attack, and as the final minute approached Goodwin ran onto a ball on the right wing and took it down near the endline. She made an excellent crossing pass, and Wetzel (the niece of GA boys' varsity coach Kurt Wetzel) was in position to punch in the Pats' second goal.

Only 58 seconds remained, and on their last viable charge upfield, the Patriots propelled a through pass too far ahead of the frontrunners and the keeper collected the ball. Still, GA had brought some drama to the final moments of the encounter.

"I don't think we were ever really out of the game today," Nelson said, "so I'll be excited to see them again."