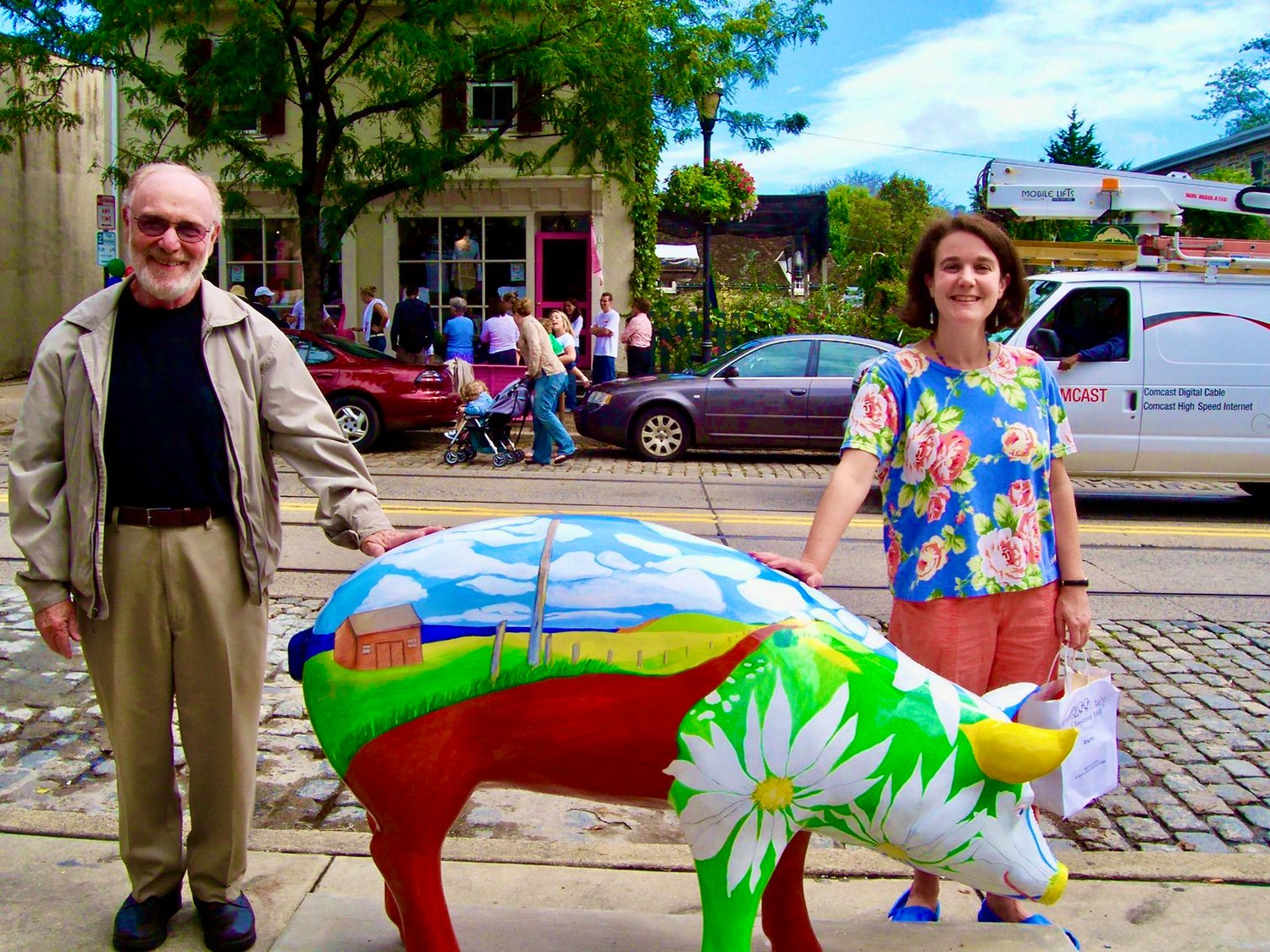 Donald Rackin with his daughter, Rebecca, a Mt. Airy artist who created this pig, Daisy, seen in front of Bredenbeck’s Bakery in September 2006.
Posted Thursday, January 5, 2023 12:00 am
by Len Lear

Donald Rackin, 89, a professor of Victorian literature who taught at Temple University for 33 years, died at home on Nov. 23, the day before Thanksgiving, after a long struggle with Parkinson’s Disease. Rackin lived in Northwest Philadelphia for 58 years — Roxborough for 26 years and Germantown for 32 years.

“Don had a brilliant mind and a ready wit, but those who knew him cherished him most of all for his warm heart and generous spirit,” said his wife of 68 years, Phyllis, a retired English professor at the University of Pennsylvania. “Even in his final illness, he had a kind word and a radiant smile for everyone. He was the kindest, most generous, warmest-hearted person I ever met.”

Rackin was a gifted teacher, well known in the world of academia as a brilliant Lewis Carroll scholar, and he was beloved by his students. One of them, Janet Falon, a widely- published travel writer, wrote in a tribute, “I loved him as a teacher. I loved him as a human being.” Another, Jude Nixon, who is now a world-famous scholar of Victorian literature, wrote, “I owe Don the successes of my personal and professional life.”

Family friends Marcia Ferguson and Tim Corrigan commented, “We loved Don and will miss him greatly … What a joyful man and what a wonderful life! We feel so fortunate to have known him and his fantastic family.”

When asked what she would most like people to know about her father, Rackin's daughter, Rebecca, 63, an artist living in Mt. Airy, told us, “In addition to being a brilliant teacher and scholar, he was so genuine, down to earth and beloved by everyone who met him. He was also an avid reader of the Local.”

Don and Phyllis Rackin have a second daughter, poet Ethel Rackin, 50, a professor at Bucks County Community College, and a grandson, musician Max Hoenig, 27, who lives in South Philadelphia.

Rackin, who was born and raised in Newark, NJ earned a bachelor’s degree from Rutgers University in 1954, a master’s degree from Columbia University in 1955 and a Ph.D from the University of Illinois in 1964. He was an accomplished writer and editor. Most of his poetry and short stories remain unpublished, although his family plans to issue much of it in a posthumous volume to be published in the near future.

He was well known and widely acclaimed, however, as the author of influential articles and books on Victorian literature. In 1967, he won the William Riley Parker Prize, the oldest award given by the Modern Language Association, the principal professional organization in the U.S. and Canada for scholars of language and literature.

The Parker Prize is awarded each year for the best article published in PMLA, the association's primary journal, and widely considered the most prestigious in the study of modern languages and literatures. Don lectured widely, not only in the U.S. but abroad, including talks at Oxford University in the U.K. and in Tel Aviv. He was also featured in a 1994 episode of the TV series “Great Books” devoted to the work of Lewis Carroll.

At Temple University, Don was editor of the Faculty Herald. “He was one of the best editors we ever had,” a colleague, Bob Salomon of Germantown, recalled, “and we had very good editors.” He also edited Academe, the national journal of the American Association of University Professors.

After retirement, Rackin continued his editorial work as a volunteer for the Greater Philadelphia Coalition Against Hunger, where he prepared grant proposals and pitched in to help with other projects, and at Coming of Age, a civic engagement program for older adults.

Don was also a life-long activist. According to Phyllis, “He was an early opponent of nuclear proliferation and the Vietnam and Iraq Wars and an active supporter of civil rights and the Faculty Union at Temple, where he chaired the Grievance Committee.

As one of his friends wrote, 'He lived his beliefs.' He was a feminist even before the word became familiar. He fought hard for women’s rights, and in his personal life, it never entered his mind that he was not responsible for an equal share of the housework and childcare. When I suffered from sex discrimination at my place of employment, it was Don who encouraged me to fight back, and he actively supported the precedent- setting lawsuit I finally brought (Rackin vs. University of Pennsylvania).”

Don also knew how to have fun. His family told us that at his high school in Newark, he was known as the best jitterbug dancer in his class, and later in life he became a skilled sailor, cook and carpenter. Don single-handedly built part of a summer cottage on Prince Edward Island (in the Gulf of St. Lawrence, Canada).

According to his family, Don also cherished his Jewish heritage, taking a course after retirement in the Yiddish language, delighting in Jewish jokes, Jewish food, Klezmer music and books and movies with Jewish themes.

A memorial service will be planned for a later date. Len Lear can be reached at lenlear@chestnuthilllocal.com