Wendy Feldman, owner of Spa Elysium on Bethlehem Pike in Chestnut Hill, was shot and killed last night in the parking lot behind her business in what police are reporting as a domestic murder suicide. 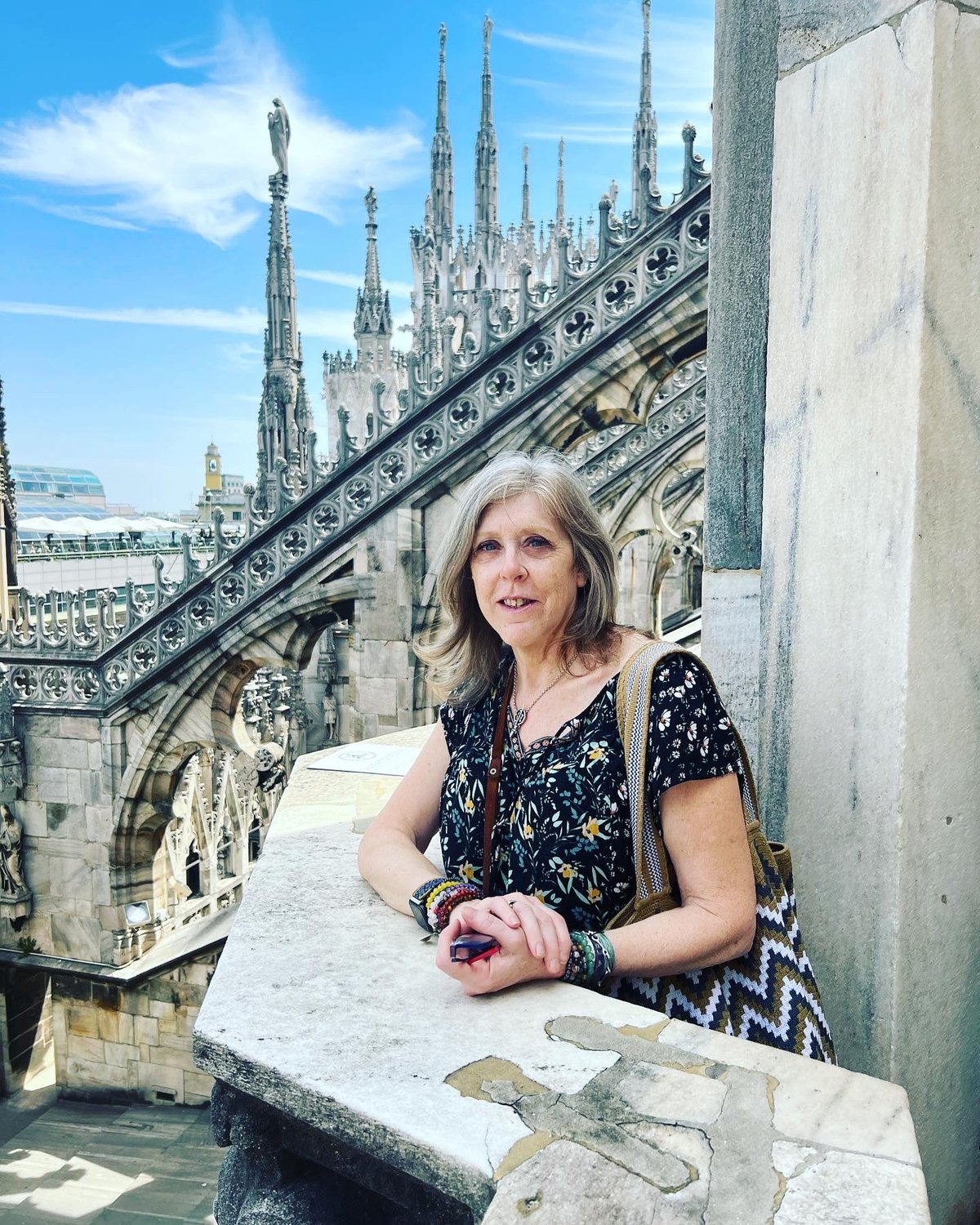 This photo of Wendy Feldman was taken by her daughter, Brynne, in Milan, Italy, last summer.
Posted Thursday, December 8, 2022 10:25 am
by Carla Robinson

Funeral services for Wendy Feldman, a beloved Chestnut Hill business owner who was shot and killed on Wednesday Dec. 7  in a domestic murder-suicide, are scheduled for Wednesday Dec. 14, at St. Paul’s Episcopal Church at 11 a.m. on Bethlehem Pike. Visition begins at 9:30 a.m. and a reception will follow in the parish hall.

According to police, Feldman’s husband Frank Hayden shot her shortly after 9 p.m. in the parking lot behind her business, Spa Elysium at 55 Bethlehem Pike, in what police are reporting as a domestic murder-suicide. Hayden then shot himself.

According to friends and associates of Feldman, she had been in the process of divorcing Hayden.

According to the police report, officers were called to the site Wednesday night with reports of a man with a gun. They found Feldman, 59, and Hayden, 64, both with gunshot wounds to the head. They also found their two cars, both of which were registered to the same address in Flourtown.

Feldman was declared dead at the scene at 9:26 p.m. Police transported Hayden to Chestnut Hill Hospital, where he was listed in critical condition. He was then transferred to Temple University Hospital and declared dead at 10:56 p.m.

The shots were fired near the intersection of Bethlehem Pike and Germantown Avenue, and could be heard along the Germantown Avenue central business district, which was just wrapping up an evening of extended shopping hours known as Stag & Doe Night.

Feldman, who started out in the business working as a hairdresser for stylist Michael Hawkins, was active in the community and served as a member of the board of directors of the Chestnut Hill Business Association.

Hawkins, who owned Chestnut Hair, a popular salon that he operated at 8440 Germantown Avenue for many years, first hired Feldman in 1991.

“She came to me right out of hairdressing school. She was a very good hairdresser, and very quickly, she moved up to become my floor manager,” he said. “She was with me until about 1997 I think.”

“Wendy was always very good at keeping up with what’s current in the business, whether its products, styles, even fashion,” Hawkins said. “That’s what made her such a success. That and what a hard worker she was.”

After a brief stint in California, Feldman returned to the Philadelphia area and opened up her own business, Spa Elysium. The salon was originally located on Stenton Avenue in Flourtown, Hawkins said, but Feldman moved it to Chestnut Hill when the building on Bethlehem Pike came up for sale.

He and all their many mutual friends in the business are feeling stunned by the news, Hawkins said.

“Chestnut Hill will really miss her. She made a lot of good friends here, and knew a lot of people,” he said.

Mike Pieciuk, who owns Primo Hoagies right next door to the spa and rented his space from Feldman, said she was a caring and motherly figure to many of his employees.

“If any of them hurt themselves, say they cut their finger or something, they’d just head over to Wendy and she’d fix them right up,” he said. “She was always ready to help them out with whatever they needed.”

As for himself, he said, he feels a profound emptiness.

“We used to talk or text pretty much every day,” he said. “Now I’ll just be going about my business and feel like I want to reach for the phone to text her about something, and then remember, and have to stop myself.”

Anne McNally, co-owner of McNally’s Tavern, said she grew to have enormous respect for Feldman as she watched her develop her business over the years.

“Wendy really was the American Dream,” McNally said. “She was a really hard worker, and smart. There are not a lot of women in this community who were able to do what she did. She started out working for Mike, and I don't know how she did it but she worked her way up until she was able to open her own spa and then buy that building.”

During the years that Chestnut Hill ran a Harry Potter festival, McNally said, Feldman was one of the hardest workers.

“She really went all out. She rented an empty storefront and really slayed it for Harry Potter,” McNally said.  “She bought tons of stuff, and she’d be there herself all hours, working the sales.”

Starr Osborne, owner of Tailored Home and a good friend of Feldman’s, said she was “heartbroken.”

"She was fiercely loyal to her daughter Brynne, her employees and clients, and built a wonderfully full life around the people she cared about,” Osborne said. “I will miss her.”

According to Feldman’s friends and family, she had been sponsoring two little girls in Guatemala for the past two years. Feldman began that sponsorship after visiting her daughter, Brynne, who lives in that country. They are now asking that donations in lieu of flowers be made to Planned Parenthood or to Sueños, a Mt. Airy-based organization that manages such sponsorships.

Posting on the spa’s facebook page, Feldman’s friends and family write that “traveling to Guatemala to visit Brynne over the years ignited her passion to help those less fortunate…if any of you are in a position to, or are interested in learning more about, sponsoring one or both of these girls please reach out privately as we hope to continue to honor Wendy’s legacy.”

They also thank everyone in the community who has reached out to offer love and support.

“We are heartbroken to confirm the tragic and senseless passing of our owner, Wendy Feldman,” they write. “With the collective grief that comes from losing a member of the Spa Elysium Chestnut Hill Family after 31 years, we are comforted by the outpouring of love, support, and kind words being shared.

The spa will continue to operate, and remains open for business.