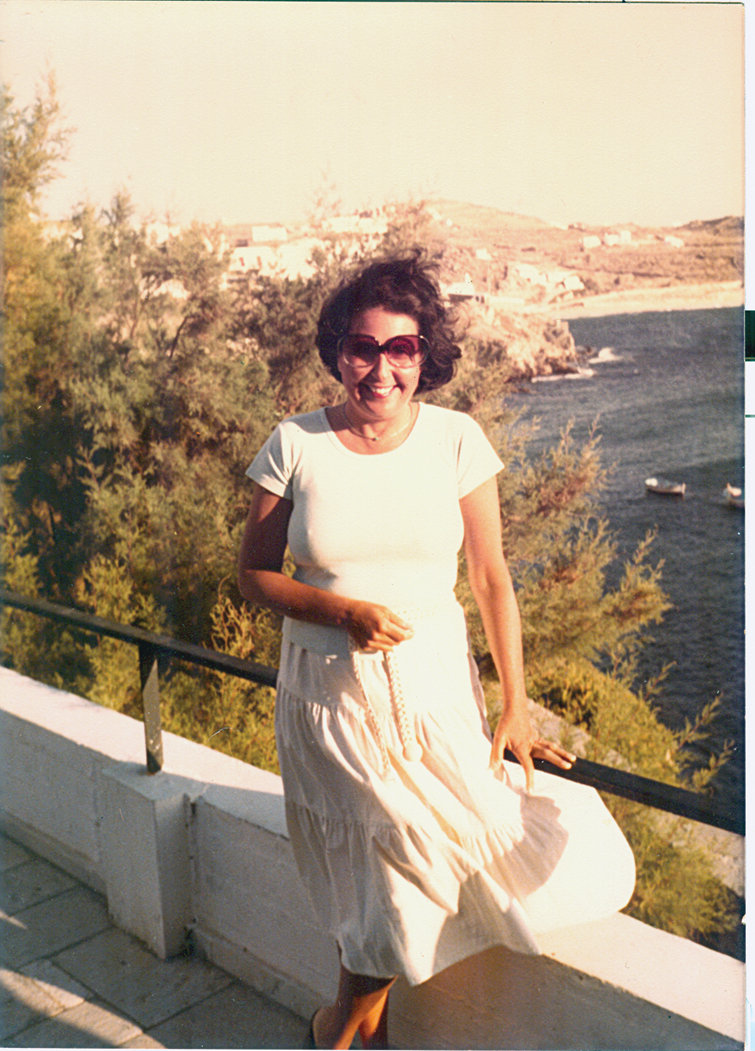 Betty Sherman on her honeymoon in Mykonos, Greece, after her 1979 marriage to candy manufacturer Arthur Sherman.
Posted Tuesday, March 29, 2022 2:23 pm
by Len Lear

Most of us have probably had one or two very special teachers in the course of our formal education, people who inspired us, who we could never forget and possibly even stayed in touch with long after graduation.

Betty Sherman, a former art teacher at Springside School who died March 15 at age 89, was just such a teacher.

In fact, a group of her former Springside students who attended the school in the 1980s, - Jenny James McHugh, Tina Seving McDonald, Lisa Lloyd, Leslie Clements Haddow and Sarah McMenamin came together to prepare a statement about just how special she was.

“Betty was ahead of the curve in terms of her teaching methodologies. When assigning a project, she always had us work in teams,” the statement said. “I (Jenny) remember an assignment to design a storefront with my classmate, Leslie Clements Haddow, who is now the owner of Chestnut Hill Jewelry! Collaboration is one of the key tenets of experiential learning and the heart of the curriculum at [Springside Chestnut Hill] today.

“Because of her family connection to Zitner Chocolates, Betty arranged for student groups such as the Service Council to sell chocolate Easter eggs to benefit various organizations. Unfortunately, a few of us ate our eggs and then had to come up with the cash to pay for the proceeds. Betty had a perennially sunny disposition, so we didn’t know that she was pushing us to learn things like perspective. We just thought we were having fun in art class.”

Sherman's son, David Cantor of Glenside, who founded the nonprofit organization Responsible Policies for Animals, said few of the many people who knew and loved his mother knew how resilient she really was, or how much she had to overcome during her life.

She also experienced a lot of family trauma. Mom, an only child, lived with her mother, her father, and her mother's mother, Sophie Suskind, who had brought Mom's mother, age 5,  to the U.S. from Ukraine early in the  20th century, leaving behind a sister and other relatives.  They kept in contact by mail with Sophie’s sister until 1941, when Sherman was nine years old - and all communication stopped.

“[Sophie] and her family members were presumed victims of the Nazi Holocaust, which was confirmed years later,” Cantor said. And then Sherman’s uncle, her father’s only sibling, committed suicide, something Cantor said “permanently demoralized mom’s father.

“Since my mother’s death, her kindness, generosity and sunny personality have been noted by my friends, family friends, neighbors and family members,” Cantor said. “Few people realize how brave Mom had to be and what a resilient temperament she had to have to establish an exuberant personality at a young age and to maintain it through a long life.”

Sherman's other son, Paul, an attorney now living in Seattle, said,“Betty was a devoted and loving grandmother … She took an avid interest in all aspects of her granddaughters' lives; at each of their weddings, their friends marveled at how much Betty already knew about them from the years of conversations.”

Mary Silverstein, 90, Sherman's close friend for 74 years, told us, “Toward the end of our junior year at Girls’ High, a sort of gang of seven had formed, but now only three of us are still around.

“As the years passed, we all kept in touch, attending one another’s weddings, welcoming lots of babies, and there was a class reunion almost every year until the turn of the century. Betty and I palled around quite a bit after our divorces … Those were very good days!”

Sherman was born Betty Ruth Katz in Philadelphia on Aug. 28, 1932. Her parents, Martha and Saul Katz, were career Philadelphia public-school teachers. Graduating first in her class from the Philadelphia High School for Girls in 1950, Sherman received a scholarship to the Philadelphia College of Art. She left the college after one term and married former next-door neighbor and Harvard Law School graduate, Gilbert M. Cantor.

Sherman took painting classes, studied art philosophy at the Barnes Foundation and taught art at Miquon Elementary School in Conshohocken from 1966 to 1969 while raising her two sons. She enrolled in the Tyler School of Art in the early 1970s, where she received her bachelor’s degree in fine arts in 1974. She served on the Board of Trustees of Chestnut Hill Academy (now Springside Chestnut Hill Academy), which her sons attended from 1971 to 1974.

After her 25-year marriage to Gil Cantor ended, Sherman married candy manufacturer Arthur Sherman, of Zitner's Chocolates. The couple wed in 1979. From 1979 to 1984, Sherman worked as an art teacher at Springside School (also now SCH), retiring as Art Department chair.

Sherman's own artwork was quite impressive, according to Andrew Domanski, owner of The Little Gallery at 8622 Germantown Ave. Domanski presented a show of Sherman’s work in July of 2019.

“Her work was … beautiful, light-filled, fresh, original,” Domanski said last week. “A few of her silkscreens, as well as some watercolors and oils, remain available here.”

The Shermans were married for 39 years until Arthur's death at 93 in 2018. They both supported many community and nonprofit organizations. Sherman served on the board of Young Playwrights’ Theater and volunteered at a hospice. Living most of her adult life in Chestnut Hill, Sherman spent her final years at Cathedral Village in Andorra.

In addition to her sons David and Paul Cantor, Sherman is survived by daughters-in-law Elizabeth Holt and Julie Cantor, granddaughters Sarah Capraro and Alison Cantor, and great-grandson Adrian Francis Capraro. Sherman did not wish to have a service or memorial. Memories to be shared with her family can be sent to dcantor@rpa1.org.