Spice Rack manager Shannon Lebraun is one of many local African Americans who make Northwest Philadelphia, from Chestnut Hill to Mt. Airy to Germantown, buzz to life with foodie possibilities. 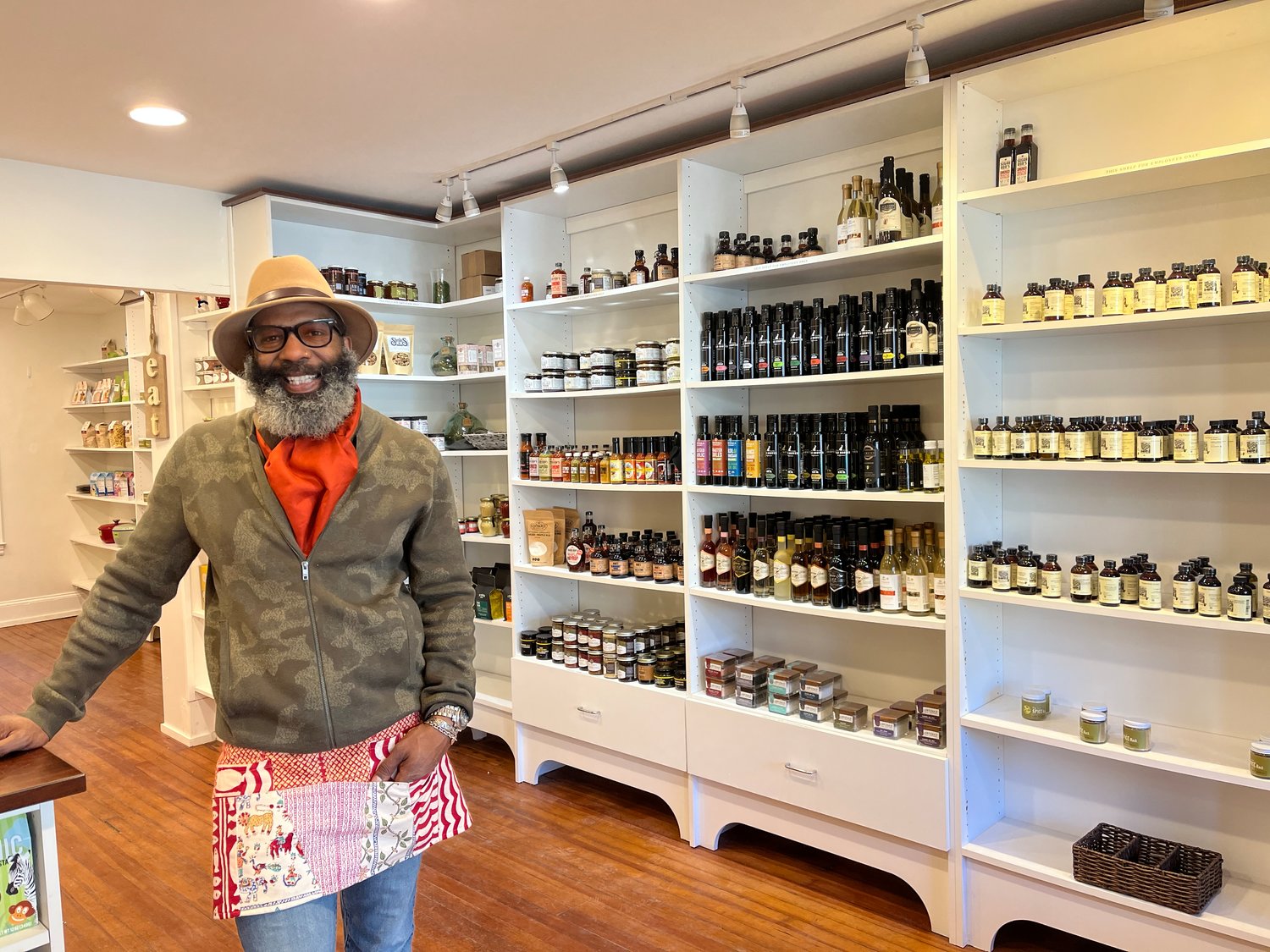 Years after his family opened their business on Germantown Avenue, Spice Rack manager Shannon Lebraun discovered that a great, great, great grandfather, a formerly enslaved man, had started his own spice trading company in the early 19th century. Photo by Carla Robinson
Posted Wednesday, February 16, 2022 12:00 am
by April Lisante

It was quite by accident that Chestnut Hill’s The Spice Rack manager Shannon Lebraun discovered he was exactly where fate had directed him to be.

Sometime during the midst of the pandemic, the longtime spice store manager decided to do some family tree research, and stumbled upon a great, great, great grandfather, a formerly enslaved man who started his own spice trading company in the early 19th century, peddling spices between Liberia, Africa and New York and Philadelphia.

“We had no idea. And here we are selling spices in Philadelphia,” Lebraun said. “We were destined to be in this business.”

Lebraun, who has operated The Spice Rack on Germantown Ave. with family for nearly five years, says he feels at home in Chestnut Hill. After looking at several locations in the area, he and his family felt Chestnut Hill had a “village” feel and the need for such a foodie niche, where he could sell more than 400 spices and rubs, 30 vinegars, 20 different olive oils and 70 different extracts.

“It really is a village here,” Lebraun said. “Everyone knows everyone, and everyone is like family.”

Lebraun is one of many local African Americans who make Northwest Philadelphia, from Chestnut Hill to Mt. Airy to Germantown, buzz to life with foodie possibilities. Sure, there’s Center City’s restaurant scene, but we here are lucky enough to have some of the best breakfast spots, cafes and restaurants owned and operated by black entrepreneurs. This month, as we celebrate Black History Month, I wanted to recognize some of the places that make the food scene here so vibrant and unique.

While Lebraun and his family have been operating for half a decade on Germantown Ave., first on the east side of the street, now on the west side beside Weaver’s Way Next Door, chef Robert Pollard will be celebrating a fourth anniversary this May at the Breakfast Boutique just up the street near McNally’s.

Pollard, who was a high-volume caterer with the Pennsylvania Convention Center and the Franklin Institute, thankfully decided to bring his expertise right to us in Chestnut Hill. He now specializes in French-influenced breakfast fare, making some killer double chocolate pancakes (I finished the whole stack) and some amazing shrimp and grits. After opening his Germantown Ave. café in 2018, he went on to open a second location, the Mount Airy Breakfast Boutique, in February 2019.

Mt. Airy is home to so many African American restaurant gems. One of the most bustling best kept secrets is Gilbin’s Bakery and Specialty Sandwich Shop. For nearly five years, the shop on Stenton Ave. has served up everything from baked goods to cheesesteaks, but customers always seem to come back for its Po’ Boy sandwiches, served on toasted garlic rolls.

A few months ago, Gilbin’s expanded its operation and opened the Gilbin’s Smokehouse, which now churns out soul food with a smokehouse twist. They also have Gilbin’s Creations, which lets you craft your own salads, pasta bowls and smoothies. In all, the company takes up three addresses side by side by side on Stenton Ave.

“It’s some of the best soul food in the city,” said bakery manager Blair Blake, adding one of the owners, Crystal Brown, wanted the place to be a one-stop shop that offered something for everyone. “We are really known for our Po’ Boys.”

At Mt. Airy’s Brotherly Grub Café, “a café with everyday soul,” Tanesha Trippett started out as a caterer in Philly before opening a Brotherly Grub food truck back in 2017 and finally landing a café spot in Mt. Airy on Germantown Ave. in November 2019. By 2020, the Brotherly Grub Brunch Café was nominated best black-owned brunch place in Philly. Some of the “Favorite Brunch Jawns” include Belgian waffles, tofu scrambles and breakfast sandwiches.

And it wouldn’t be a food column tribute to African American entrepreneurs without talking about All the Way Live Café, a mother-daughter collaboration that brings vegan and live, or natural and raw foods, to Germantown. Owners Beverly Medley and daughter Nyeisha Cabiness have run a location in Germantown since 2010, though they operated a second resto for nearly two years in Chestnut Hill.

After spending decades dedicated to the vegan way of life and even teaching classes about it, Medley cooked up a storm and spurred a grassroots following for her food in her neighborhood, which finally convinced her to take the plunge and open a brick-and-mortar location. She hasn’t looked back since.

“We love the diversity,” Medley said. “We’ve met so many wonderful people.  We are so passionate about the type of food [we serve] and we see how eating habits can transform your life. I see the power of it, and I love sharing it with the community.”