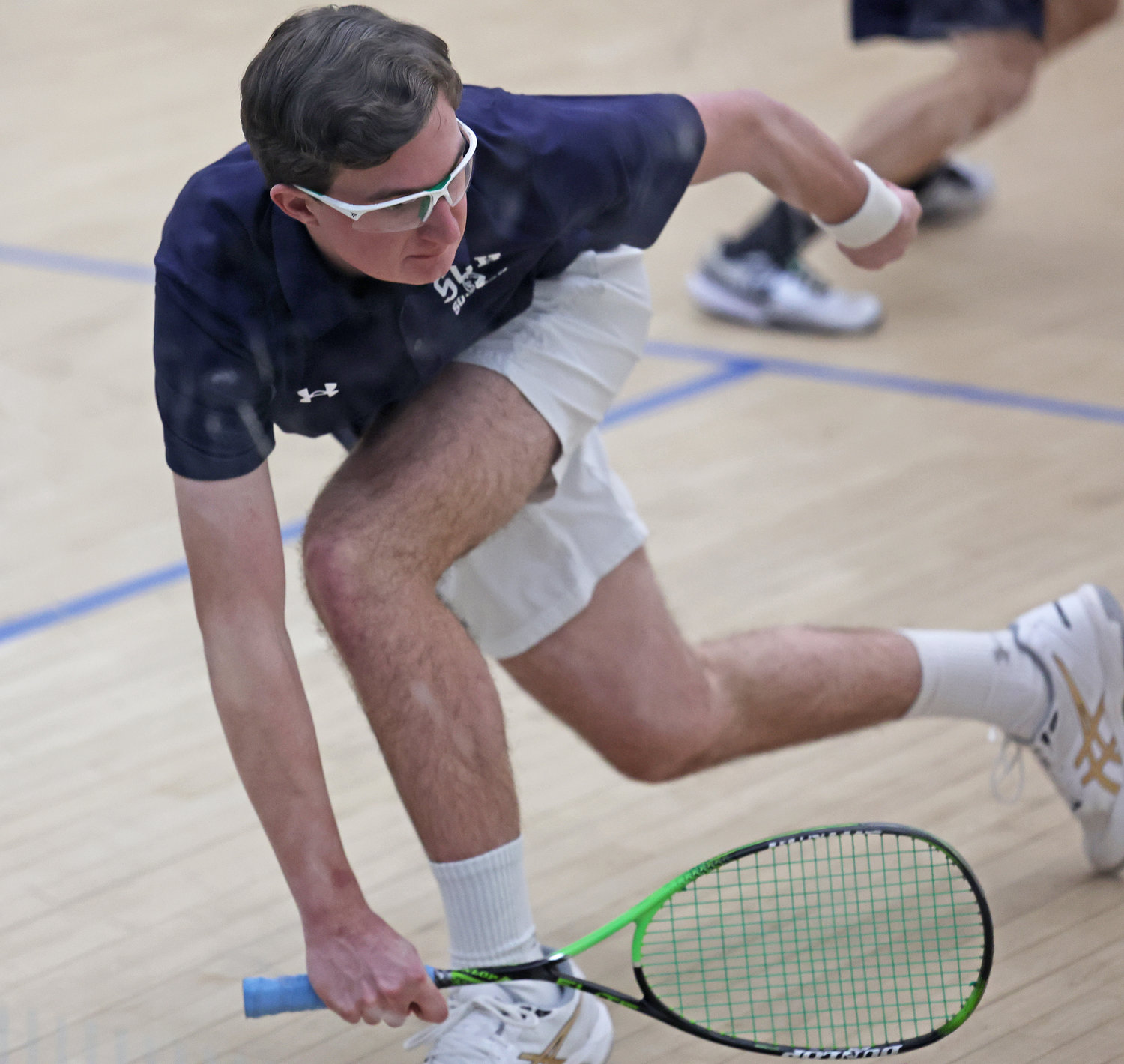 SCH senior Jack Gaghan goes back along the wall for a ball during the number two match.
Photo by Tom Utescher
Posted Wednesday, January 18, 2023 12:00 am
by Tom Utescher

Although a nine-match format is usually employed within the Inter-Ac League, Malvern only brought seven players to SCH last week. This left Blue Devils senior Will Kelly (number eight) and junior Evan Champagne (number nine) idle for the afternoon.

In their three previous outings, the Blue Devils weren't able to capture any individual matches against longtime power Episcopal Academy, but they did have a few successful bouts in their encounters with Penn Charter and Hill School. Overall, these were both 2-7 losses, but junior Cameron Lyon won his matches against both schools, while Champagne got a win against PC and a third junior, Jack Cook, won his match against Hill.

Last Tuesday, neither Lyon nor Champagne played against Malvern, but Cook was in action, performing in the number four spot for SCH. He defeated another 11th-grader, Malvern's Cade Heppelmann, 11-5, 11-1, 11-3.

Cook is one of three players named Jack in the Blue Devils' line-up. In the second flight, Jack Gaghan won 11-4, 11-3, 11-5 over fellow senior Sebastian Stewart of the Friars, and at number five, junior Jack Larkin took the measure of visiting senior Michael McDevitt, 11-6, 11-4, 11-2.

Malvern claimed its lone individual victory in the number one match, a five-gamer. Blue Devils sophomore Patrick Gaghan rolled through the first game, 11-2, but Malvern junior Hayden Fisher regrouped to take the next two, 11-8, 11-6.

Gaghan extended the bout by winning the fourth round, 11-9, to force a fifth game. After the players were tied early on at 3-3, Fisher won the next five points for an 8-3 advantage. Gaghan never recovered from this, although he fought on for a few more minutes before Fisher wrapped up the game at 11-7.