It was a post unlike any I had ever seen before. 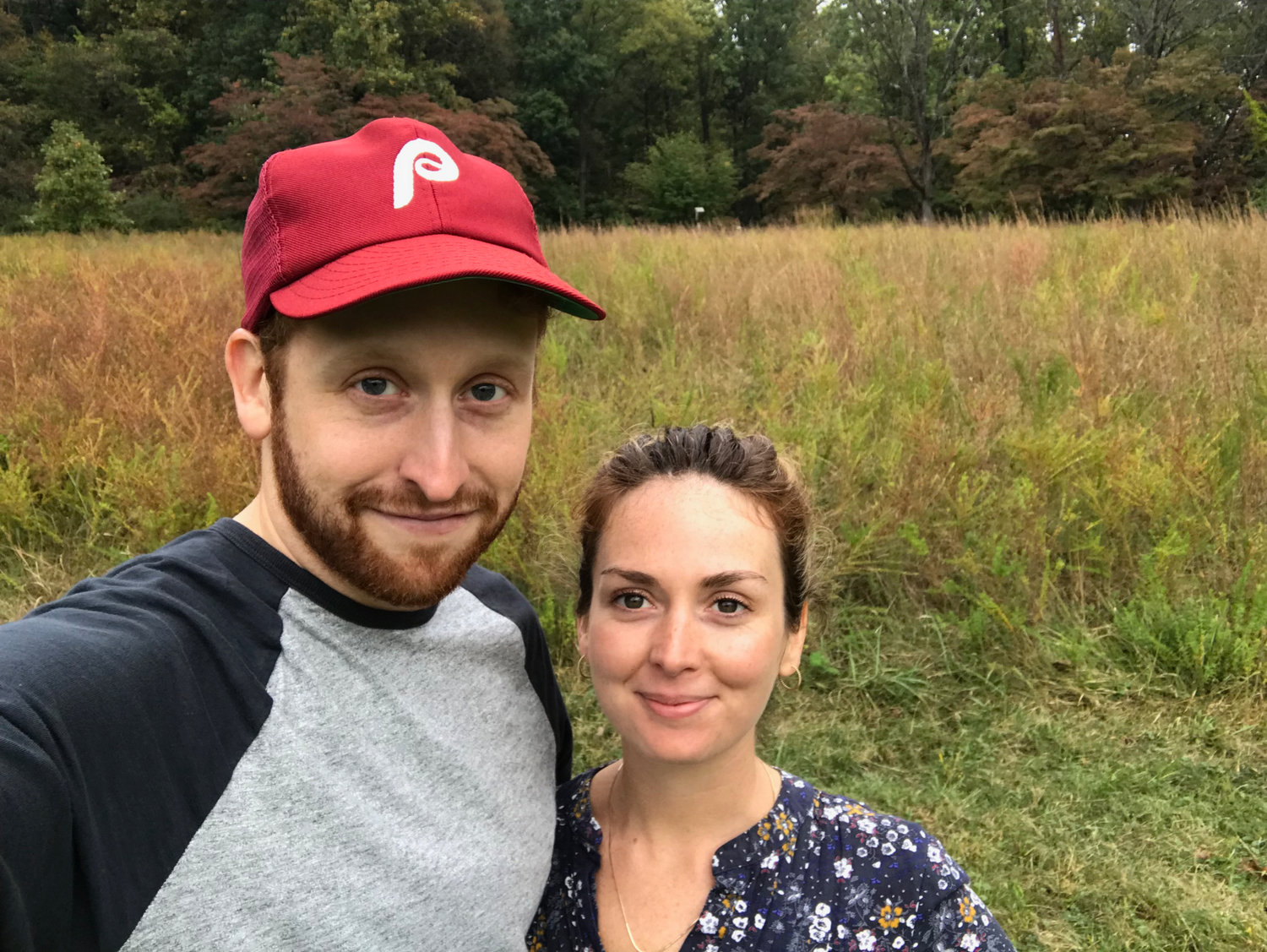 Sean and Jessica met on a dating website in July 2017, and this photo was taken a few months later. In July 2019, Jessica was diagnosed with breast cancer. 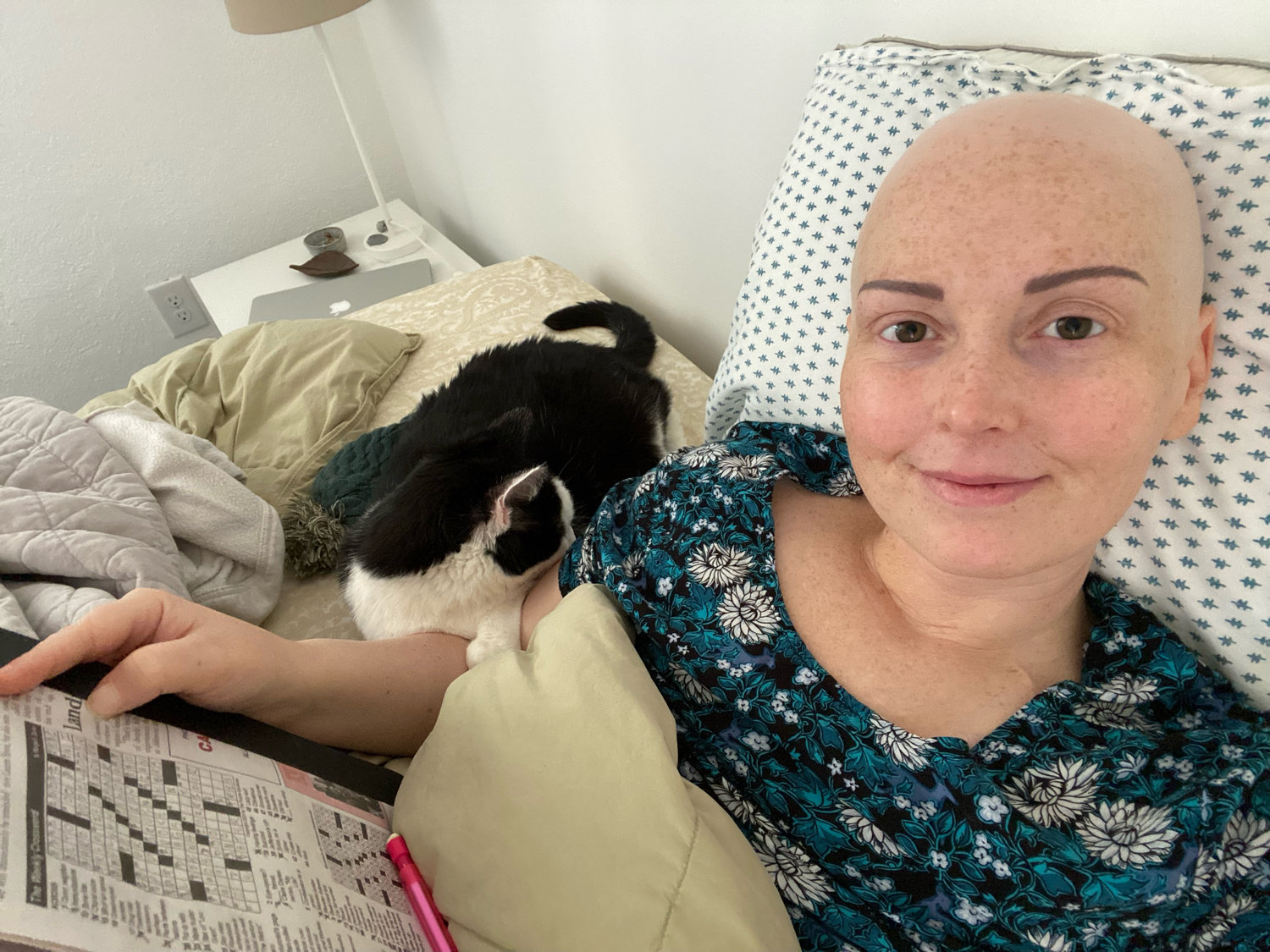 This recent photo was taken in the Chestnut Hill carriage house where Sean and Jessica live. Beside Jessica is their late cat, Abraham, who was euthanized in September. (They have since gotten two kittens.)
Previous Next
Posted Thursday, January 19, 2023 12:00 am
by Len Lear

Mt. Airy Nextdoor is a website where you will find people asking for recommendations for plumbers, general contractors, restaurants, auto mechanics, etc., in or near Northwest Philadelphia, or people warning you to stay away from certain home improvement businesses, claiming they paid money but the work was never done. In other words, it is a sort of community blackboard.

However, I recently saw a post unlike any I had ever seen before. It was from Sean Reisman, who grew up in Chestnut Hill, went to Jenks Elementary School, Central High School (262 Class) and attended Temple and Penn State Universities and Chestnut Hill College. His father is Brian Reisman, owner of Hideaway Music in Chestnut Hill.

The post begins as follows: “In July of 2019, at only 32, my fiancée Jessica (Moorhead) was diagnosed with 'triple negative' breast cancer, which is a rare and aggressive subtype of the disease and has limited treatment options. After countless rounds of chemo, 59 sessions of radiation and four surgeries, she’s STILL fighting this disease, and there’s currently no end in sight. Cancer can be relentless. And so extremely cruel.

“Three years and counting is a long time to battle cancer. The lives that we once knew are all but gone, and the image of the future that we envisioned is rapidly fading. We planned to work hard at our jobs, buy a modest house with a little yard for a dog and maybe have a couple kids. Were those unrealistic goals? We didn’t think so...”

Sean told us in an interview last week that Jessica, a Delaware County native with a degree in communications from Temple University, had looked for a job for many months. She was thrilled when she finally was hired by the University of Pennsylvania in March, 2019, in the financial department keeping track of grants.

“She had good pay and benefits,” said Sean, who still lives in Chestnut Hill with Jessica, “but the breast cancer diagnosis came soon afterwards. She kept working until December of 2019 but then had to leave. She did go back to work six months later, but then the cancer came back. And the pandemic made things even worse. She could not do the job remotely, so she was forced to leave her job. And I started working only part-time so I could take care of her full-time. Then the housing market exploded. It was a perfect storm!”

Sean and Jessica met on the Tinder website in July of 2017 and were engaged in March of 2019. Four months later she was diagnosed with breast cancer. She currently undergoes hyperbaric oxygen treatments daily at Penn Presbyterian Medical Center which, according to the Mayo Clinic website, “involve breathing pure oxygen in a pressurized environment … When your blood carries this extra oxygen throughout your body, this helps fight bacteria and stimulate the release of ... stem cells, which promote healing.”

“It is a real grind every weekday for eight weeks straight,” said Reisman. “I take her four of the days, and her mom takes her the other day … Years have been taken from us when we would have made a living, bought a house, had kids and a dog. Not being able to work as young people is very hard, but I don't want this to sound like we are feeling sorry for ourselves.

“We have support and friends and are better off than a lot of people. Jess has said so many times she wished this could have happened later in life if it was going to happen, when we would have had more life under our belt. Despite this, please note that we’re acutely aware of and immensely grateful for the things and privileges that we DO have.”

Reisman received about 50 responses to the Mt. Airy Nextdoor website post, and he replied to everyone. “Most were just well wishes, which we certainly appreciate,” he said. “We know now that there are strangers out there who truly want to help. One woman in Chestnut Hill whose husband had died of cancer offered to sell us her house for what she paid 16 years ago. It was a very generous offer, but that price was $500,000.”

For more information, email seanandjessicareisman@gmail.com. Len Lear can be reached at lenlear@chestnuthilllocal.com