With 28 mainstage shows, nightly cabarets, pop-up events, workshops, artist talkbacks and more, Cannonball will offer something for every age. 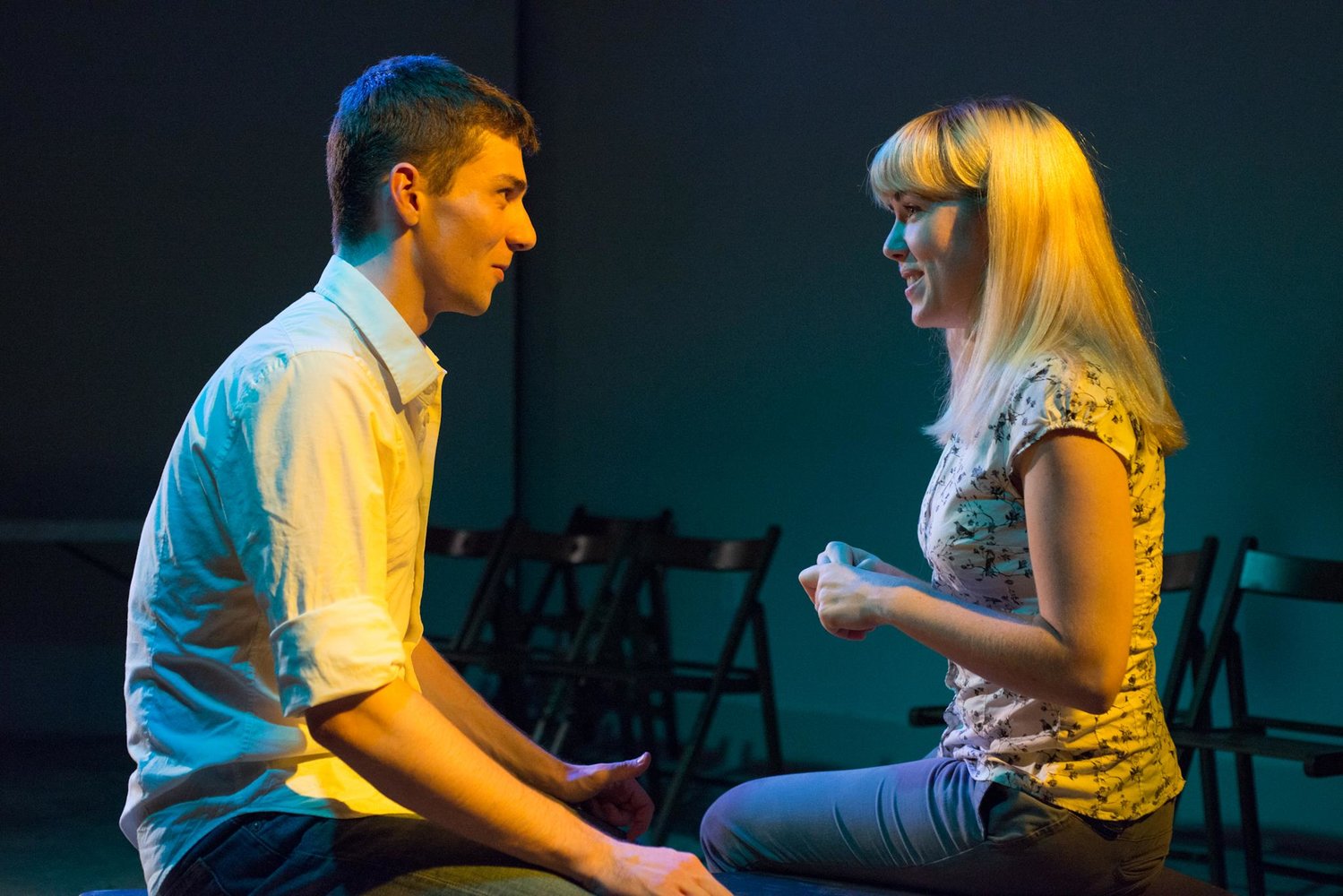 Mt. Airy's Nick Jonczak is seen here with actress Ava Knox in an Impossible Theater Company production of “[missed connections]” at The Fridge in Washington, D.C. , 2012.
Posted Wednesday, September 8, 2021 9:00 am
by Len Lear

Nick Jonczak, 33, of Mt. Airy, is a multi-talented freelance producer, director, creator and teacher of performance arts. He is one of the many artistic local individuals who will be performing in or producing more than 100 shows, workshops and events spanning circus, dance, theater, film and more in the inaugural season of Cannonball, an independently run satellite festival of the Philadelphia Fringe Festival. This wide-ranging event will run Sept. 9 to Oct. 2 at the MAAS Building, 1320 N. 5th St., both indoors and outdoors.

With 28 mainstage shows, nightly cabarets, pop-up events, workshops, artist talkbacks and more, Cannonball will offer something for every age. There will also be a festival bar with food hosted by Fergus Carey of Fergie’s Pub.

Cannonball will provide festival-goers with a one-stop venue for a Fringe experience. In 2020, inspired by recent experiences at the Edinburgh Fringe, Almanac Dance Circus Theatre and MAAS decided to team up to create an independent hub of activity during the Philadelphia Fringe Festival. Then the pandemic happened, and the plan was scrapped until this year.

Jonczak will be producing a three-week, short play series called “Visions” with nine other playwrights for Cannonball. Each week a different group of writers present new performance pieces inspired by outer space, technology, religion, etc. In the first week of Visions, Jonczak will present a play he wrote called “Pirate/Queen” that he calls "a verse play in queer." “Visions” will be performed Sept. 12 to 15, Sept. 19 to 22 and Sept. 26 to 29. Also, on Monday, Sept. 13, 5:30 p.m., Nick will be showing an excerpt, “About Ready,” from a full-length play he's writing, “Drive In Double.”

Raised in Levittown, Jonczak graduated from Truman High School there and American University in 2010. He picked Mt. Airy to live in because “my partner, Ben Grinberg, and I were looking for more green space. Before Mt. Airy we lived in what I jokingly call 'Port Fishington,' the sort of triangle between Port Richmond, Fishtown and Kensington.

“During the lockdown days of the pandemic, we longed for more outdoor space. For several years Ben taught at the Circadium School of Contemporary Circus in Germantown. His company, Almanac Dance Circus Theatre, which runs the Cannonball Festival, has rehearsed and performed in this area as well, so we were familiar with Mt. Airy. We saw a home on Zillow and absolutely fell in love with it!”
Most theater artists work with different companies within the course of a year, and Jonczak's career has been the same. In college he studied as an actor and director, but he also worked at American University's Greenberg Theatre as a production assistant, doing everything from carpentry, lighting, welding, sound, box office and turning pages for an award-winning concert pianist to subbing for a children's production of “The Nutcracker” when the nutcracker himself was stuck in traffic on the way to the theater!

“The show must go on,” said Nick. “Theater artists are the most resilient, voracious and innovative folks I know, and most of us wear multiple hats within the industry. Subbing for 'The Nutcracker' taught me that I had to be ready for any eventuality, which has positioned me to work for many companies in different capacities.”


After finishing his degree in Theater Activism at American University, Nick founded his own performing group called Impossible Theatre Company. It produced three shows between 2011 and 2013, two of which he performed in.

He then moved back to Philly for graduate school at the Pig Iron School for Advanced Performance Training. From 2014 to 2017 he trained as an acrobat and performer with Almanac Dance Circus Theatre, also serving as its Managing Director, and they toured to several cities including New Orleans, Burlington, VT, and Washington, CT.

In 2017/2018 he performed “Doppelbanger,” a solo autobiographical gay Tarot cabaret that he toured throughout Philadelphia and to Cincinnati and New York City. Since then, he has focused more on playwriting. (He also has a day job with The Wharton School, where he manages IT/business systems processes for Finance & Administration.)

His short play for “Visions,” called “Pirate/Queen,” is a piece in contemporary verse featuring a standoff between several captive pirates and their captor, the dreaded witch Queen Esmerelda Bon Bonny. “It's a silly, fun piece,” Nick insists, “culminating in dance and shenanigans best enjoyed by folks ages 16+ excited by pirates in drag.”