Celebrating a centennial season with the Bard

Celebrating a centennial season with the Bard 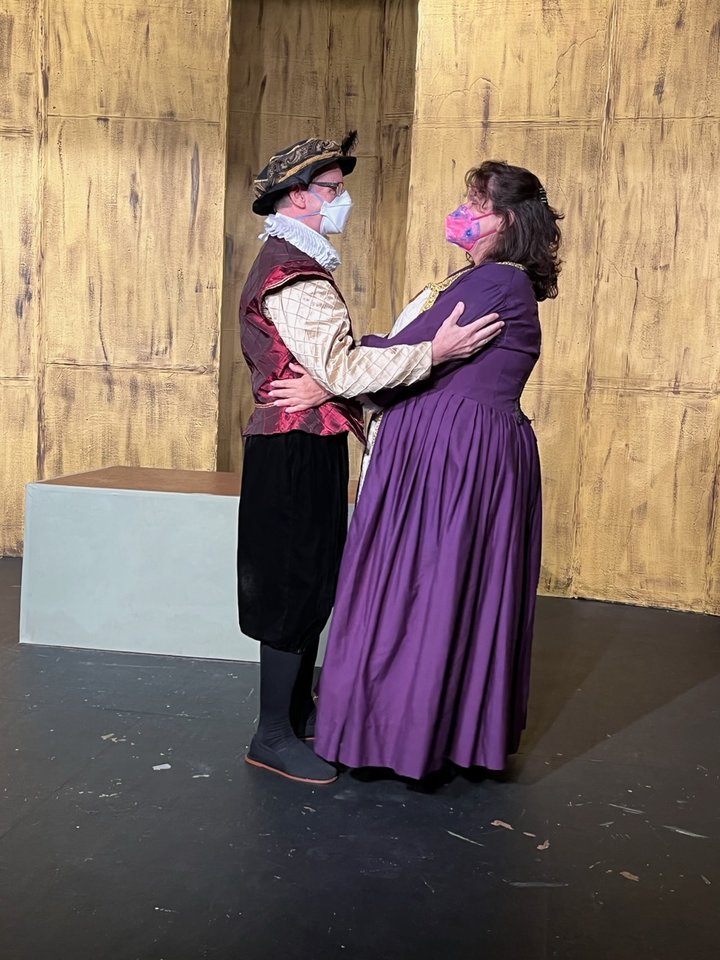 Actor Ross Druker, of Lafayette Hill, rehearses with Sarah Labov in a scene from a production of Shakespeare's “Much Ado About Nothing.”
Posted Thursday, September 29, 2022 12:00 am
by Rita Charleston

The play was written by Old Academy’s Judith Van Buskirk and is being directed by Carla Childs. Buskirk, a retired professor of history at New York State University at Cortland, has written two books about America’s fight for independence including her latest, “Standing in Their Own Light: African American Patriots in the American Revolution.” During her time in upstate New York, she also founded a community theater group while still finding the time to write this play.

Ross Druker, who takes on the role of Shakespeare and is the impresario of the evening, describes the production as a “sort of smorgasbord of Shakespeare plays. There's some singing, audience participation and more. It's a mix of comedy and tragedy. And it certainly is a fun and interesting show to do.”

A native of Brooklyn, Druker first came to Philly to work at the Rohm and Haas manufacturing company. He moved around a bit and now lives in Lafayette Hill, an area he describes as the perfect location for him.

“It's a beautiful area and is close to my work at Independence Blue Cross in Center City where I've worked for the past nine years,” Drucker said. “It's also close to the Blue Route, the various theaters I've worked at and more.”

Druker graduated from Rutgers University with a degree in computer science. Although he learned all about keyboards, modems and printers, one of his favorite pastimes remained singing and playing musical instruments.

“When I was in the fourth grade, I started playing the trumpet and eventually the guitar. Music became an outlet for me all through high school and college.],” he said.

While in college, Druker began taking singing lessons, and one of his teachers suggested that he try out for musical theater. “He thought my voice would be perfect. I took his advice, and that's how I eventually got involved in theater,” Druker said.

In Philadelphia, with an eye to doing some acting, Druker took acting classes at the Arden Theatre Company. His voice, theatrical abilities and perseverance eventually paid off, and he landed roles in productions such as “Doubt” at Old Academy, “A Little Night Music” at Narberth Community Theatre, and “The Crucible” at Forge Theatre. He also became a member of The Philadelphia Singers. Now with 30 years in the theater, Druker has also performed numerous Gilbert and Sullivan leading roles with the Savoy Company in Philadelphia and England.

“After all this time, I find the best part for me is the actual performing I do,” the actor/singer/computer whiz insists. “I also enjoy the collaboration between my fellow actors and the director. It just seems that everything works in perfect harmony when one discovers what's important and what works to bring the story to life.

“Of course, for me,” he added, “one of the biggest challenges I face is how do I become a better actor? There's also facing the rejection that comes with not getting a part, something you have to learn to deal with if and when it ever comes up. Rejection may simply come down to the director's choices and may have nothing to do with you, so you can't take it personally.”

And Druker is only too happy to hand out advice to would-be actors. “See as many plays as you can and be willing to work in any area of theater that comes your way, from learning staging to lighting to costuming,” he said. “The more you learn, the more valuable you become to the theater. And most of all, realize that community theater is very welcoming overall. So just give it a try.”