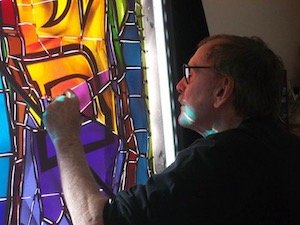 Noted American stained-glass artist and longtime Mt. Airy resident Charles Z. Lawrence died on Jan. 1, at 83. Lawrence, who began his career in 1956 as an apprentice to master craftsman Rudolph Henrick Beunz, was known for a bold, gothic revival style best typified by five windows in the Washington National Cathedral.

In the 1960s, while attending design school at Pratt Institute in New York City, Lawrence worked in the glass department of the Rambusch Decorating Studio where he perfected skills in glass painting and color selection.

In 1968, he went to work for the Willets Stained Glass studio in Chestnut Hill, where he went on complete prestigious commissions for the National Cathedral, the Temple of the Latter-Day Saints, and the Smithsonian Institution in Washington D.C., as well as the University of Rochester and Penn State University.

In the 1980s Lawrence established his own studio in Mt. Airy, completing additional commissions for the National Cathedral, the Lutheran Theological Seminary in Mt. Airy, St. Mary’s at the Cathedral in Andorra, the Burlington Bridge Commission in New Jersey, and the Gore-Tex Manufacturing Co. in Cherry Hill, New Jersey

Lawrence is survived by his daughter and son-in law Vanessa and Austin Watts of Brooklyn, New York, his daughter and son-in law Tracy and David Cangelosi of Chicago, Illinois, and cousin James Cannon of Frenchtown, New Jersey. A memorial service for Lawrence will take place on Saturday, Jan. 12, at 10 a.m., at St. Mary’s at the Cathedral in Andorra, 630 E Cathedral Rd. In lieu of flowers, please send donations to Keystone Care Hospice, 8765 Stenton Ave, Wyndmoor, Pennsylvania 19038.