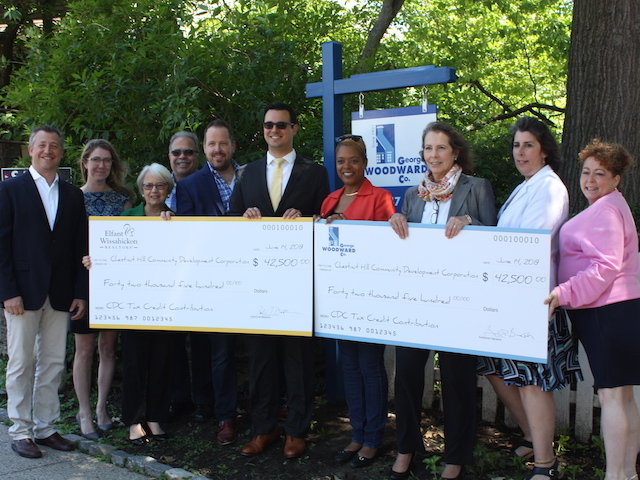 The Chestnut Hill Business District announced a tax credit partnership with Elfant Wissahickon Realtors and George Woodward Company, receiving two ceremonial checks for $42,000 each as a symbol of the $85,000 tax contribution by the two local businesses on June 14.

Dawson said the CHBD participated in the city program since 2013, “but faced a challenge a year ago, when its former partners became ineligible.”

“Failing to find a new partner would have meant losing eligibility for the five remaining years of the program – an outcome that would have resulted in Chestnut Hill losing $425,000 of future funding,” he said. “Fortunately, the George Woodward Company committed to providing the full $85,000 contribution in 2018, and beginning this year, both Woodward and Elfant Wissahickon agreed to share the contribution.

“Economic development makes each part of the community stronger, as it leads to job creation, neighborhood improvements and the success of small businesses,” said Dawson. “This partnership is especially beneficial for the South Hill, and because of it, the CHBD has chartered a special committee to revitalize this area by addressing commercial vacancy, public space improvements and new signage. Chestnut Hill is thrilled to have such wonderful partners who believe in this community and want to help keep our neighborhood thriving.”

Baumbach said Woodward was thrilled to be continuing its relationship with the Chestnut Hill CDC.

“We very much appreciate Councilwoman Cindy Bass and the City of Philadelphia in providing this opportunity for us to have a greater impact locally in our neighborhood,” she said. “We also applaud the Chestnut Hill CDC on the programs it has already completed. We look forward to working with Elfant Wissahickon Realtors on initiatives in the future that strengthen the community and really promote Chestnut Hill.”

Walsh said Elfant Wissahickon was “thrilled to be a community partner alongside the prestigious George Woodward Company.”

“Elfant Wissahickon Realtors has grown to be Southeastern Pennsylvania's largest independent real estate brokerage,” he said. “Although we now service all of Philadelphia and its suburbs, we have deep roots in Chestnut Hill and the Northwest community. Elfant Wissahickon is locally owned, and our agents and staff all live in the neighborhoods we serve. It is of utmost importance to us to support and invest in the communities and the organizations that support our communities, and to give back not just with financial support but also with service.”

Bass thanked Woodward and Elfant Wissahickon “for stepping up and being there in times of need.”

“The funny thing is, I represent Chestnut Hill, Mt. Airy, Germantown, Nicetown, Tioga, part of Olney, part of Logan, part of West Oak Lane and part of North Philadelphia,” she said. “In all those neighborhoods, they look different and feel different, but the one thing I have to say is, I always use Chestnut Hill as an example. I say that neighbors in Chestnut Hill don't allow anything in their community that they don't want to be there. I really feel that should be a standard in all of our neighborhoods … People may think that Chestnut Hill doesn't have any needs. Every community has needs, but what that need is varies from community to community.

“It's really my pleasure to be here to support you all for the hard work that you put in, and it shows. The Avenue is beautiful. People enjoy coming here. And it really is an effort that should be duplicated – not just in the 8th Council District, but the entire City of Philadelphia.”