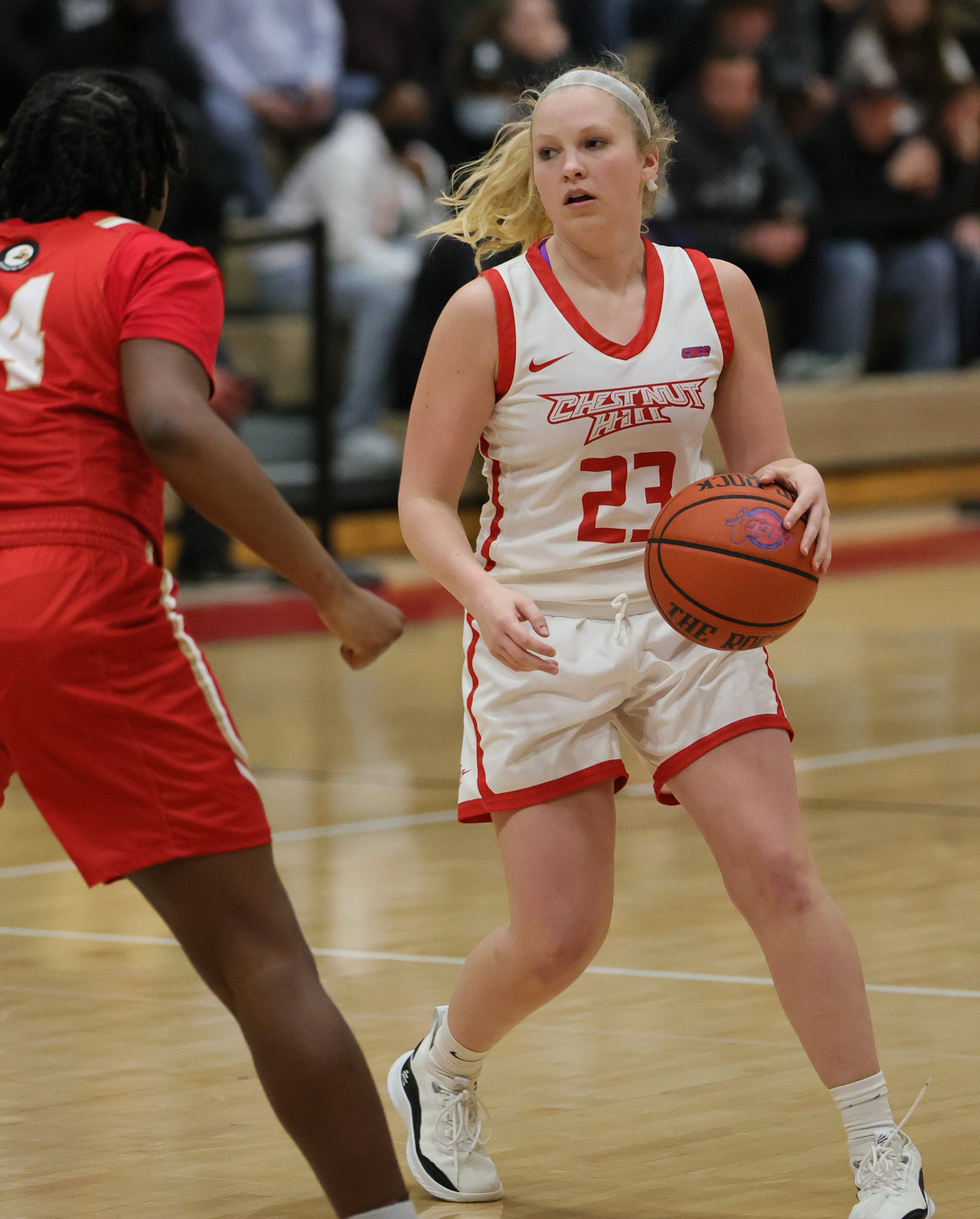 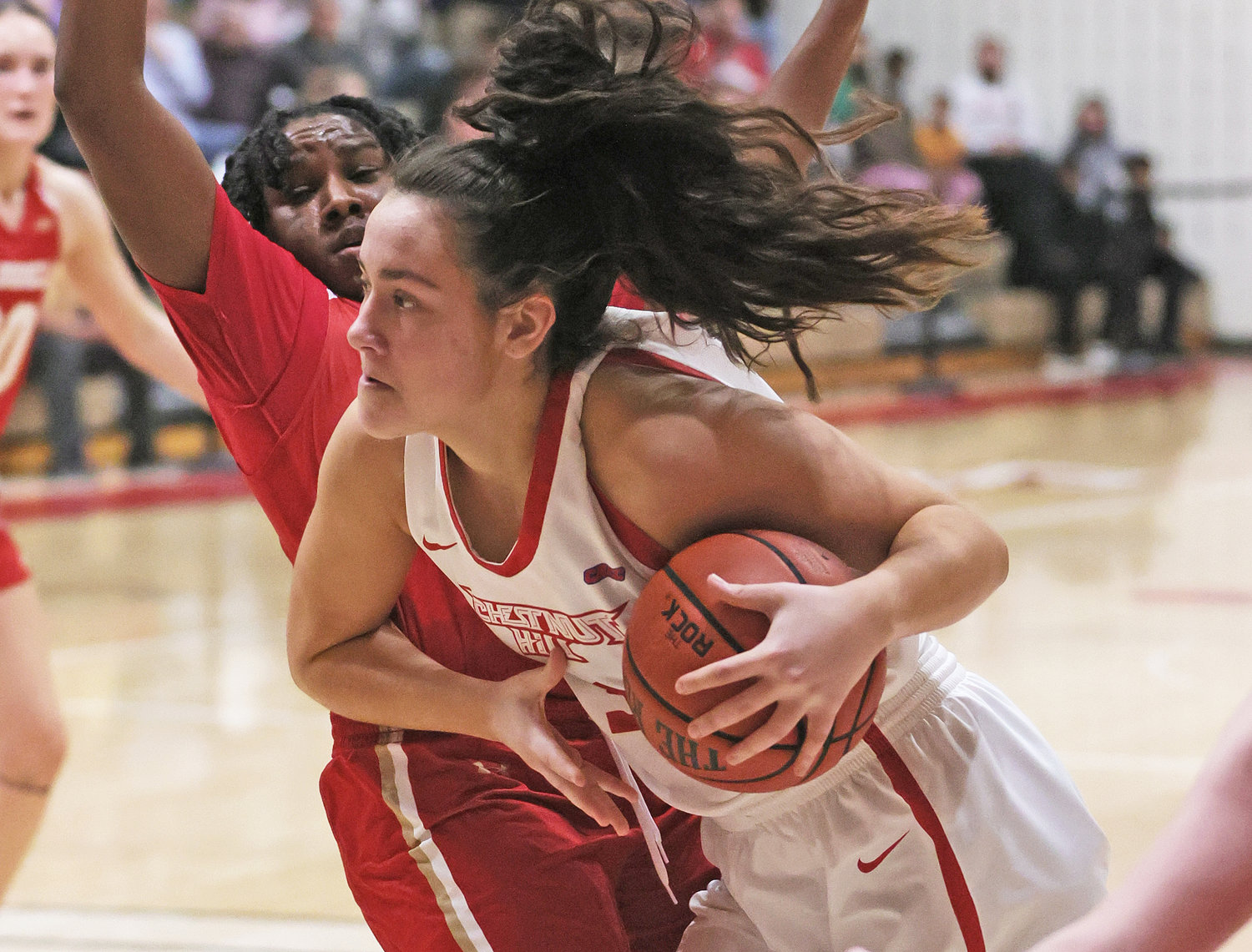 Freshman forward Emily Chmiel turned in her 12th double-double of the season last Monday, producing 16 points and 11 rebounds in a CACC quarterfinal victory.  Photo by Tom Utescher
Previous Next
Posted Wednesday, March 9, 2022 10:07 am
by Tom Utescher

Last Tuesday, Chestnut Hill College advanced through the quarterfinal round of the Central Atlantic Collegiate Conference women's basketball tournament, winning 82-66 over Caldwell (N.J.) University in its final home game of the 2021-22 season.

Junior shooting guard Lauren Crim rang up a game-high 26 points and senior small forward Bri Hewlett had 22 for the Griffins, who raised their record to 24-5 overall. A day later, Chestnut Hill was ranked number two in the East Region in final regular-season standings in NCAA Division II.

Chestnut Hill entered the eight-team conference tournament as the top seed from the South Division, so the Griffins were lined up with the fourth seed from the CACC North, the Caldwell Cougars.

CHC had beaten Caldwell, 72-60, in a road game in the middle of February.

The March 1 conference quarterfinal win brought with it a number of achievements for individuals and for the program. Chestnut Hill had appeared in the CACC women's tournament before, but this was the first time the Griffins won a postseason game in the conference.

Not long before the contest, it was learned that third-year head coach Jim Connolly was named CACC Coach of the Year and that 6'2" freshman post player Emily Chmiel had been selected Rookie of the Year. In the win over Caldwell, Chmiel chalked up her 12th double/double of the season (a CHC single-season record), with 16 points and 11 rebounds. She had previously been named CACC Rookie of the Week six times.

The sharpshooting Crim connected on eight of her 10 three-point shots, tying her own school record for made three's. Senior point guard Cassie Sebold (three points, four rebounds) registered 11 assists to set a new single-season record for the Griffins, now at 151.

When Crim begins to find the target from the three-point line early in a game, it usually spells big trouble for CHC opponents. She and Hewlett each plunked in a pair of treys as the Griffins rolled to a 14-4 lead in a little over three minutes. Hewlett finished the first quarter with 13 points as Chestnut Hill led 28-17.

The Cougars got a little closer over the course of the second period, despite five points apiece from CHC's Chmiel and fellow freshman Morgan Sterner, a speedy guard. Caldwell hit some long shots of its own and was back within eight points by halftime, 42-34.

As the second half began, the visitors made their most significant run at the lead. Several Cougars scored by driving and then pulling up for jumpers to get off clean shots. Around two-and-a-half minutes in, CHC was ahead by just one point (45-44), and a bucket by Hewlett momentarily gave the Griffins some breathing room.

With 6:12 left in the period, Caldwell netted one of two shots at the free throw line, closing the gap to two points, at 47-45. Chmiel scored from the paint, and Sebold and Crim canned three-pointers as Chestnut Hill expanded the gap between the teams. The margin was 10 points with over two minutes to go, but neither club scored after that and the tally was 60-50 at the end of the third quarter.

Three minutes into the fourth stanza the hosts led by nine (65-56), then a "three" by Crim and a baseline drive by Sterner spread the score to 70-56. CHC led by double digits the rest of the way as Crim put in her last two three-pointers of the night.

The Griffins got a total of seven points from Sterner, four from junior Lindsey Lane, three from Sebold, and two points apiece from senior Abby Spratt and freshman Emily Semerak.