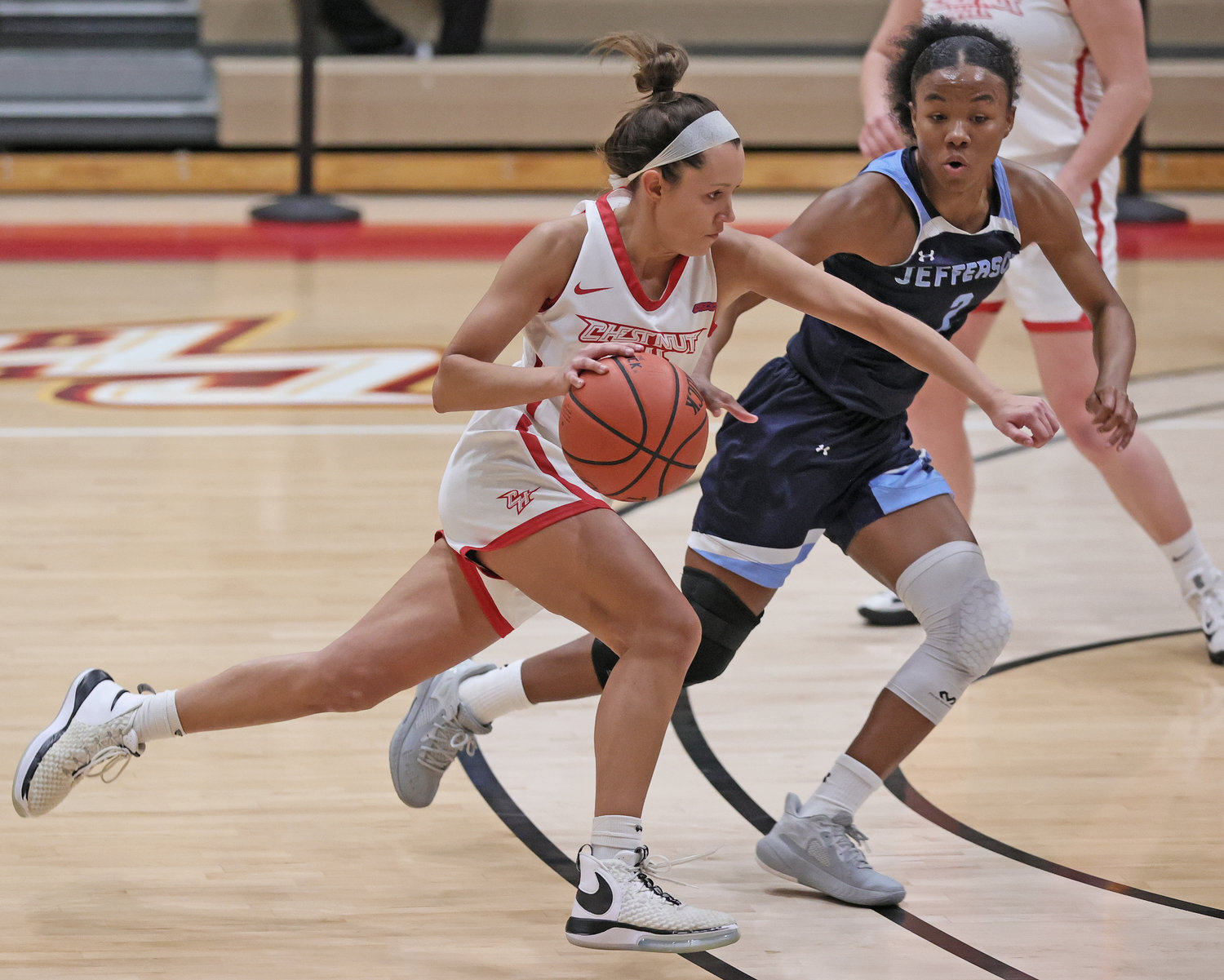 The women's basketball team at Chestnut Hill College continued to journey into unexplored territory right up to the end of the 2021-22 season. Last Friday the Griffins made their first appearance in program history in the NCAA Division II tournament, having earned the second seed for the eight-team East Region bracket playing at Southern New Hampshire University.

Historically, teams performing in the national tourney for the first time don't tend to win their opening games, and CHC was unable to defy the odds last week. In a close contest all the way through, Chestnut Hill led by a point with three-and-a-half minutes to go, but then fell to seventh-seeded Pace University of White Plains, N.Y., 59-53.

The Griffins, who were the top team in the regular season in the Central Atlantic College Conference, finished up with an overall record of 24-7. Pace, a member of the Northeast 10 Conference (along with top-seeded regionals host Southern New Hampshire), improved to 23-7 and advanced to play the CACC tournament champion, Philadelphia's University of the Sciences.

USciences had won a quarterfinal game over Le Moyne College of Syracuse, N.Y., 64-38, but the Devils saw their season end in the semifinals with a 65-60 loss to Pace. Another CACC team in the East Regional, Jefferson University, followed a similar scenario in its NCAA appearance. The Lady Rams (seeded fourth) defeated fifth-ranked Bentley University of Waltham, Mass. in the quarterfinals, 50-47, but then lost in the semi's, 70-52, to Daemen College (located near Buffalo, N.Y.). Daemen was seeded at the bottom of the field of eight, but knocked off top-seeded Southern New Hampshire in the quarterfinal round.

Chestnut Hill College's last victory of the 2021-22 season had come back on Tuesday, March 1. Seeded first for the CACC tournament, the Griffins knocked out number eight Caldwell (N.J.) University, 82-66, to reach the conference semifinals.

Chestnut Hill had defeated each of the other conference semifinalists during the regular season, but the games against its two Philadelphia rivals had been close. The Griffins would be playing Jefferson, and possibly USciences, for a third time in the same season.

In the CACC semifinals on Saturday, March 5, Jefferson got the jump on CHC, going up 19 points by halftime and continuing on to a 60-45 victory. The following day, March 6, Jefferson fell to USciences, 53-44, as the Devils captured the 2022 CACC title.

Starting out in their first NCAA tournament game in New Hampshire, the CHC Griffins led 14-11 at the end of the first quarter, but Pace was ahead at halftime (29-25) and at the three-quarter mark (41-40).

When Chestnut Hill players drove to the basket, they frequently were halted a little outside the paint and tried to make awkward lay-ups that didn't go in. The Griffins' perimeter game was also lacking; they would go three-for-11 from the three-point line.

After the Griffins led 49-48 early in the fourth quarter, Pace went ahead for good with a three-pointer. CHC was still within two points of the leaders when it called time-out with 13.5 seconds left. However, on the Griffins' inbounds pass the ball was tipped and stolen by Pace, which then went four-for-four at the free throw line for the 59-53 final tally.

CHC played all but its first eight games without senior forward Leah Miller, who was averaging 16.5 points and 11.5 rebounds per game when she suffered a torn ACL in early December. The Griffins have some talented young players, but look to be in somewhat of a rebuilding mode next season with the loss of Sebold, Hewlett, and guard Abby Spratt.

Jefferson was a much younger team this winter, starting three sophomores and two freshmen at the end of the season. It also remains to be seen if any of the former USciences players find new homes at other CACC schools.