Game host Jefferson University had won eight in a row, while visiting Chestnut Hill College had previously had a win streak ended at 13 games with a February 9 loss in overtime at Dominican College in Orangeburg, N.Y. 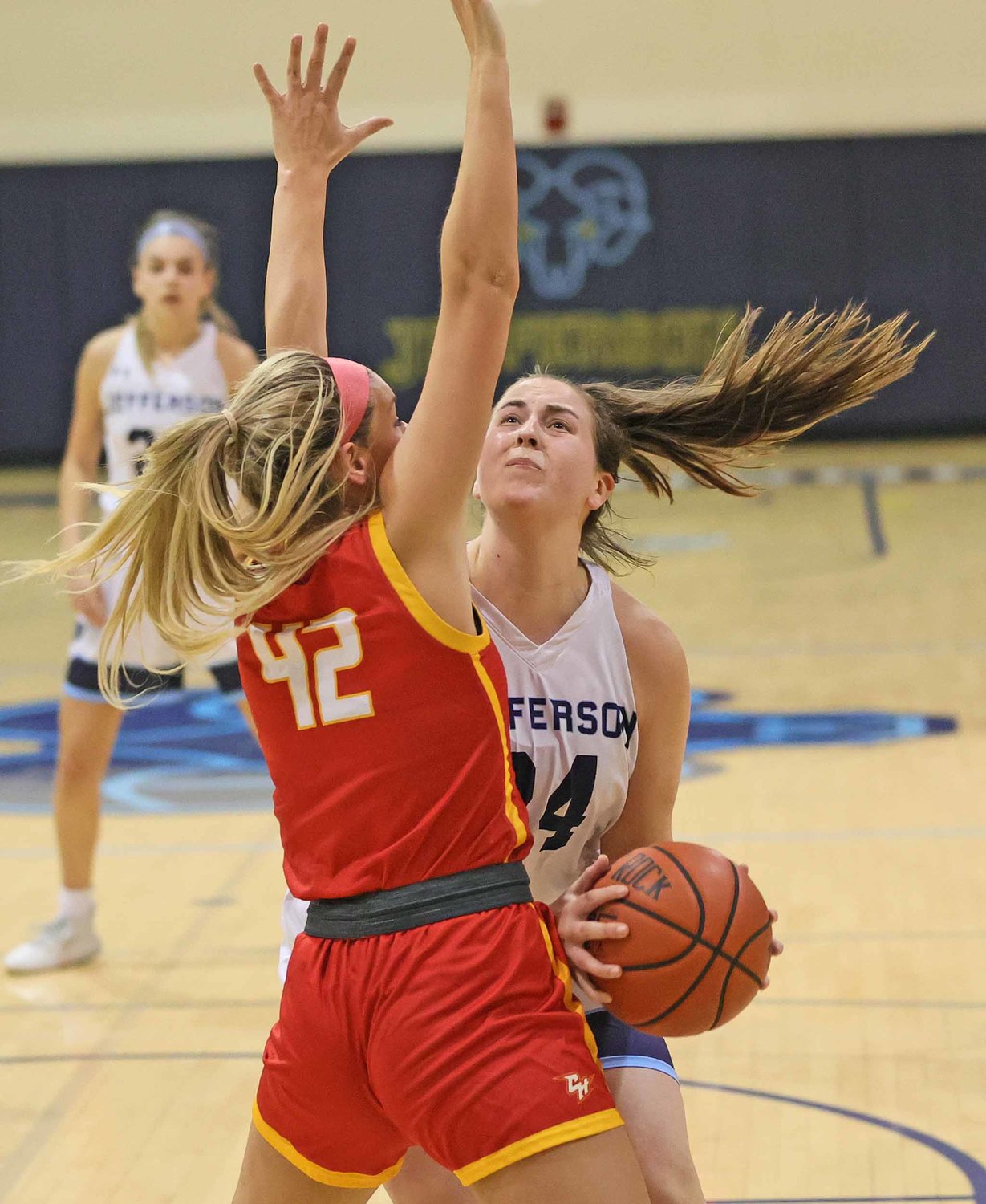 Down in the paint, Jefferson freshman Cassie Murphy (with ball) is confronted by CHC junior Lindsey Lane. Photo by Tom Utescher 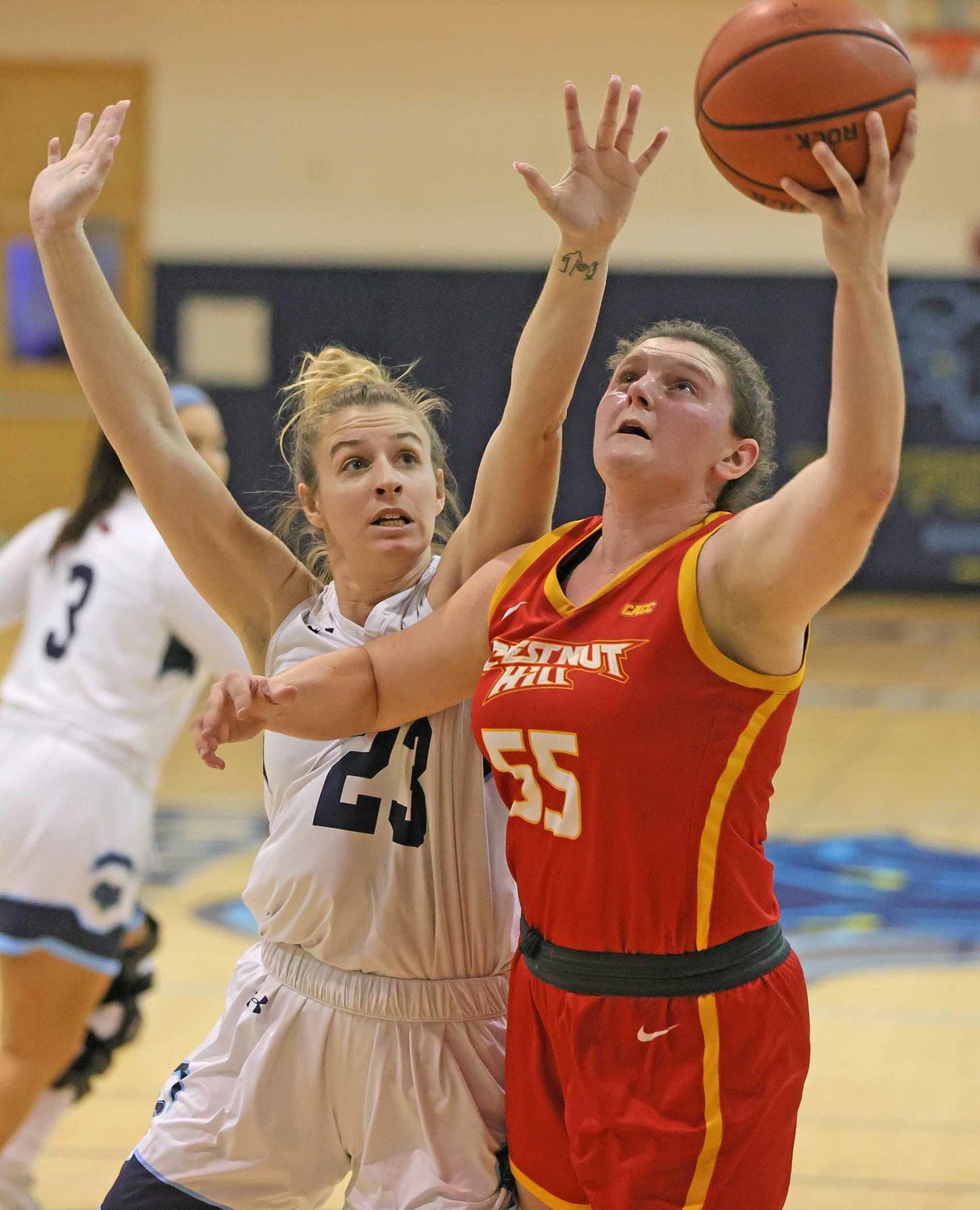 Chestnut Hill senior Bri Hewlett (right), who would earn the game-high in both points (24) and rebounds (11), gets off a shot against Lady Rams senior Allie Warren. Photo by Tom Utescher
Previous Next
Posted Wednesday, February 23, 2022 10:56 am
by Tom Utescher

In last Tuesday's clash between two strong women's basketball teams in the Central Atlantic Collegiate Conference, one squad was coming in with a win streak and the other had recently had a long string of victories snapped.

Game host Jefferson University had won eight in a row, while visiting Chestnut Hill College had previously had a win streak ended at 13 games with a February 9 loss in overtime at Dominican College in Orangeburg, N.Y.

The CHC Griffins bounced back into the win column with a CACC victory over Caldwell (N.J.) College on Saturday, February 12, then they made it two in a row on Tuesday as they pulled out a 65-60 win at Jefferson. Small forward Bri Hewlett scored inside and out for a career high 24 points while also grabbing 11 rebounds, and fellow senior Cassie Sebold, the Griffins' point guard, recorded 17 points, three assists, and four steals.

Jefferson, on the other hand, was paced by two of its youngest players, both freshmen. Center Cassie Murphy finished with 15 points, seven rebounds, and four assists, and guard/forward Sam Yencha contributed 14 points and six rebounds.

Chestnut Hill remained the leader in the CACC South with a 14-1 conference record, and an overall mark of 21-4 helped the Griffins gain the number three ranking in the NCAA Division II East Region. Jefferson (11-4, 19-6) was third in the CACC South, in between two other Philadelphia schools, second-place University of the Sciences and number four Holy Family University.

Starting with a lay-up by sophomore Haley Meinel, Jefferson got out to an 8-2 lead over Chestnut Hill last Tuesday, also receiving two midrange jump shots from Yencha. Lady Ram defenders prevented the Griffins from driving all the way to the basket, and several of the visitors missed lay-ups that they shot from a couple of steps too far out.

Hewlett did make good on a drive and soon added a three-pointer to boost the CHC offense. Later in the period, Sebold scored a total of nine points from the three-point line, the foul line, and on-the-drive. Junior Lauren Crim added a "three" and two free throws, and Chestnut Hill led by nine points before Murphy's short jumper at the buzzer made it 25-18.

With points from three different players at the start of the second quarter, Jefferson pulled even at 25-25. Meinel, who'd again started Jefferson off with a lay-up, dropped a three-pointer from the left wing later on, but Hewlett and Sebold bagged treys for the visitors. Freshman post player Emily Chmiel had come off the bench for CHC in the first quarter, contributing the occasional lay-up. The Griffins got up by five, but at the close of the quarter the hosts had the last word once more, as a jumper by freshman Martha Apple locked in a 35-32 halftime score.

The third round also ended with a three-point CHC lead, now 51-48. During the quarter, though, Jefferson had gone ahead by one point on two occasions. The second time, a third personal foul on CHC's Chmiel sent Murphy to the line for two made free throws, and the Lady Rams led 46-45.

Junior forward Lindsey Lane (who would score eight of her 10 points in the second half) nudged the visitors back into the lead, and Hewlett followed up with a three-point bucket from the top of the key.

Hewlett opened the fourth period with another "three". Not flashy, the senior is the kind of hardworking player whose impact is realized when one actually looks at the stat sheet and sees what she's produced. She can shoot outside, maneuver to score from the paint, and rebound.

The diminutive Sebold is easier to notice; she skitters around the court like a water strider on the surface of a pond. She'll slip in to the basket to score, steal the ball back, and pop in an unexpected jumper.

In the clutch, in a close contest, she seems to propel the Griffins to victory by force of will.

Sebold hit the floor hard about two minutes into the fourth quarter, when Jefferson was in the midst of a 6-0 spurt that would trim a 50-58 shortfall back to a two-point deficit. The guard recovered and play resumed, with the 58-56 figure staying on the scoreboard for a few minutes. With 2:15 remaining, CHC's Lane sidestepped a defender near the foul line and drilled a jumper.

Later, with 48 seconds left, Jefferson put the Griffins in the foul bonus and Sebold hit both shots for a 62-56 tally. Rams sophomore guard Morgan Robinson answered in kind when CHC committed its third team foul. Chestnut Hill called time out, but turned the ball over when play resumed. When Yencha scored a lay-up off of a pass from Murphy, Jefferson was back within two (62-60) with 36 seconds left.

The Lady Rams now had to foul, though, and they sent CHC's Crim (an 83-percent free throw shooter) to the line to put in a pair. The host team came back down the floor and got the ball to Murphy in the paint. Although the skillful freshman would lead her team with 15 points, CHC had at least not allowed her to score 30, as she did in the teams' first encounter. Now, 6'2" Griffins freshman Emily Sekerak came up with a timely block on a shot by the Jefferson center. She received a clearly visible shove in return, but there was no call by the officials.

The refs did call a foul to Sebold's benefit a few seconds later, and with 17 seconds to go she made the first of her two free throws to stick the 65-60 final up on the board. After Jefferson missed three shots, one a three-point attempt, it was over. Penn Charter grad Kait Carter, a CHC sophomore, did not score but led her team in assists, with five.

Jefferson is a young team with a lot of talent, and its future looks bright. Chestnut Hill also has some good young players, but with some of its key contributors in their senior season, the Griffins must live in the moment.

On Tuesday a veteran basketball observer, a Jefferson fan in the stands, remarked that Chestnut Hill seemed to be "a very close team."

He was spot-on; there is a clearly an emotional bond between these Griffins. At the beginning of the 16-1 run they've made since early December, injury and Illness had them down to just eight active players.

To paraphrase the famous speech in Shakespeare's Henry V, they are a happy few, a band of sisters, and for them every game is St. Crispin's Day at Agincourt.