Mt Airy’s 22nd ward wasn’t far behind, with a 62% turnout that put the neighborhood in third place, closely trailing Center City’s 15th ward, which had a turnout of 63%. South Philadelphia’s 2nd ward, where turnout was 61%, came in fourth and Roxborough’s 21st ward rounded out the top five wards with 59%. 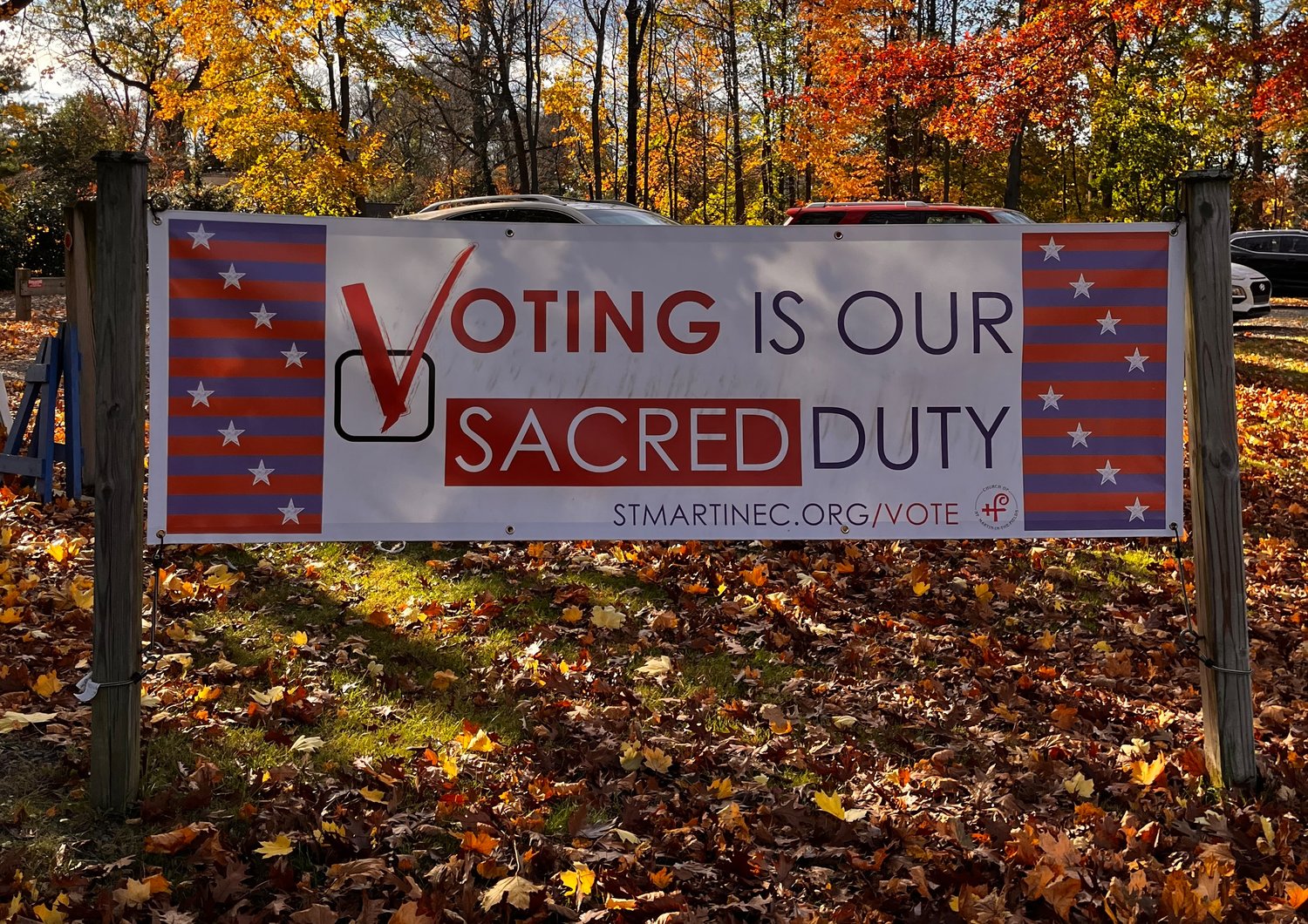 Voter turnout in Chestnut Hill was the highest in the city on Tuesday with 69% of all registered voters in the 9th ward casting a ballot to help Democrats sweep the state as of Friday afternoon – putting John Fetterman in the U.S. Senate and Josh Shapiro in the governor’s mansion.  The 9th ward also includes some parts of Mt. Airy

The 22nd ward, which is entirely in Mt. Airy, wasn’t far behind, with a 62% turnout that put the neighborhood in third place, closely trailing Center City’s 15th ward, which had a turnout of 63%. South Philadelphia’s 2nd ward, where turnout was 61%, came in fourth and Roxborough’s 21st ward rounded out the top five wards with 59%.

Preserving democracy and maintaining access to legal abortions appeared to be driving issues for many of those voters, Miriam Schaefer, a poll worker in the 9th Ward’s 6th division told the Local.

Particularly notable this year were the number of young voters who showed up, she added.

“I’ve never seen anybody under the age of 30 there before,” Schaefer told the Local. “To see these people who were 20 years old, that was great. Lots of first time voters - it was wonderful.”

Shoshana Bricklin, a committee person in the 9th ward, said she saw one parent bring her son in to vote for the first time.

“That’s important to show parents taking their kids by the hand and showing them that this is an important thing to do,” she said. “I certainly did it with my kids.”

According to Tufts University’s Center for Information & Research on Civic Learning and Engagement, Pennsylvania had been ranked the fourth in the nation for states that were expected to have a disproportionately high number of young voters based on demographic data and predictive competitiveness.

According to exit poll data, Fetterman was especially popular with the age 18-29 demographic, winning 72% of their vote.

One of those voters, 18-year-old Mia Rosof-Mallory, voted for the first time this year in Mt. Airy. She said she was driven to the polls by the abortion issue – which was triggered by the U.S. Supreme Court’s overturning of Roe v Wade.

“It’s not something that I really thought about too much, I just thought it was one of my rights,” she said. “But when the court case happened, I realized it was something that could be taken away and I needed to fight for it.”

It felt good, she said, to be old enough to register her opinion at the ballot box, she said.

“I’ve always been excited to vote,” she said. “It was really cool to be able to.”

“This is the first time young women, who have always thought they had this right to bodily autonomy, were going to be at risk if they made certain choices,” she said.

According to Ahmad, many young voters seemed to be getting their motivation to vote from social media.

“There were a lot of TikTok influencers involved,” Ahmad said. “On Instagram and TikTok - that’s where they see recipes and dog videos, but also voting information.”

Rosof-Mallory, for instance, said her main source of political information is Instagram.

“There’s a lot of stuff about politics on Instagram,” she said. “Every day there’s stuff posted that I didn’t know.”

She does follow some traditional news outlets too, she said, including the New York Times. She had a free account with that paper through her high school, but lost it when she graduated, so now she uses her mom’s account.

“There’s definitely a space for newspapers online,” she said, “but I think most news going forward is going to come from social media because people just use it so much and it’s used by everyone.”

Rosof-Mallory said her generation is different from that of her parents, who she sees picking up newspapers or turning on the TV to actively inform themselves about current events. She and most of her peers don’t seek out the news, she said. It just finds them.

“I’m not constantly seeking out news, it just comes to me,” she said.

Eli Ziegler, a 20-year-old Chestnut Hill resident and first time voter, who’s also a student at Temple University, cited abortion rights and climate change as his main motivators for getting to the polls.

“Women’s rights,” he said. “I know for a lot of my friends and me - that’s one of the reasons why we voted.”

Most of the accounts he watches, however, are run by traditional cable news sources, with CNN and CBS being the ones he watches most.

“It depends on what pops up and what looks reliable,” he said.

He also watches a lot of political comedy shows like The Daily Show, which features comedians Trevor Noah and Jordan Klepper, on YouTube.

“I wouldn’t say I’m the most politically savvy to be honest. A lot of my friends know better than me what’s going on,” he said. “But our generation not having a voice, and needing a voice in politics right now, is a priority.”

Jake Schwartz, a 24-year-old Mt. Airy resident, thinks the best way for the Democratic Party to amplify that voice is by focusing on issues young people care about. Schwartz agrees that abortion was a key issue that drove people his age to the polls this time around, but he doesn’t think that will last. Going forward, he’d like to hear more about climate change, something that is expected to affect his generation more than older ones.

A lot of his generation, he argues, isn’t interested in voting despite being civically engaged. He thinks the solution is to create tangible change that can be seen in the world by young people. The infrastructure bill passed by the Biden administration nearly a year ago, for instance, is too focused on repairing and replacing the country’s poor infrastructure, he said. Schwartz argued that it should also be creating new infrastructure - not just fixing what’s already there.

“We’re not going to have high speed rail,” he said. “We're just rebuilding the old stuff. It’s nothing new or splashy. Won’t pop off the front page of papers. That’s the Democrats’ problem.”

The cost of not creating tangible change, Schwartz said, isn’t necessarily that young people will start to vote Republican. It’s that they just won’t vote at all.

“A lot of people younger than me don’t have an interest in voting,” he said. “They need an issue that will force them to vote. Abortion was that issue this time and climate will be that issue in the future.”

The Democratic Party also lacked effective messaging around some of the legislation it passed during President Biden’s two years in office, Schwartz said, including the infrastructure bill.

“Nobody’s talking about infrastructure,” he said. “They passed three or four major pieces of legislation, but that didn’t get through to people. No one is talking about the big bills in D.C. The message did not break through.”

CJ Wolfe, 26-year-old founder and CEO of a photography studio in Kensington called Immortal Vision Studio, said that he regularly puts out political content geared for young voters on his studio’s Instagram account in addition to posting content about his business.

“We wanted to provide information about what Congress’s job is, what the Governor’s job is and do it in a way [young people] can understand it,” Wolfe said. “We see a big change when people say ‘hey I didn’t know the House of Representatives’ job was to do this’ or ‘hey I didn’t know I could register to vote.’”

During this past election cycle, Wolfe said he helped nine young people register to vote whom he interacted with on Instagram. He helped register another seven people whom he met in person in his studio. He’s able to bring more people into the voting tent, he said, because he looks and talks like the young people he’s registering and educating. His entire staff is under 30.

“In order to capture the young vote, and first to capture the awareness of how important voting is, we must show young people in a visual concept something that they can relate to to make them say ‘hey I need to register and show up and vote,’” said Wolfe. “And better yet, I need to do my research to know what I’m voting for.”