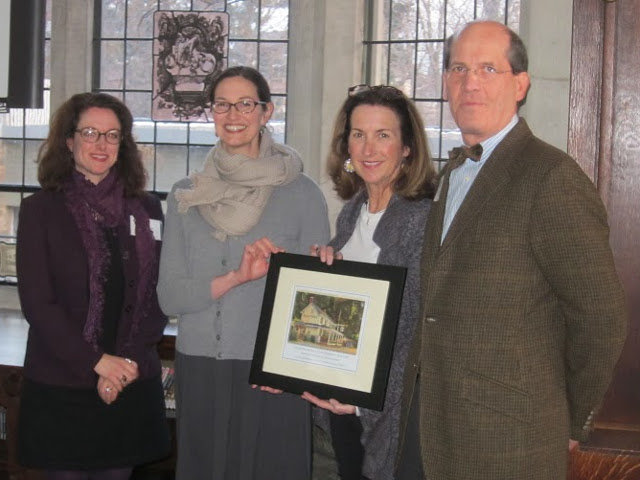 Welcome to the Local's newest bi-weekly column: "Discovering Chestnut Hill," written by the members and friends of the Chestnut Hill Historical Society. CHHS has been working to protect and describe the most wonderful aspects of this green, vibrant historic urban village for the past 48 years.

Here you will discover information about taking care of your historic house, fascinating gems from our archives, and a celebration of great architecture and great figures in our history. Along with us, you will explore the natural treasures of our cultural landscapes and open spaces and honor the many stunning examples of stewardship in our community.

We are proud to begin this column with a description of our first annual Preservation Recognition Awards. Presented at the historical society's annual meeting in January, the awards honor exceptional projects in the Chestnut Hill National Register Historic District (virtually all of Chestnut Hill). In this initial column we pay tribute to two winning projects – both demonstrating remarkable stewardship over many decades.

We salute Springside Chestnut Hill Academy for its commitment to the significant architecture in its care with a Preservation Award for the renovation of the Henry Library. The work over the past summer focused on returning the space to its original appearance at the time it was converted to a library.

The firm of Duhring, Okie and Ziegler designed the original Henry Library space in 1906 (It had been the dining room for the Wissahickon Inn). The inn, built in 1883-84 by Henry Howard Houston, was designed by his preferred architects George W. and William D. Hewitt and constructed by his go-to contractor William C. Mackie.

For their care of the Valley Green Inn since 1934, the Historical Society honored the Friends of the Wissahickon with a Stewardship Award. We appreciate their continual investment of time, money, and volunteer power to protect and preserve the inn and its surroundings.

To commemorate its 90th Anniversary in 2014, the Friends of the Wissahickon refurbished the inn, which is the most immediately recognized man-made structure in the Wissahickon. For plans for the maintenance and capital improvements to the inn, the Friends contracted with historic restoration architects Frens & Frens in 2013.

The Valley Green Inn Refurbishment and Improvements Project was led by interior designer Ann Kelly. Exterior repairs included repainting the outside, masonry repairs to the stone steps, restoration of windows in the dining room, and much more. Essential behind-the-scenes repairs were improvements to help protect the structure such as a backflow preventer, sump pumps in the basement, and a new generator.

The Valley Green Inn – the last remaining survivor of the inns and taverns along Forbidden Drive – was constructed about 1850. Over recent decades the Friends of the Wissahickon made major investments in both the inn and its surroundings. This work included the attractive landscaped setting for the inn and improved public access, following a design by Andropogon Associates.

In a future article we will concentrate on two additional award winners and add information from our Resource Center. The owners of a significant historic house built in 1857 won a Stewardship Award. They chose to replace the entire roof instead of patching the deteriorated sections of the cedar shingle roof.