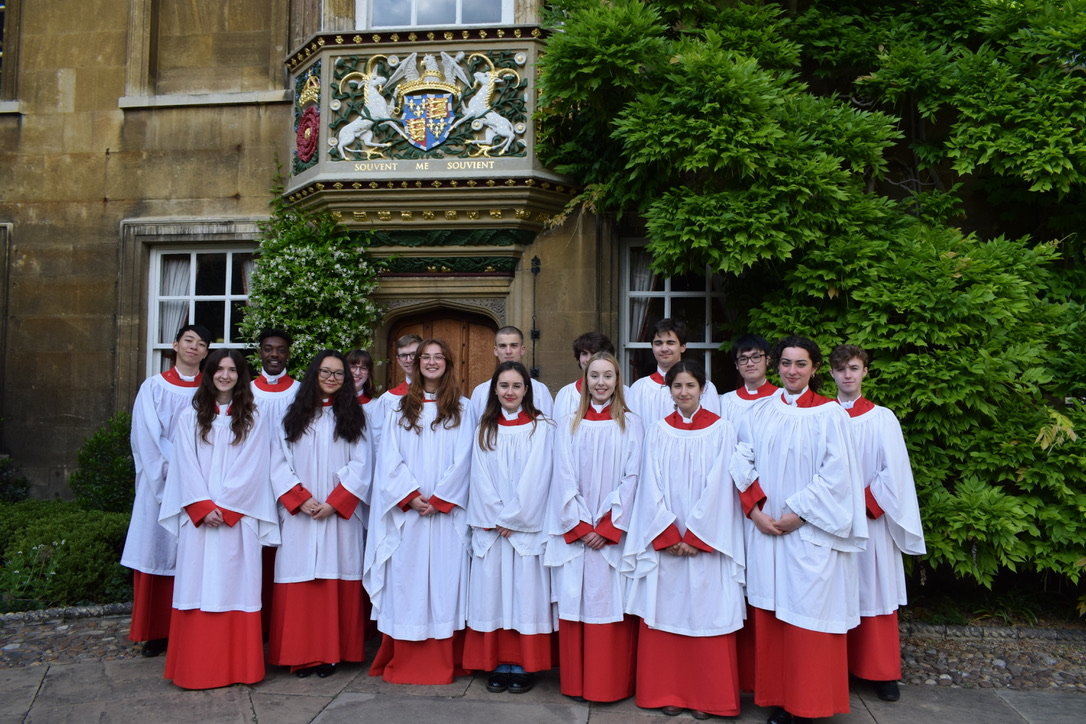 Christ’s College is one of the constituent colleges at Cambridge University, which was founded in 1209. The College, founded in 1505, has boasted a chapel choir since that date. Its principal function has been to sing services in the College Chapel. Choral Evensong is sung twice a week during the full term. The choir also sings for other events such as special feasts, weddings and memorial services. It also tours and records extensively. The Church of England remains, perhaps, the greatest curator of centuries of sacred choral music.

The choir is comprised of 23 singers plus three organ scholars. The ensemble’s overall tone throughout the concert was well-rounded and smoothly blended. The sopranos’ singing lacked the bracing, ethereal timbre of the boy trebles who traditionally sing the upper lines of the choral repertoire of the more famous chapel choirs at Cambridge and its historical rival, the University of Oxford, founded in 1096. Still, there was an admirable transparency Saturday evening.

The male and female members of the alto section produced a darker yet still translucent tonal color that provided a warm support for the sopranos. The tenors sang with a tawny clarity while the basses were solidly resonant.

Phrasing was particularly impressive in the performance given the concert’s opening work, Victoria’s unaccompanied “Jesu, dulcis memoria.” The long lines of the Renaissance score’s polyphony were effortlessly supported. Rowland efficaciously employed jaunty rhythms and cogent changes in tempo in Purcell’s “I was glad.” Small, individual sections were given their individual due while nonetheless placed organically within the overall structure of the work. The composer’s use of canonic writing in the closing “Glory be to God” was especially well projected.

Five movements from Parry’s “Songs of Farewell” brought the program’s first half to a touching conclusion, particularly during this time of loss from both COVID and uncontrolled gun violence. The first two, “My soul, there is a country” and “I know my soul hath power to know all things,” are set for four voices that gently project personal grief expressed through gracious melodies and sweet harmonies.

The addition of a fifth line in “Never, weather-beaten sail” beautifully filled in the middle register between high and low voices. “There is an old belief” glowed with haunting nostalgia. Rowland and his singers sustained the remarkably slow tempo with nary a moment of unevenness. The fuller texture of “At the round earth’s imagined corners” rounded out the set in a rendition that revealed a moment or two of upper register weakness that nonetheless didn’t undermine the overall picture of spiritual reassurance.

After intermission, Rowland led the choir in the first of two settings of the traditional Latin text, “Ave verum corpus” (“Hail, true body”), that composed by Sir Edward Elgar. One selection later, he and the choristers sang Mozart’s earlier version of the same lyrics. It was a wise decision to place the Elgar before the Mozart. Although the English composer’s work glows with romantic warmth, Mozart – one of the supreme musical geniuses of all time – achieved a sublime apotheosis of revelation of the full meaning of the words in his score.

Accompanied by the organ, Rowland led his young singers in a lustrous interpretation of the Elgar and an even more inspired performance of the Mozart.

Finzi’s “Lo, the full final sacrifice” proved itself to be the concert’s most impactful piece of music. Employing the organ to establish a dark and troubling mood from the very start, the text is both dramatic in its narrative and introspective in its probing delineation of complex, haunting emotions.

The score is also a compendium of the centuries of choral writing that have gone before and that have led directly to it. Evocations of Gregorian chant, references to the first medieval harmonies growing out of plainsong, then Renaissance polyphony, baroque and classical forms moving into romanticism, and the final flowering of modern styles that have found support in the Anglican traditions of a catholic musical language all challenge the listener to follow in its train. It received a powerfully moving rendition.

The concert was masterfully rounded out by exemplary readings of Vaughan Williams’ “The turtle dove” and Stanford’s “The blue bird.” The single, and delightful, encore was a choral arrangement of Billy Joel’s “So it goes.”