A ceremonial groundbreaking for the $9 million expansion and renovations of Engine 37, the oldest active fire station, was held on June 26. Digging in are (from left) Robert Daniele, project manager … 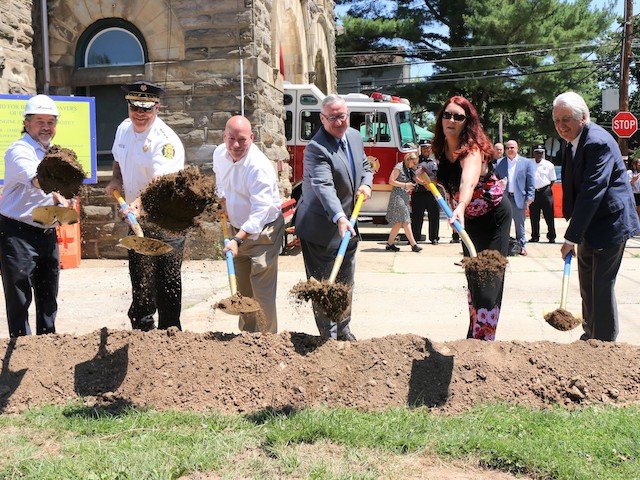 Engine 37's station, at 101 W. Highland Ave., was originally designed by Philadelphia architect John Torrey Windrim in 1894. The redesign by Cecil Baker and Partners will add 3,408 square feet to the current 8,678-square facility.

Kenney said it was an exciting day for the city, the fire department and the residents of Chestnut Hill.

“We are beginning a $9 million project to renovate this historic 125-year-old firehouse,” he said. “When this station was built in 1894, the fire department was using horse-drawn equipment and the attic above the building was a hay loft. Today it is difficult for 21st century fire trucks to fit through these doors, which are only nine and a half feet wide.

“Over the next two years, we will overhaul this building to find sufficient space for fire vehicles and modern amenities for the hard-working members of our department. The addition will be appropriate for this neighborhood and complement the original station that was added to the Philadelphia Register of Historic Places in 2015 and the Chestnut Hill’s Conservancy Architectural Hall of Fame in 2016.

“Thanks to the City’s Percent for Art program the new firehouse will also have an outdoor bench to invite interactions and conversations with the community. The new firehouse will help the fire department better serve the city and especially the residents of Chestnut Hill.”

Fire Commissioner Adam Thiel thanked everyone who was involved in the “long process to ensure that the project was consistent with the character” of the community while still providing “all of the modern amenities and essential elements of 21st-century fire emergency services” from a historic building.

“I am grateful we were able to work with the Department of Public Property and many other partners to preserve a piece of the Philadelphia Fire Department's storied past while adding essential components of a modern firehouse,” Thiel said. 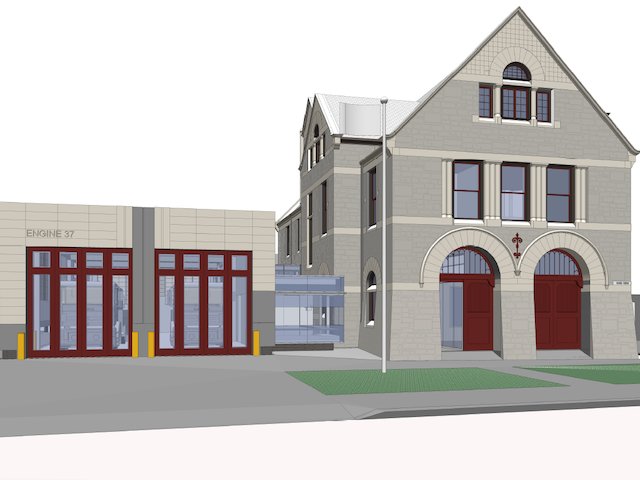 Architect’s rendering of the renovated Engine 37 firehouse in Chestnut Hill.[/caption]

Deputy Fire Commissioner Craig Murphy said Engine 37’s logo boasts that they are the “tightest in the city” because to squeeze the current fire engine through the station’s narrow doors firefighters must use modified handrails and retractable side mirrors.

Besides garage doors that are wide enough for today’s fire apparatuses, the station’s new features include a decontamination area with specialized washers and dryers for cleaning bunker gear to minimize the risk of cancer, a multipurpose training room, exercise room, new HVAC system, modern kitchen, bathrooms and locker area.

Joyce Lenhardt, a Chestnut Hill Community Association board member, said the organization was “excited that the firehouse addition is underway and appreciate the careful and thorough process that included much community involvement and the design by Cecil Baker + Partners, which stands alone as a thoughtful contemporary design and respects and works harmoniously with the historic building,”

Larry McEwen, another CHCA board member, added that the CHCA appreciates being part of the City of Philadelphia’s Percent for Art Selection Committee “and looks forward to sharing with the firefighters the use of ‘Fireman’s Arc,’ sculptural seating designed by artists Jill Sablosky and Erica Ehrenbard, which will be carefully placed in the lawn area adjacent to the original firehouse.”

Lori Salganicoff, executive director of the Chestnut Hill Conservancy, said she was grateful to be able to thank Mayor Kenney at the groundbreaking “for preserving the historic Chestnut Hill Fire Station, even though its future use is not yet clear.”

“With this project, the city both retains a beloved historic building and creates a fire station complex that functions as the community and our firefighters deserve,” she said.

Salganicoff said she was happy that the Mayor agreed that “this approach to adapt significant historic buildings should be encouraged across the city, rather than to demolish them when a current use becomes obsolete.”