Near the end of the 1990s, welfare reform booted roughly four million women off relief and into the job market. The assumption in the buildup to this action was that a job was the ticket out of poverty and that the only thing holding back welfare recipients was their reluctance to get out and get one. 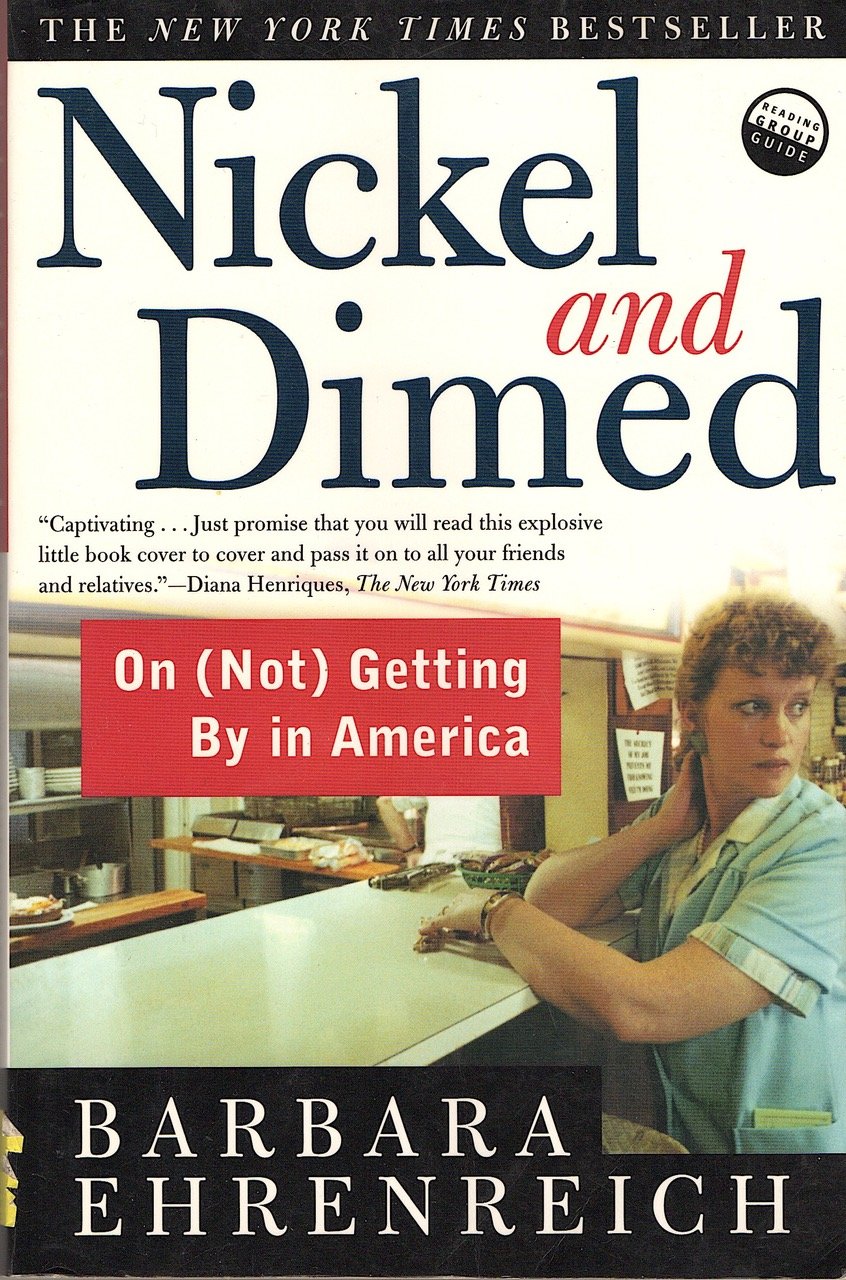 Near the end of the 1990s, welfare reform booted roughly four million women off relief and into the job market. The assumption in the buildup to this action was that a job was the ticket out of poverty and that the only thing holding back welfare recipients was their reluctance to get out and get one. As Barbara Ehrenreich writes in "Nickel and Dimed," we all grew up hearing the point of tedium, that “hard work” was the secret of success: “Work hard and you’ll get ahead” or “It’s hard work that got us where we are." But no one ever warned that it was possible "to work hard – harder than you ever thought possible – and still find yourself sinking ever deeper into poverty and debt."

Ehrenreich grew up with a strong social conscience and in adult life put aside her career in biochemistry to start reporting on American social issues. Born in 1941 and still active, she describes herself as a "myth buster by trade." Gifted with a brilliant mind, a leaning toward iconoclasm, and a nasty sense of humor, her work has earned many awards and citations, including a Lannan Award for nonfiction in 2001 for this book.

Back in 1998, after President Bill Clinton signed the compromise welfare reform bill known as the Personal Responsibility and Work Opportunity Reconciliation Act of 1996, Ehrenreich wondered, "How, in particular, were the women about to enter the labor market going to make it on $6 or $7 an hour?" She said to her then editor, Lewis Lapham of Harper's, something she would subsequently have many opportunities to regret: "Someone ought to do the old-fashioned kind of journalism—you know, go out there and try it for themselves." She meant someone younger than herself, some hungry neophyte journalist with time on her hands. But Lapham pointed at her and said, "You."

And thus, at 57, she returned to work in the minimum wage world, determined to see what it was like to live in the 1990s unskilled labor market. Thus she came to write her best-known book, "Nickel and Dimed," a memoir of her three-month experiment, conducted between 1998 and 2000, of trying to survive on minimum wage.

Before going off on assignment, she set some rules intended to keep her admittedly artificial situation credible. First, she would not use any skills or connections derived from her education or career. Second, if she got job offers, she would always take the highest paying job and work hard at it. And third, since economics was the driver here, she'd take the cheapest accommodations she could find that were safe and private.

As a cover story she presented herself as a divorced homemaker reentering the workforce after many years. She obtained her jobs through community bulletin boards, newspaper want ads and, occasionally the Internet. She spent a month each in Key West, Florida, where she worked as a waitress; Portland, Maine, as a dietary aide in the Alzheimer's ward of a retirement home on weekends and as a cleaning woman for a housecleaning service during the week; and finally, in the Twin Cities region of Minnesota as a Wal-Mart clerk.

The most wickedly enjoyable parts of "Nickel and Dimed" come from the detailed, occasionally intimate, portraits of her co-workers and bosses, both their personalities and their life stories. Even though Ehrenreich was 57, she was fit, used to exercising and working out at gyms all her adult life. No way, however, was that preparation for even a week of waitressing in a busy Key West restaurant. The aches, pains, strains and sore feet that plague such work soon began to accumulate. Almost everyone she worked with was economically desperate and griping about it.

Her constant concern was money. It became impossible to make ends meet at minimum wage income. The major impediment was the cost of housing. In an ideal world housing costs might hover somewhere around 30 percent of one's take home pay, but the housing bubble of the millennium was building at that time and it was nearly impossible to find an apartment that fit a minimum wage earner's budget. Hence people either lived in their cars or mobile homes, with roommates, or in cheap motels where they paid daily or weekly rates. Diet soon became a matter of what kind of mac and cheese or soup, she'd be eating after work. Every penny counted. And there were never enough of them.

When it came out in 2001, Newsweek reviewed the book as "jarring," and "full of riveting grit." The New Yorker called it an "expose," that put "flesh and bones" on the abstractions of "living wages" and "affordable housing." To Ehrenreich's surprise, soon after the book was published in 2001, it became a best seller and a classroom staple in many colleges.

Today, in 2021 the working conditions of minimum wage earners have not changed much for the better. We are currently experiencing another housing market shortage, driving the prices of living space beyond the reach of the most vulnerable workers. The gap between economic classes continues to grow. The recent rejection by the U.S. Senate of a $15.00 minimum wage stands as another setback for "unskilled" workers (There are no such persons and no such thing as "unskilled" jobs, Ehrenreich says). Official counts of the unemployed and of persons living in poverty continue to be shaded downward by shifting definitions of the categories themselves. It's doubtful that, if the "Nickel and Dimed" experiment were to be repeated, the results would differ – even if our economy had not been given the vast downward tilt caused by the pandemic.

It's always a shame when you check back on a bad situation that was the subject of an exposé years ago and find that little, if anything, has changed. Barbara Ehrenreich's "Nickel and Dimed." however, stands as an American classic and remains fascinating and quite readable. The book gives faces to what would otherwise be dreary economical terms and statistics.