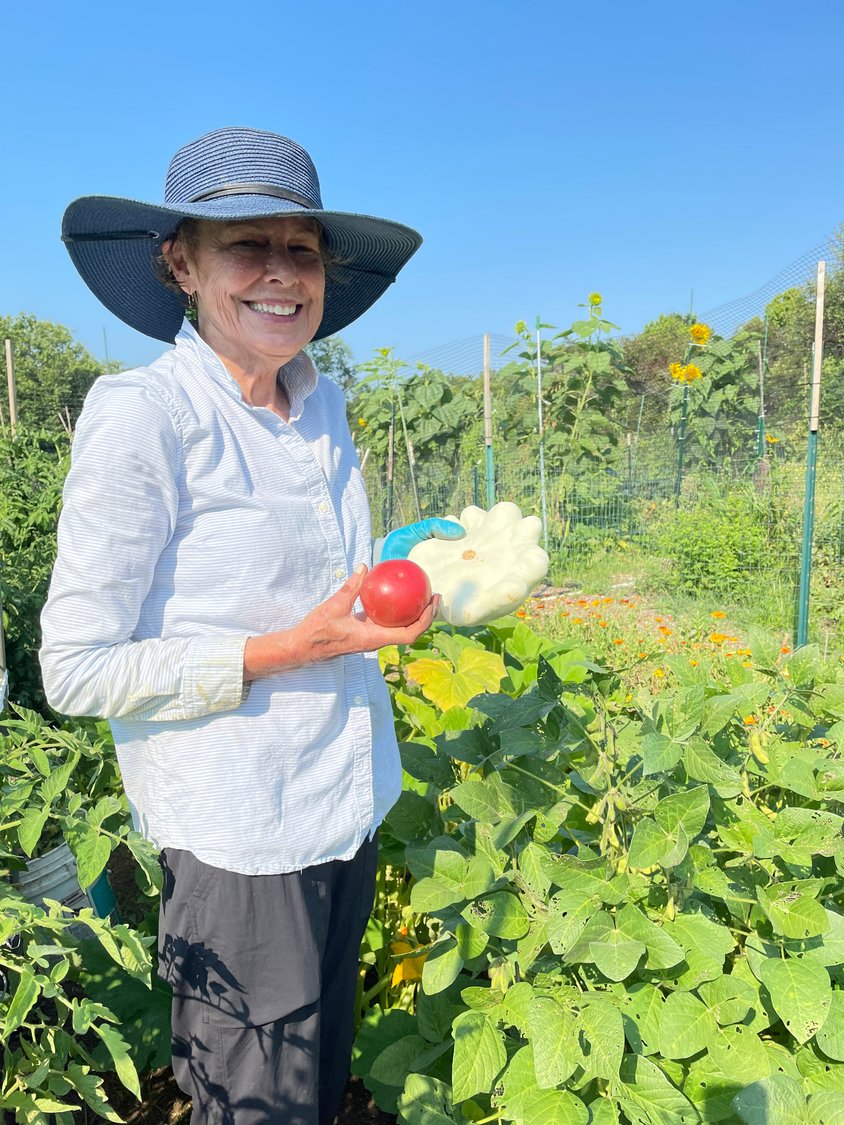 Diane Wells shows some of her produce in the community garden. 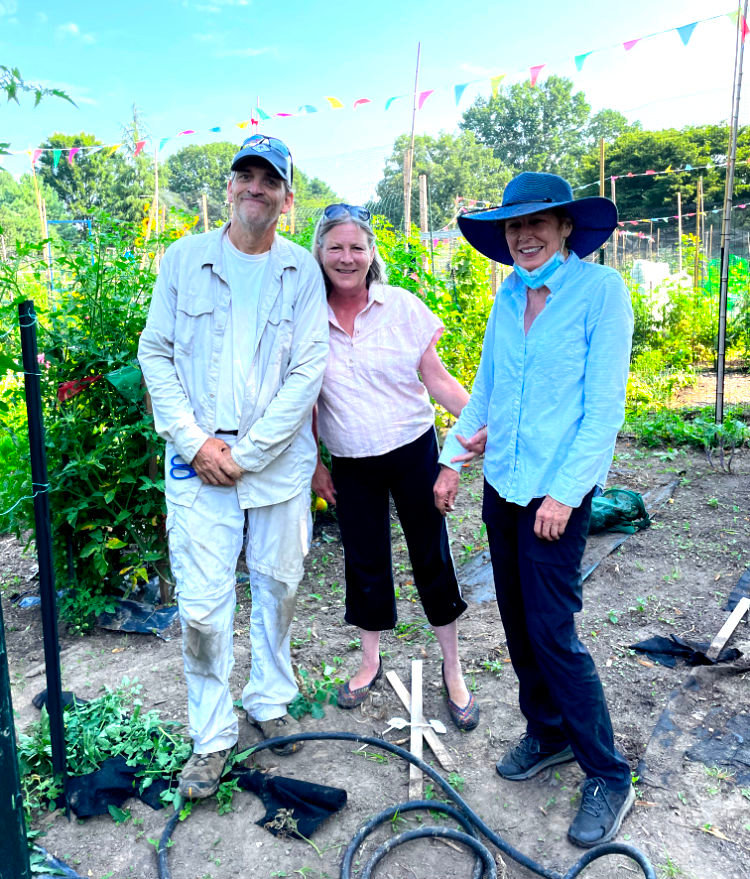 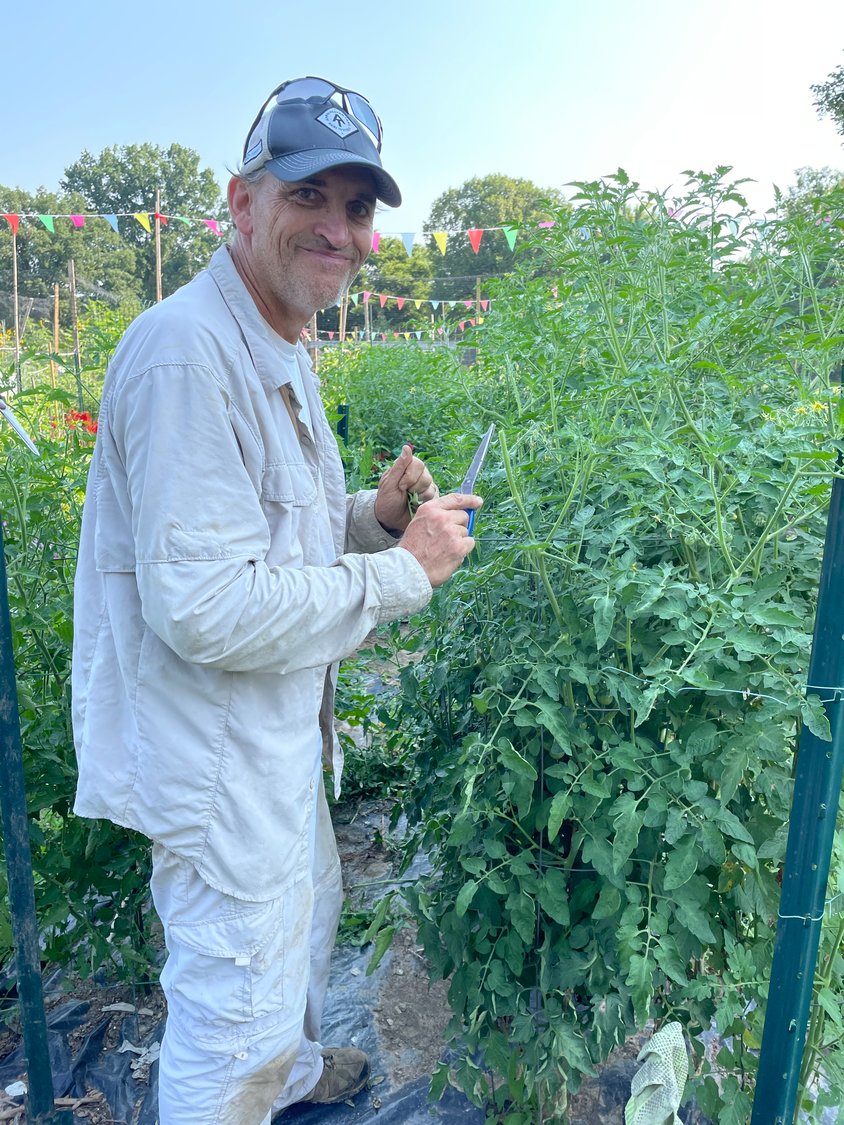 Graham Robb tends his tomatoes in the community garden. 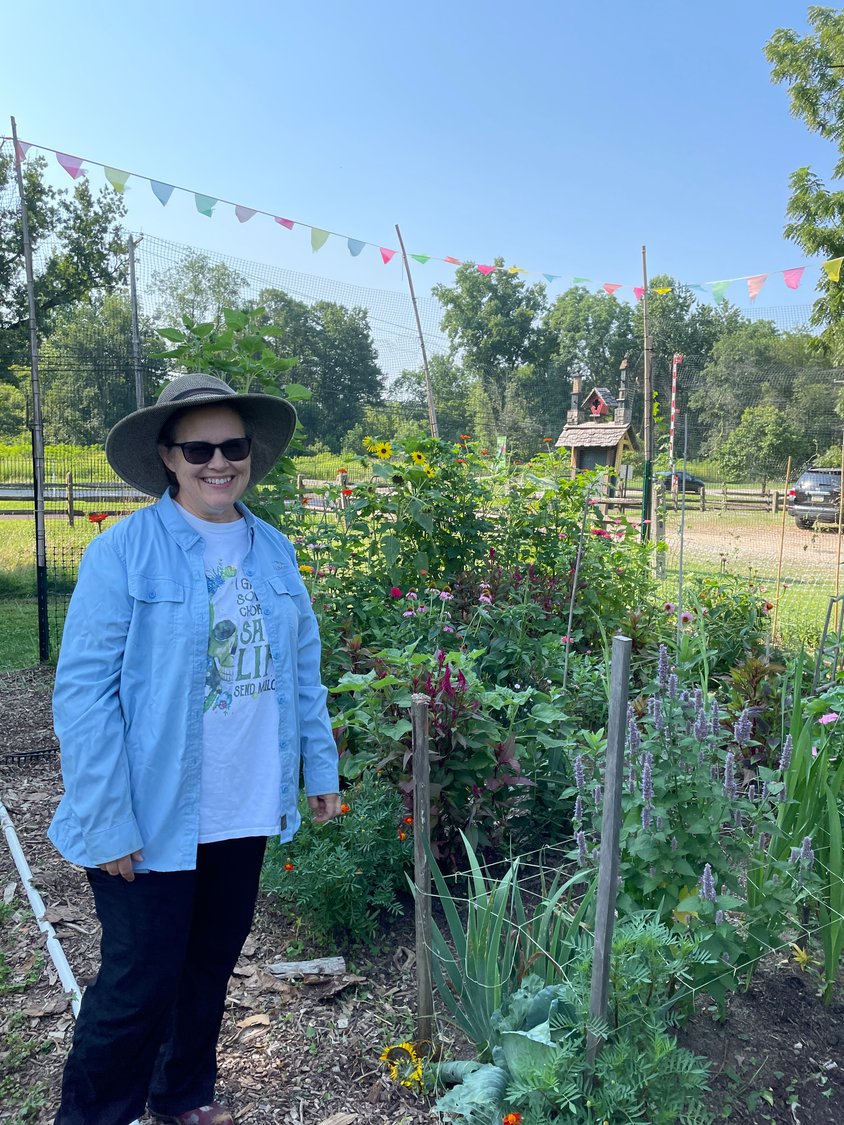 MeLinda Tatum Kaiser in her pollination garden.
Previous Next
Posted Wednesday, August 4, 2021 10:00 am
by April Lisante

Squash, peppers, enough tomatoes to make some serious gravy, and tons of greens are ripe for the picking in the 104 plots that comprise the community labor of love.

The plots are just $45 a year, if you are a member of the Morris Arboretum or the Chestnut Hill Community Association. Some of the 70 or so gardeners have been there for decades, while others are flexing their green thumbs for the first time.

Community Garden members Neenu and Vijay Bhargava, of Erdenheim, have a first-year garden and are already picking some of their Indian bitter gourds and bell peppers this week. Longtime gardener Diane Wells, who has planted 20 seasons in the garden, is seeing a bounty of tomatoes and edamame, her reward for a mid-March start to the tilling and seeding.

“I come really early in the morning and it’s peaceful and it’s quiet and I love to see things grow,” said Wells, her sunhat perched atop her head as she picked tomatoes on a recent Wednesday. “I have Swiss chard, edamame, squash, beets, kale, peppers.”

Each of the 15-by-20 plots is unique and prolific, especially this year, when interest in pandemic gardening reached a crescendo. One plot constructed by Wyndmoor member MeLinda Tatum Kaiser serves as a pollination garden, luring beneficial insects, another is a donation garden, growing food for local food banks. It sits across the street from the Morris Arboretum of the University of Pennsylvania and can be prone to the Wissahickon’s flooding whims. Fortunately, the garden totally escaped the apocalyptic hail storm that tore through Erdenheim and Flourtown July 21.

This week, during a visit there, I got a truly inspirational peek at what’s being harvested, and a glimpse into just how much of a community treasure this garden is for its members.

“Some people just walk through to see what is planted, and to ask questions,” said Community Garden board member Nancy Schaeffer. “It brings the community together and, particularly with Covid , the resurgence in the interest of gardening and people getting out to have the opportunity to socialize.”

East Mount Airy’s Graham Robb is one of the gardeners bringing people together socially in the garden for a good cause. Robb has been a member at the garden for about eight years, but about three years ago, he figured out a way to make bumper crops and excess produce a lot more meaningful.

“As a kid I always hated to see wasted food,” said Robb, outfitted in a baseball hat and wielding a clipper as he tended his tomato plants. “We are a country that grows way more food than we need but we have a lot of hungry people.”

So, for the past couple of summers, Robb has been organizing massive produce donations to the Whosoever Gospel Mission in Germantown. He collects what he’s grown, plus coolers full of produce left on site by gardeners with bumper crops. He also takes donations on his front porch from locals, then delivers everything to the nonprofit, which uses the fresh veggies to feed the homeless or those in need.

“The first year we had about 200 pounds…last summer we had 877 pounds and this year we are way ahead of pace at 525 pounds already,” said Robb, who took local gardening courses and occasionally consults Primex Garden Center in Glenside for advice. “I think it will be well over 1,000 pounds this year [in donations]. It’s nice to see the stuff go to good use.”

He collects so much produce this time of year he’s even added the Great Commission Church in West Oak Lane to the delivery schedule each week.

“You end up producing more than you can use,” he said. “You give it to neighbors, your mother, bring it in the office. But this donation project started small scale and has grown over time.”

The second half of the season starts now and for many of the gardeners who tend their beloved plots, the season doesn’t truly end until November, when the frost covers finally go on the beds.

“I’m already seeing this week the first cherry tomatoes, beans started a week or two ago, cucumbers,” he said. “There is more weight [to the produce] the second half of the season.”

The covers “give you a microclimate,” according to Wells, and they protect the plots all winter from deer and weather. One mild season, the covers didn’t go on until December, Schaeffer recalled.

But it’s all worth it in the end.

“It’s a lot of chatting back and forth like ‘What are you growing? And how do you do this?’,” said 20-year member Sharon Doerner. “It’s really amazing.”