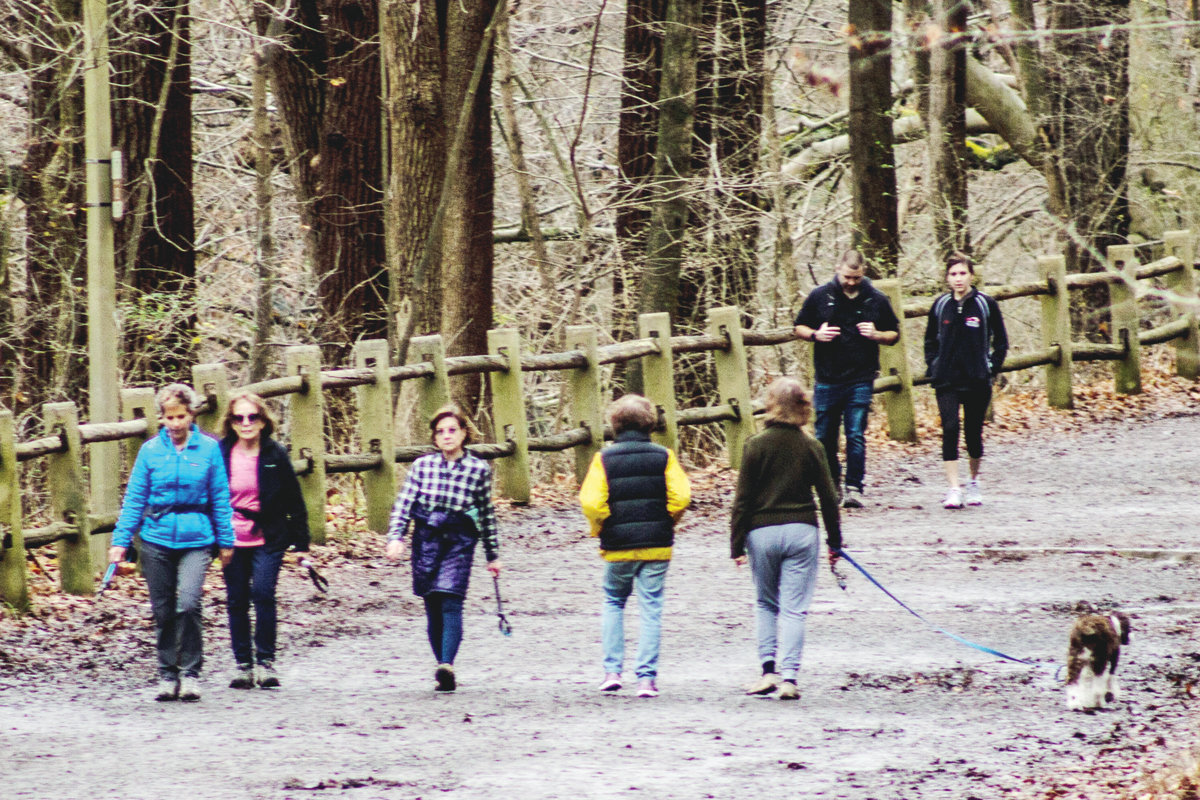 After a rainy New Year’s Day, many of the people who came out to enjoy the Wissahickon trails on Sunday, Jan. 2, said one of the ways they plan to deal with the ups and downs of COVID in 2022 is to get outside and enjoy nature. 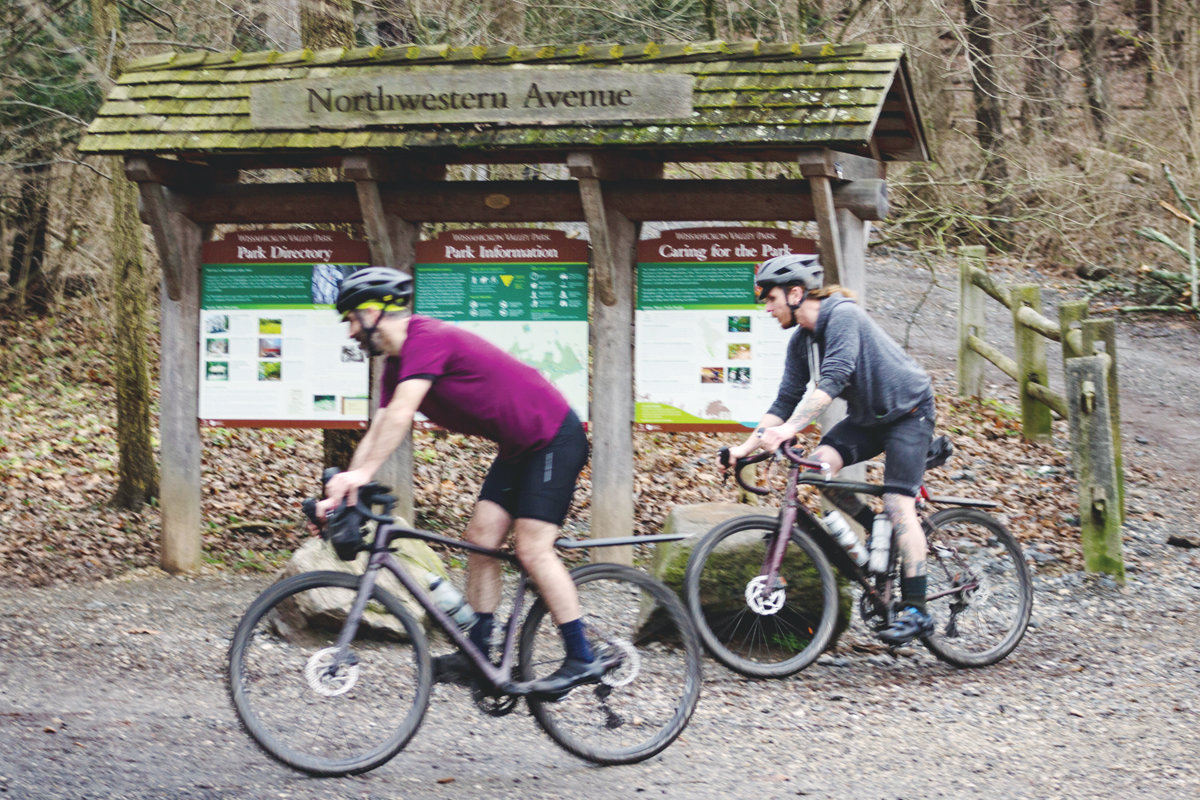 Locals say they are dealing with COVID scares by getting outside to enjoy fresh air and exercise.
Previous Next
Posted Thursday, January 6, 2022 12:00 am
by Tom Beck and Carla Robinson

“We have many patients in the ICU with what is most likely the Omicron variant,” said Dr. John Cacciamani, CEO and President of Chestnut Hill Hospital. “A large majority are not vaccinated. I cannot stress enough that Omicron is deadly, especially for patients who are older, immunocompromised or have other conditions that put them at risk. I strongly encourage vaccination. It is still very important and will remain so for some time.”

As hospitals near the 1,000 bed threshold, said Jim Garrow, spokesman for the city’s health department, “city hospitals are reaching a crisis point.”

“We are extremely worried about capacity at our hospitals at this time,” said Garrow. “Once you get to the point where hospitals are overwhelmed, our concern is that care becomes a challenge for people who have non-COVID health problems, like heart attacks.”

While hospitalizations are rising, the rate of infection appears to be rising much faster. According to citywide data, the percentage of COVID tests that turn out to be positive has gone from a relatively stable number of slightly less than five percent over much of the summer and early fall up to 20 percent on New Year’s Eve. As of Monday, it was 38 percent.

According to Garrow, health experts use the positivity rate to estimate how quickly the virus is spreading rather than actual case counts gathered from hospitals, because many people who get sick do not become seriously ill and never get tested.

“We 100 percent know that we are missing cases,” Garrow said.

Chestnut Hill, and to some extent Northwest Philadelphia in general, seems to be doing better in terms of case positivity than the rest of the city, according to city data, despite the fact vaccination rates don't seem to be any higher here than they are elsewhere in the city.

The positivity rate for the 19118 zip code, according to city COVID data, is 19.6 percent as of Tuesday morning. This comes despite the fact that the vaccination rate for the zip code is 6,450 per 10,000 people, which is slightly below average for the city. In the four zip codes that comprise South Philadelphia, on both sides of Broad Street, that number is in the 8,000s, 9,000s. And in the 19102 zip code, which covers a narrow strip of Center City on the west side of Broad Street from Vine Street down to Lombard Street, it is more than 10,000.

“I couldn’t be sure about the root cause for lower positivity rates” in Chestnut Hill, said Cacciamani. “I do see many people in the community taking precautions such as wearing masks and maintaining social distance. We also have great access to outdoor spaces for safe socialization. Perhaps the penetration for the Covid booster is also higher in Northwest Philadelphia.”

According to Garrow, Philadelphia’s overall vaccination rate of 77.3 percent is among the highest in the country. Even so, he said, it’s not enough to keep this variant from filling city hospitals.

“If everyone were vaccinated and boosted we would see hospitalizations drop precipitously,” he said.

“It’s not just a Philadelphia thing,” said Garrow. “There’s a lack of testing supplies and staff is depleted - the healthcare industry is losing staff left, right and center. Labs are getting overwhelmed.”

Within the last two weeks, he said, “The White house has bought all of them, so you can’t really buy them anywhere. We can’t even buy them.”

As a result, he said, the city’s health department is advising people who feel they may have COVID to assume that they do.

“People who are feeling symptoms, or who have been exposed to someone who is positive, should just stay home and rest,” he said. “If folks really do feel the need to get tested, they can go to Phila.gov/testing to find the closest site, and if they can make an appointment that’s even better.”

The only treatment they are recommending is plenty of rest, fluids, and either tylenol or ibuprofen for headache or fever.

“But the very first thing they should do is head into a bedroom and shut the door,” he said. “And if there is more than one bathroom in the house, try to isolate one for the sick person to use.”

“So if you were exposed to anyone who had it around Christmas, you’d be feeling symptoms right now.”

Perhaps some good news in all this rapid spread is that Omicron, while it is much more contagious than previous variants, also produces less severe disease.

And according to Ciaccamani, it may eventually take over the Delta variant, which typically makes people much sicker.

“The tendency is for a new variant to take over the population and push the other variant out,” Ciaccamani told the Local. But it’s too soon to say whether that’s the case with Omicron, he warned.

“I have not seen this data for Omicron yet,” he said. “Time will tell.”