The majority of the community’s concerns were about the bottleneck on Allens Lane outside the Henry H. Houston Elementary School during morning drop-off and afternoon pickup times. The extra traffic raises concerns about children trying to cross the street or exit a vehicle.
Walt Maguire 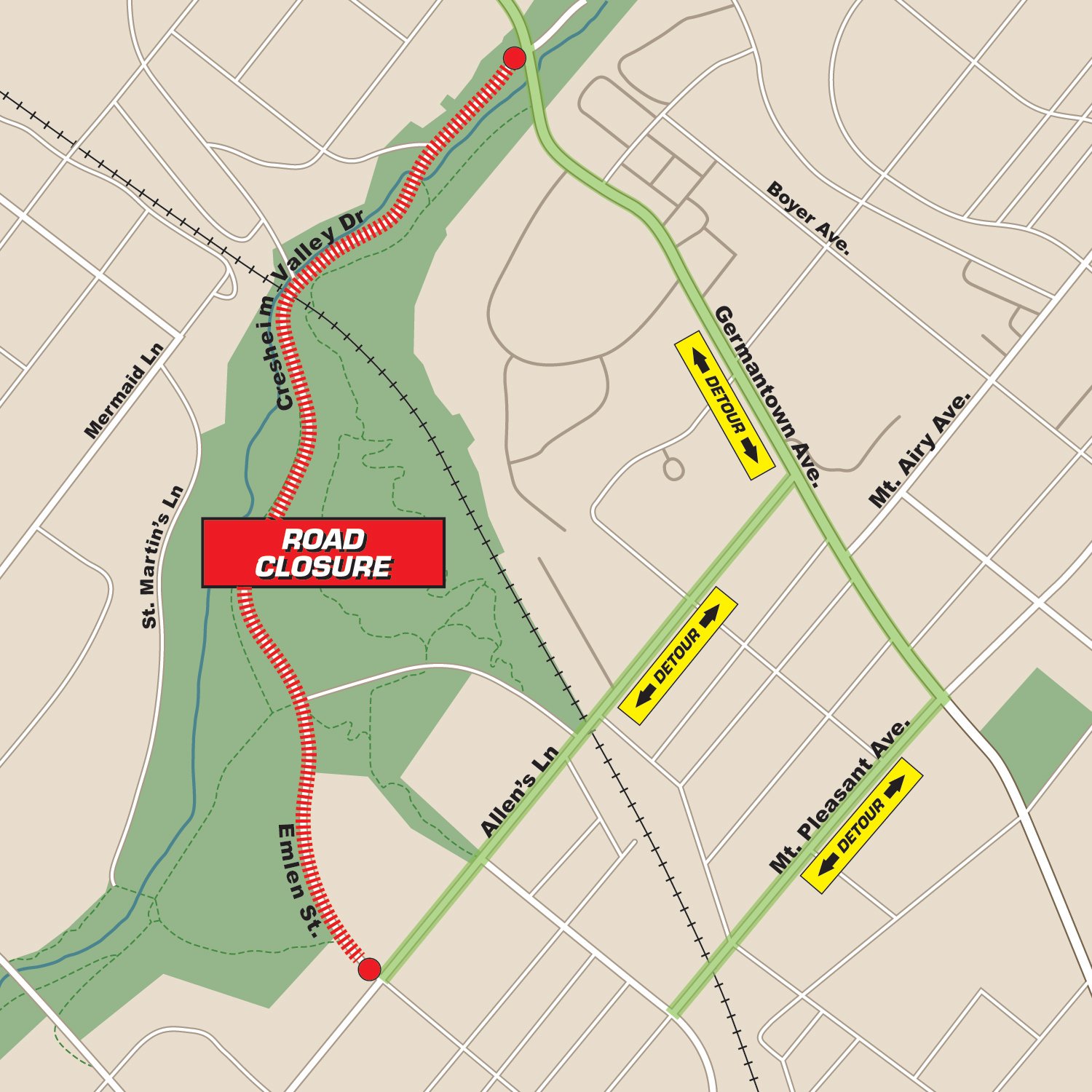 Cresheim Valley Drive will be closed to traffic from Germantown Ave. to Emlen and Allens Lane.
Rush Kreshman, Chestnut Hill Local
Previous Next
Posted Wednesday, December 22, 2021 5:59 am
by Walt Maguire

The first part of the meeting was an update on the water main break the day before. A major feed pipe near Cherokee Street and Hartwell Lane broke shortly before 5 a.m. Monday, Dec. 13, cutting off customers in Chestnut Hill, Mt. Airy, West Oak Lane and Roxborough and resulting in reduced water pressure or no pressure at all. The break was detected shortly before 5 a.m., with many residents reported pressure returning by 9:30 a.m. PWD spokesman John DiGiulio said the department “worked through the day and through the night yesterday to make sure we restored water service to everyone. And we hope that the impact was not felt too terribly.”

PWD Commissioner Randy Hayman added that the break was unrelated to the project on Cresheim Valley Drive.  . This break happened in a wooded area, not at a downtown intersection, so there was no visual report to pinpoint the problem immediately, but crews still arrived and set to work within the hour.

DiGiulio then gave an update on the Cresheim Valley Drive project, which is on schedule. The chief concern for the thirty community members on the call, however, was road safety. The construction detour resulted in most traffic being diverted onto McCallum Street or Germantown Avenue with a large number of cars going to Allens Lane as they reach the end of Lincoln Drive.

Of particular concern was the bottleneck on Allens Lane outside the Henry H. Houston Elementary School during morning drop-off and afternoon pickup times. This stretch between Lincoln Drive and Germantown Avenue is heavily trafficked during the school year, as parents double-park and school buses pass through, but with the extra cars there have been concerns about the safety of children trying to cross the street or exit a vehicle. Nearby resident Alison Cohen described the daily scene as a zoo.

“Kids are almost getting nailed, every single day,” Cohen said. “I think there needs to be engagement and evaluation, and it needs to happen quickly, for the rest of this school year.”

“As you may be aware, we have requested police presence along Allens Lane at Henry Houston Elementary to ensure student safety at pickup and drop off times,” said DiGiulio in response, “The school’s early dismissal schedule was also provided to our construction staff, and made its way over to the police department as well. We’re cautiously optimistic that no safety incidents have been reported today.”

He acknowledged that the police presence has been inconsistent, and that they were working to improve that. “The PWD construction staff is staying in regular correspondence with school personnel.”

Steve Lorenz, the chief highway engineer for the city’s streets department, said they are considering additional stop signs or speed bumps for that section of road but noted the lane is a state highway and so all changes must be in coordination with PennDOT.

Lorenz added that when Cresheim Valley Drive reopens in the spring it should be a safer drive for motorists. The drive is currently narrow with several curves that obscure oncoming traffic. The Streets Department is making plans to make that stretch safer with more reflectors, possible rumble strips and an extended guardrail. Those plans have not been finalized.

Councilwoman Cindy Bass joined the call later, coming in from another meeting.

Maps and updates will be posted in the Local and on PWD’s website at water.phila.gov/projects/all/p41132/