Chestnut Hill College celebrated its 95th Annual Commencement ceremony for students in the School of Undergraduate Studies and students in the Accelerated Adult Degree Program on Saturday. 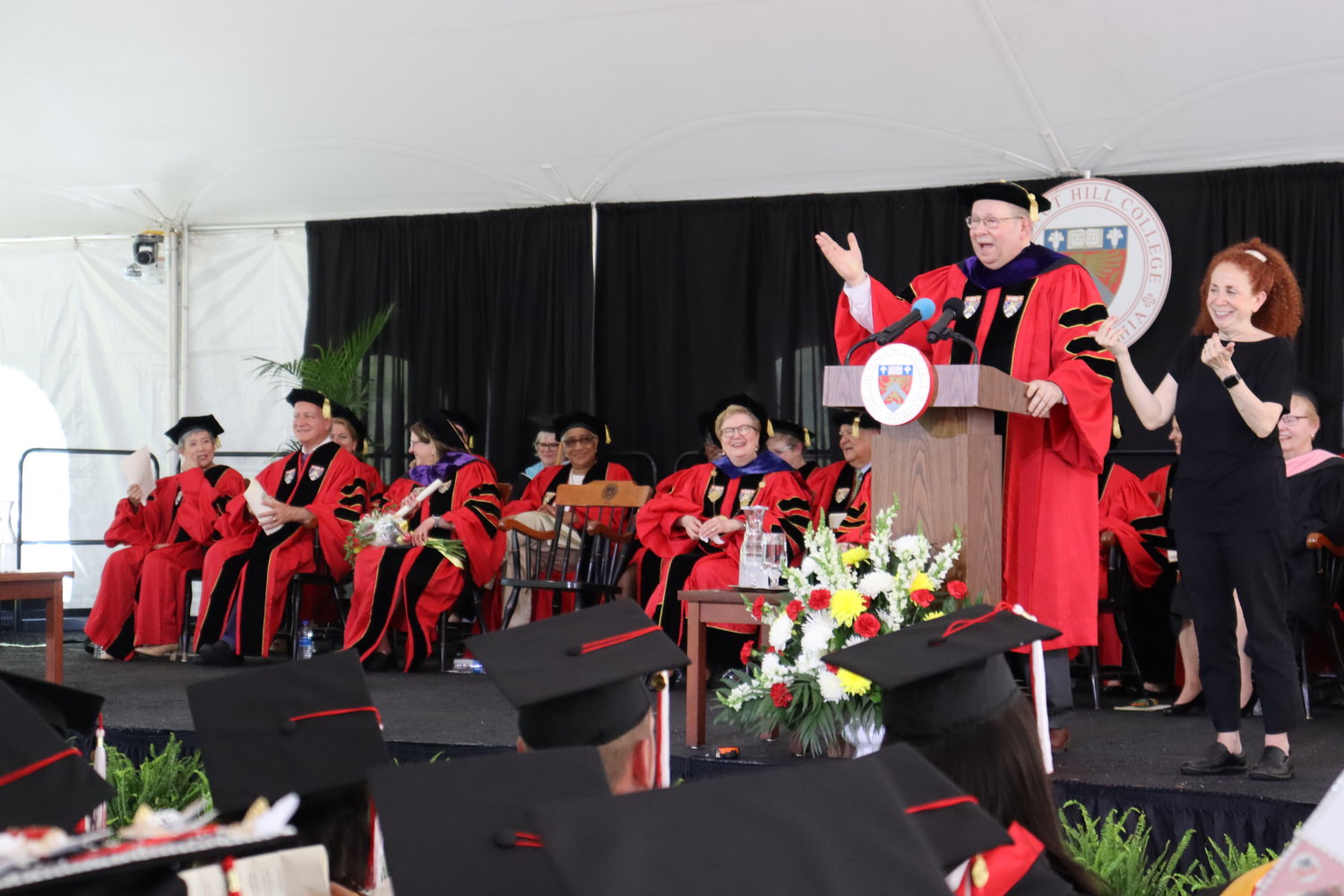 Chestnut Hill College celebrated its 95th Annual Commencement ceremony for students in the School of Undergraduate Studies and students in the Accelerated Adult Degree Program on Saturday with an address by U.S. Ambassador to Canada, David L. Cohen.

Cohen, who served as chief of staff to former Mayor Ed Rendell, played a central role in helping to save the city from bankruptcy during that administration, and tackled such systemic issues as budgetary and fiscal sustainability and economic development. His role in that era was chronicled in Buzz Bissinger’s book “A Prayer for the City.”

Cohen told the students he sees the “enormous challenges” that await them - including the impact of a “once in a generation pandemic;”  a political system that “has never been more divided” and “an illegal, unjustified and horrific war.”

“We are also experiencing threats to democracy created by populist and extremist movements and fueled by disinformation on social media,” he said. “Yet despite all this, I retain my optimism for the future of our city and country, for the future of civil discourse over insults and hate speech, and for the ultimate victory of democracy over autocracy.

“As the United States ambassador to Canada, I am asked all the time by Canadians why I maintain that optimistic perspective. My consistent answer is all of you. It's the young people of America in whom I am vesting my confidence…In all of you, I see a bright and prosperous future.”

CHC president Sister Carol Jean Vale thanked Cohen for his commencement speech and also for being “a longtime friend of the college.”

“Over the years, he has always been available to offer advice and his insights on matters and issues of importance,” she said. “Both he and his wife, Rhonda, are prominent Philadelphians who have made a positive difference in many lives. It is our honor to recognize them both for the many ways they have used their expertise and influence to improve the city where we live.”

Cohen, meanwhile, had much to say on the subject of Vale, who is currently serving her final year as president of the college.

“This institution might not be here without her, at least not in its current outstanding form,” he said. “I first met her in 1992 as she was assuming the presidency of the college….I rapidly learned something that business leaders, alumni and elected officials in Washington, Harrisburg and Philadelphia all know, and that most of you have probably experienced: it's just not possible to say no to Sister Carol.

“My first taste of that was to accept Sister Carol's invitation to join the Chestnut Hill College Board of Directors. I couldn't understand why this Sister of Saint Joseph would want a white, Jewish male on her board of a Catholic, all-girls college,” he continued.

She told him she wanted to make what was then a women’s college a co-educational institution.

“To do that, she wanted and needed some new voices on her board, either to challenge the assumption that going to co-ed was necessary or to help her push it across the finish line.

“Of course, the rest is history,” he continued. “The dangerous drop in enrollment has been more than reversed. The school is financially healthy, history has been rewritten, and Sister Carol has led that rewriting of history and other fundamental changes during her 30 years as president.”

She also expanded the campus by acquiring the SugarLoaf estate, led the effort to secure NCAA Division II athletic status and added the Accelerated Adult Degree Program, he said.

“And she has ensured the recruitment of a truly diverse student body, now about half men and half women, and over 40% African American and Hispanic, pairing that with a commitment to raise the financial aid resources necessary to assure that a Chestnut Hill College education is financially affordable to all,” he said.

Following his time as Rendell’s chief of staff, Cohen served as a partner and chairman of Ballard Spahr law firm before being appointed as senior executive vice president at Comcast Corporation. He assumed the role of Comcast CEO in January 2020.

In November 2021, Cohen was appointed by President Biden and sworn in by Vice President Kamala Harris as the U.S. ambassador to Canada.

He has served on numerous boards and commissions (also with numerous directorships and chairships) including 20 years on the board of trustees of the University of Pennsylvania, twelve of which he served as board chair. He has also received numerous awards for his civic and philanthropic endeavors, including the American Red Cross Citizen of the Year, MS Society Hope Award, National Urban League of Philadelphia Business Leader of the Year, William Way Community Center Amicus in Res Award, Spirit of Asian American Award, and Jewish National Fund Tree of Life Award.