Despite forfeits, a respectable outcome for GA wrestlers

When a wrestling team has no one participating in six of the 14 weight classes in a dual meet, the result is usually a lopsided loss. That's not what happened to Germantown Academy last Friday.

Despite forfeits, a respectable outcome for GA wrestlers 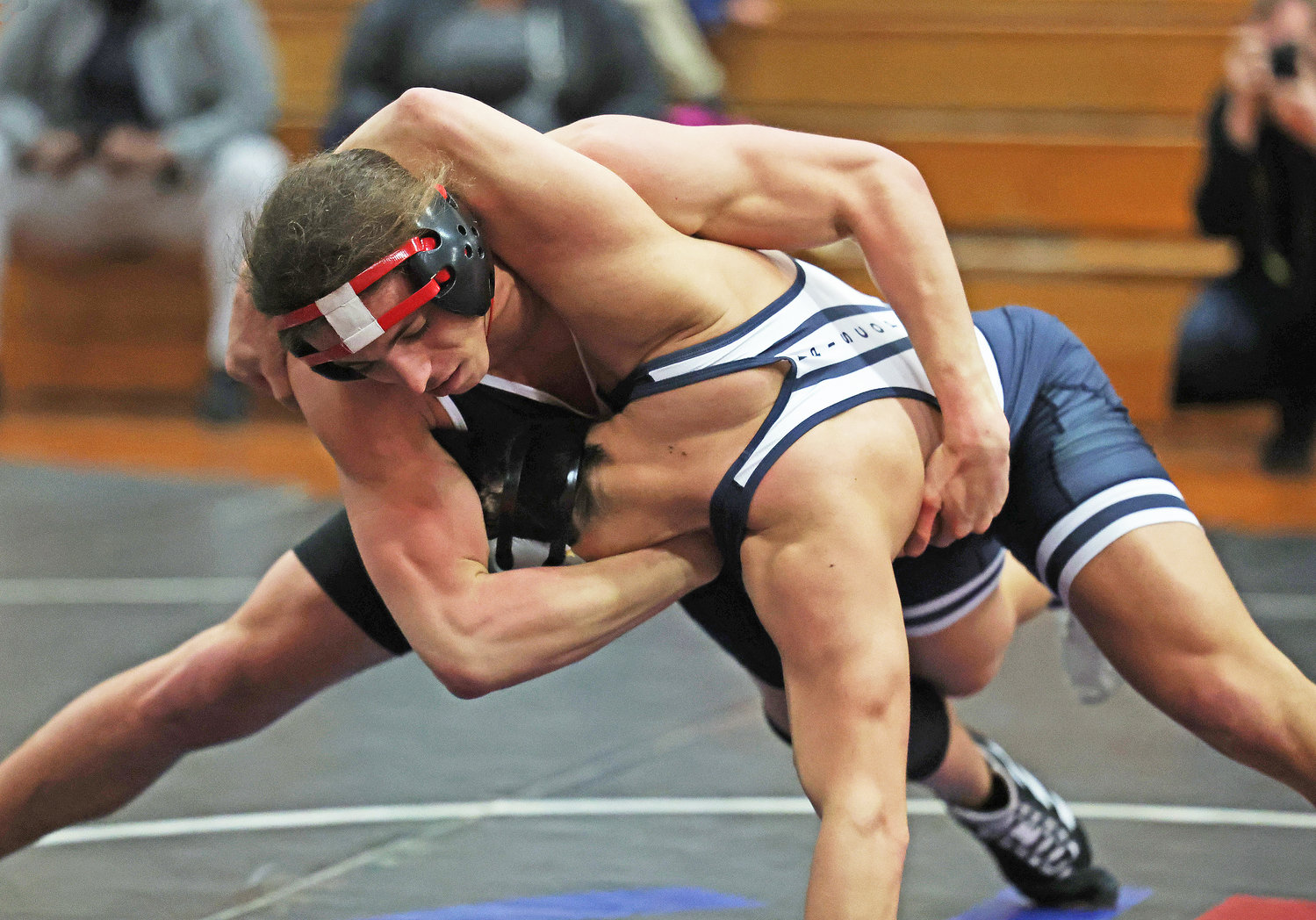 In the 150 lb. class, GA senior Jacob Sasson (top) ended his match with a pin late in the first period.
Photo by Tom Utescher 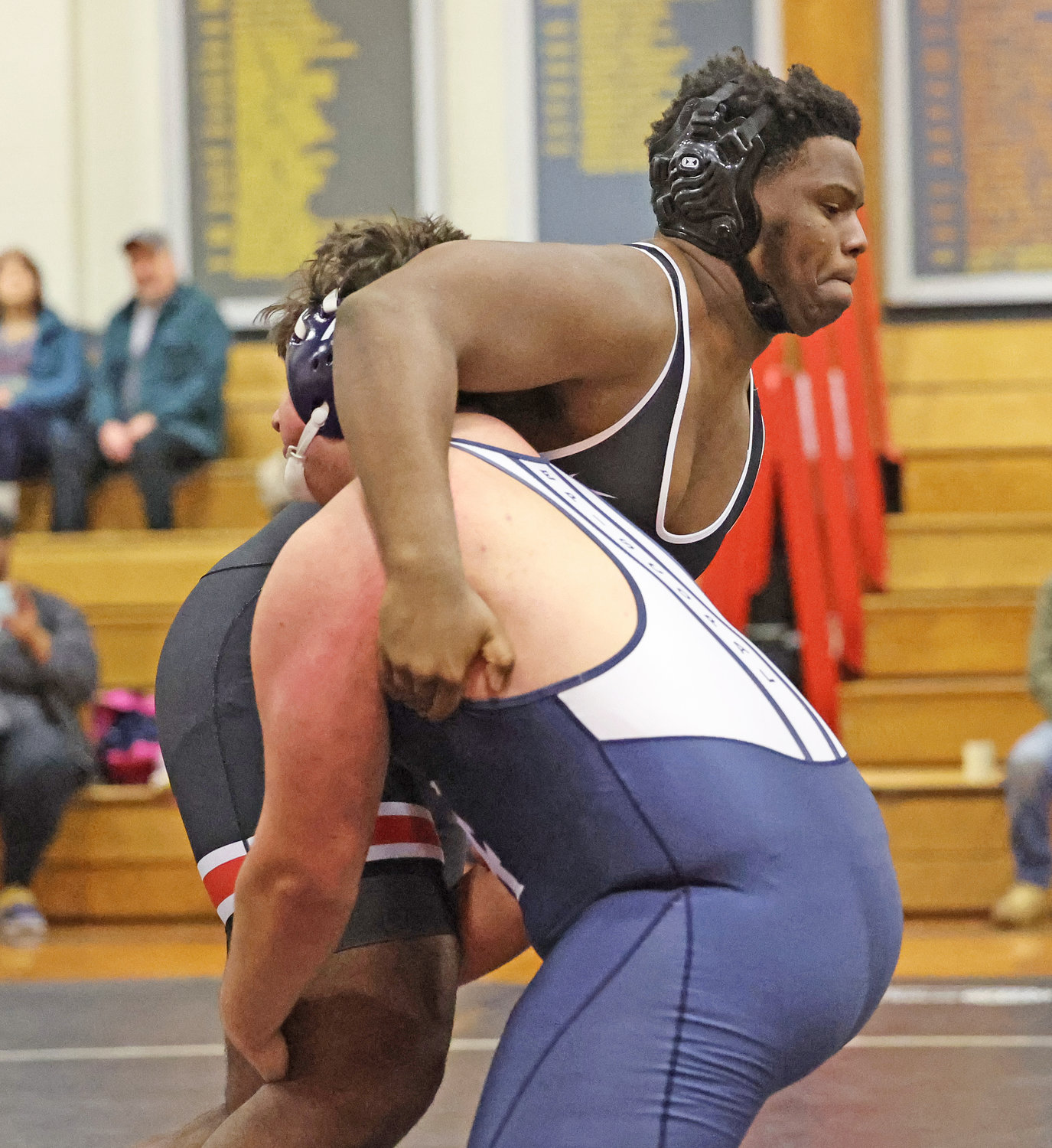 When a wrestling team has no one participating in six of the 14 weight classes in a dual meet, the result is usually a lopsided loss. That's not what happened to Germantown Academy last Friday, when the Patriots hosted their Inter-Ac League opener against Episcopal Academy.

To begin with, the visiting Churchmen had some gaps in their line-up, as well. Like GA, they had no entry in the 165 lb. class, and they forfeited to GA at 120 and 126 lbs.

The Patriots ended up winning in four of the six weight categories where actual wrestling occurred, and in the end they lost to EA in the meet by a score of 42-33.

For various reasons, the Germantown Academy wrestling program was decimated during the height of the COVID-19 pandemic. The Patriots are now methodically rebuilding under second-year head coach John Staudenmayer, who would rather work with a reduced roster for the time being than rush young wrestlers onto the mat before they're ready. He said he has several promising grapplers in the middle school ranks, and also some incoming talent arriving at GA.

A scholastic state champion during his 43-0 senior season at Plymouth Whitemarsh High School, Staudenmayer went on to wrestle for the University of North Carolina. He has developed extensive coaching experience working at the high school, college, and club levels.

As last Friday's first Inter-Ac dual meet got underway with the 106 lb. bout, Episcopal freshman Jack Signor accumulated back points to help build an 8-0 lead before pinning Patriots sophomore Jhais Williams with 61 seconds remaining in the first period. GA evened up the meet score at 6-6 with a pin at 113 lbs., where freshman Jack Baron quickly took down Episcopal sophomore Danny Hopkins and then pinned him the first time he turned him, with 39 seconds elapsed.

Germantown then went up 18-6 in the team scoring as sophomore Robert Leeds and freshman Eric Catenacci accepted Episcopal forfeits at 120 and 126 lbs. The Patriots then handed six points back, offering no one to oppose Fernando Loor of the Churchmen in the 132 lb. class.

At 138, GA sophomore Gavriel Sabag pinned visiting junior Zane Miller-Swatski with 1:05 remaining in the first period. The next match, involving a pair of freshmen at 144 lbs., was the only one to go the distance in this meet.

The first period ended 2-2 after Jack Breme of the Patriots scored a takedown and Episcopal's Spencer Schuh staged an escape. The only scoring in the second round resulted in three back points for Breme, who now led 5-2. Starting on top for the third frame, EA's Schuh was penalized one point for improper positioning. Breme then reversed from the bottom, winning the bout on points, 8-2.

Next up for the Pats at 150 lbs. was Jacob Sasson, a senior who is a team captain along with Leeds, the 120-pounder. Facing a fellow senior in Will Hohn of the Churchmen, Sasson scored a takedown and three back points before pinning his rival with nine seconds left in the first period.

This gave Germantown Academy the largest lead of the day, 33-12, but now a long string of forfeits began. The Patriots forfeited the 157 lb. class to visitor Jack Bonner, then the meet score remained 33-18 as neither school chose to contest the 165 lb. weight class.

Without anyone breaking a sweat, the Churchmen vaulted into the lead in the team scoring, 36-33, as Germantown did not offer any opposition to EA's Akira Heath (175 lbs.), Michael Minicozzi (190) and Vern Holley (215).

Both teams had a 285 lb. entry, though. Episcopal had an advantage in experience as senior Victor Coleman faced Patriots freshman Greg Thomas. After the two heavyweights locked up for awhile on their feet, Coleman was able to engineer a takedown, and he secured a pin with 25 seconds remaining in the opening period.

In view of the forfeits in a number of weight classes, the Patriots acquitted themselves well overall as Episcopal emerged with a 42-33 victory.