I was at work one day in 2001 when my wife phoned and said I should come home. An airplane had crashed into the World Trade Tower in New York. Something was going on. It didn't seem like an accident. … 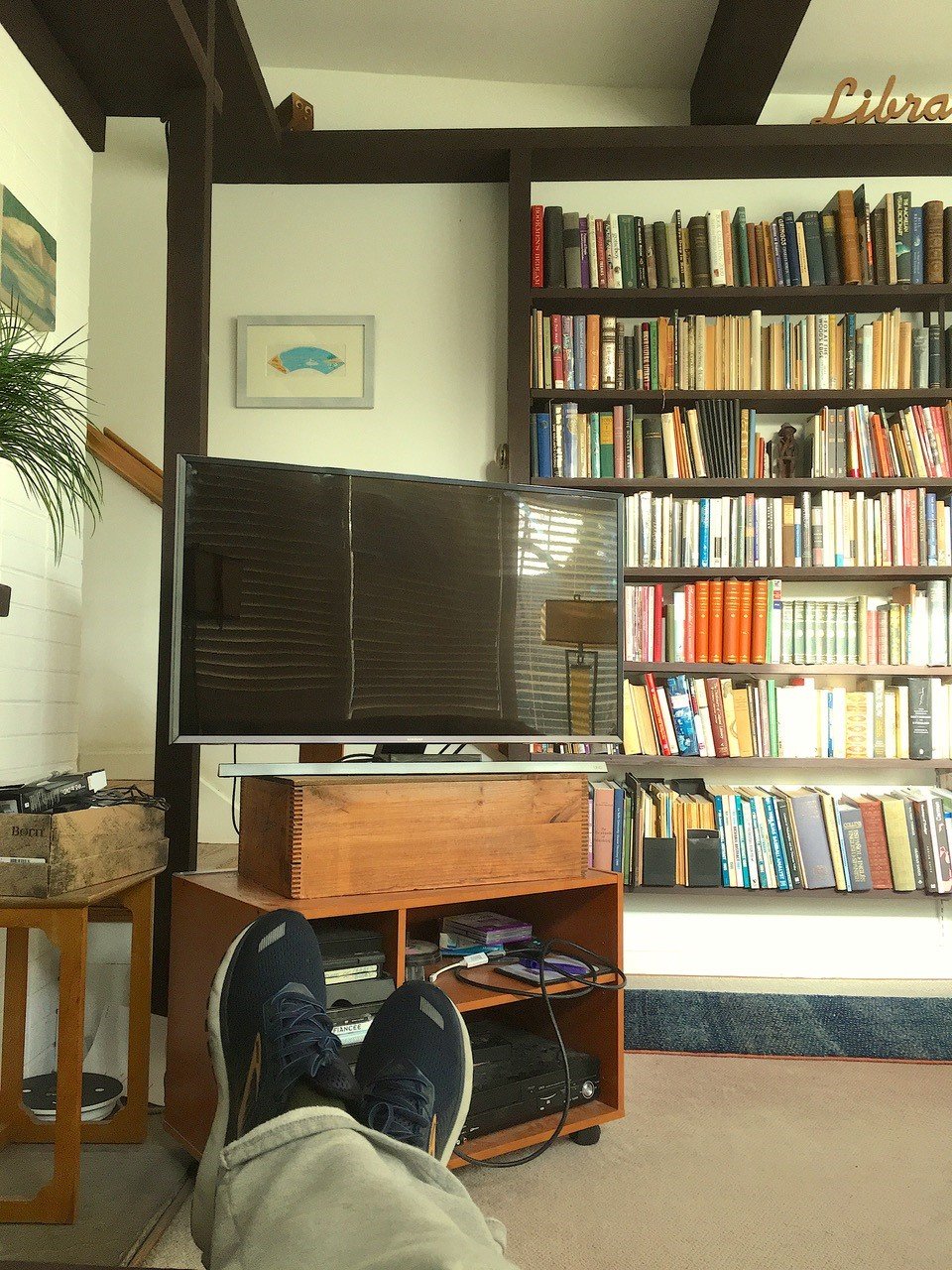 This cable news junky can finally turn off the TV.
Posted Thursday, November 12, 2020 11:39 am
by Hugh Gilmore

I was at work one day in 2001 when my wife phoned and said I should come home. An airplane had crashed into the World Trade Tower in New York. Something was going on. It didn't seem like an accident. I drove home in time to see a second plane crash into the second tower. In those pre-Internet days, television was the only source of visualized news. A creepy, jumpy fear had invaded America. "The Arabs are coming! The Arabs are coming – and they hate us!" That was the basic undertone. I needed to watch as much as I could in order to learn what had happened. Eventually, the news cycle on that story wound down and I returned to life as usual

In 2003 the younger George Bush ordered the invasion of Iraq. That too necessitated evening news watching for a while, but the war was remote and Americans seemed, officially at least, safe in their beds at night. Soon that story took less and less time to cover.

In 2006 Hurricane Katrina came to the Gulf Coast and nearly destroyed New Orleans. The TV networks covered the story en masse and the story needed watching. But the sight of our fellow citizens, most of them African American, forced to seek comfort with little governmental aid, sitting on bridges in searing heat with little shade or water, was sad and disturbing. I watched in shame, feeling repelled that our Republican, white leaders behaved so indifferently to the plight of our fellow Americans. It was a disaster definitely made for TV, but the coverage trickled and died. Life returned to its usual pace.

Since January 20, 2017, however, – Trump's inauguration Day – I have watched television news nearly every day – for four years! Usually for two hours, but at times up to six.

I have to say here that before this sick habit began to be a habit, I hardly ever watched the "evening news." I read books instead. The local network stations are lighter than cotton candy. "If it bleeds, it leads." Five minutes of weather hype. Announcers pretending to be your friend and neighbor. And the major network stations are just as superficial; they simply smile less often. I got my news from the Internet, as it came in. That was then.

But Trump. This Trump guy bore watching. He had an absolute command of how to get people to want to hear what he'd say next. His tweets, releases, press conferences, actions, pardons, rudeness, legislative sessions, firings, pardonings, lies, bullying, uninformed opinions, disregard for the dignity of other people and other nations...on and on...really rocked the American boat. He was the big clumsy guy standing on the bow thwart of the national canoe, waving his oar like a saber. It always felt like it was only a matter of time till we all tipped over. Daily anxiety, anger and frustration trailed in the wake of his antics. And viewer ratings rose. Perfect television, that guy and his demented telenovela.

I watched a lot of TV stations before I settled on CNN and MSNBC, both liberal stations. My friend, Greg, often told me I should watch the conservative Fox News because it's more important to know what the other side said. I tried. But I can only look at those snickering people for a minute before I feel disgusted by their fake sense of grievance. They carry themselves like the self-appointed cool kids running the high school TV station. I can only look at Tucker Carlson and laugh at his fake frowning-with-indignation furled eyebrows and angrily puckered lips and feel I'm watching an "Our Gang" comedy.

So, no, my wife, Janet, and I settled on Wolf Blitzer (respect him, but can't stand his shilling), Erin Burnett (like her anger but gag when she tries to put words in her interviewees' mouths) and Anderson Cooper... whose customary 10-minute essays are real gems of insightful eloquence. But these shows and those of the other stations always degenerated into pods of talking heads spinning out opinions ad nauseum. Behind it all, though, was the compulsive feeling that the hovering shadow of Trump and his crew required that I keep my eye on them.

I supplemented my addiction by going online and subscribing, (even paying for some) to sites such as The NY Times, The Atlantic, Harpers, Yahoo News, Google News, The Washington Post, The Wall Street Journal, the New Yorker, The Philadelphia Inquirer, Politico, Philadelphia Magazine, and of course, The Chestnut Hill Local. Sorry, no Breitbart.

Why did I give so much time and attention to this four-year slice of American history? I'm not sure. I think it's akin to the way Eagles fans feel when "the game is on." I, for one, never watch the game with others in the room. I don't like "watch parties" of anything I care about. I have to hear every word. See every play. Concentrate. Try to predict what's coming next. Rise, fall, rise again, sink again, but see the drama play out through the end. In the case of four years of the Trump administration, like every person I've talked to, I'm relieved that it's over. He's been stopped. "I couldn't take four more years of that. I don't know what I was gonna do if he won," said the young cashier at Wawa on Saturday. Disasters probably lay ahead if he were reelected. Worse than what we've endured. I'm hoping that after Big Red kicks and screams and pouts, and finally the swinging door hits him on the way out, the country can start to unite against our common problems.

On a more practical and pleasurable basis, I can now return to doing something I have always enjoyed tremendously, but have foolishly pushed aside in order to follow the White House follies: read books. I love books and reading. I have a stack waiting to go. And I have a bunch of time slots now open. For me, television news of Trump's shenanigans was truly an "Enemy of Reading."

Hugh Gilmore finished Carl Hiaasen's "Squeeze Me" during what would have been Prime Time on Sunday and is halfway through "Mad at the World," a biography of John Steinbeck.