First, they wanted to build a 55-unit senior housing apartment complex, then a 41-unit townhouse complex, then 36-units. Still the neighbors said no.  Now the company is opting for a behavioral  health facility – something they don’t need to get neighbors approval to build. 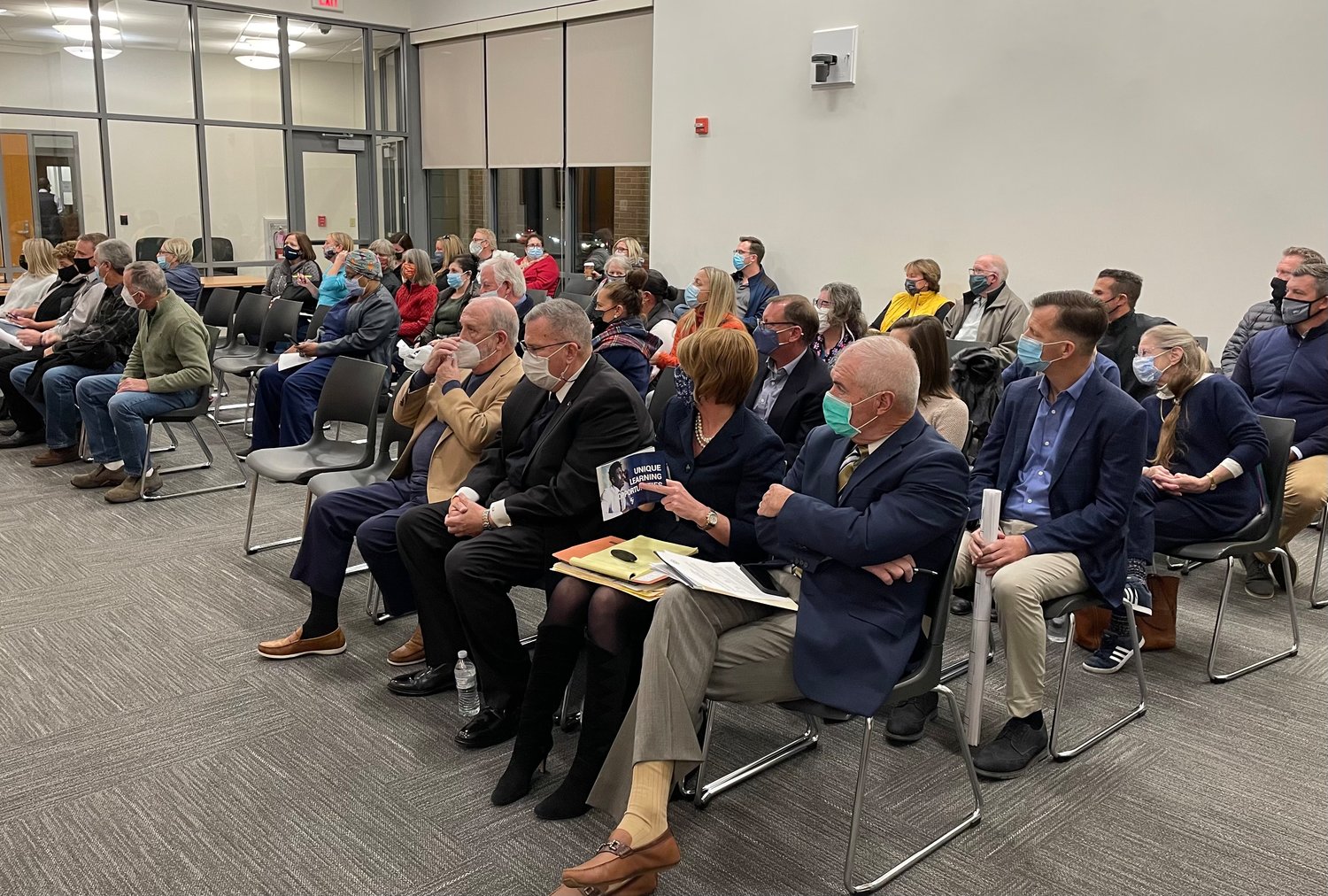 Neighbors are divided about what they want to see for development of Haws Lane.
Posted Thursday, November 25, 2021 6:00 am

Haws Lane development in a tight spot
by Betsy Wallace

A new chapter began in the on-going saga of what will happen to the 4.7 acre site at 380-402 Haws Lane in Springfield Township, the only parcel of open space left in the surrounding community, at an informal meeting at the Springfield Township Planning Commission held on Tuesday, Nov. 16.

Now, the company is opting for a behavioral  health facility - something they don’t need to get neighbors approval to build because the site is currently zoned for institutional use.

It’s a move that left some neighbors scrambling to put together plans to raise the money needed to buy the parcel outright, so the township can dedicate the land to open space, or figure out a compromise townhome plan that they could live with.

The Commission has been reviewing informal development sketches for the Haws Lane site in the last few months, most recently, a 36-unit Townhome plan presented at their September 7 meeting that about forty neighbors attended.  The owner, MEH, LLC, swiftly abandoned that plan six days later, however, because it was clear there was not enough community support for the idea.

Fast forward to November 9, MEH hosted  a “by invitation only” meeting with Haws Lane neighbors to discuss plans for a 30-unit townhome project, whereas, just 5 days earlier, MEH had asked the Township to present a new sketch plan for behavioral health facility at the Planning Commission’s November 16 meeting. Residents had already received notices about the planning commission meeting before November 9.  According to those who attended that private meeting, all neighbors were opposed to both plans, but felt somewhat pressured to consider the 30-unit townhome idea.

At the November 16 Planning Commission meeting, Brian Halligan, MEH owner and managing partner, spoke for Haven Behavioral Hospital of Philadelphia, a for-profit hospital located at 3300 Henry Avenue in East Falls, which did not send a representative to the meeting.  Halligan said that Haven, a potential buyer, is looking to move from its current facility in East Falls to Haws Lane.  They want to build a 70,000 square foot, three-story in-patient facility that can house eighty-eight mental health in-patients and provide 98 parking spaces.

Halligan asserted numerous times throughout the meeting that the Haven plan is a by-right plan - which means that because it complies with current zoning, the owner has the right to build it whether or not the neighbors approve.

Commissioner Robert Gutowski, who chaired the meeting, said that his overall view of the plan was that it “does not present well right now.”  Gutowski said that “there will be issues about the trees… you need more of a buffer along the front.  Locate some parking in the back.

“Reduce the number of parking spaces… Noise and light are big issues to deal with,” he said, adding that “there’s no public transit here. Operationally, how is Haven thinking people will get there when they have all kinds of public transit available at their Philly location right now?”

Halligan assured the commission that everything would be worked out in the details of the plan and added somewhat spontaneously that “it’s not like the patients get out and are running around.”

When it came to the public comment period, it became clear that Halligan could not address any of the neighbors’ questions about the level of care, whether there were locked wards, what type of mental health patient would be admitted to the facility and the hospital’s security plans.  He promised to get answers from Haven.

Richard Metz, an Erdenheim resident and a proponent of keeping the Haws Lane site an open space, heatedly called Halligan’s behavioral health facility plan “a sham,” asserting that it was meant to make the neighbors so fearful that they would agree to a townhome plan instead. (Metz now says that he feels what Halligan is doing is worse than a sham.  “It’s more like extortion and bullying because he is threatening the township’s children if the commissioners don’t approve his zoning variance”).

Halligan retorted that “This is as real as it gets.  Do I think it’s the best use?  I’ve been in front of the commission four times now for plans that all require an ordinance change and variance change. This is a by-right plan.

“This is the path that I’m forced to go down.  What happens is really up in the air.  This is moving forward.”  Halligan added that “I can’t keep submitting plans without any resolution. There’s been no support for building townhomes no matter the number of units.”

“We don’t aggressively look for things from the developers. We’re trying to follow the lead of the people who live here. The majority of people at those [prior] meetings were looking for a far less intense project than what Halligan says is feasible for him.  Not one person said that they liked 30-units.  Some emails are now saying they will like 30 units. First I’ve seen that.”

If the sixteen public comments at the November 16 meeting are any gauge of the entire Haws Lane community’s interest, all were opposed to the plan to build a Behavioral Health facility, some speakers were willing to consider a lower density townhome plan in lieu of an acute care behavioral health facility, and some supported keeping the site an open space, which would entail raising community funds to buy the site or getting the Township to commit to buying it at fair market value.

And there was one Haws Lane neighborhood speaker, Joan Parsons, who wanted Halligan’s very first proposal, an apartment building for residents over the age of 55. “Forty of our older residents didn’t want to leave our community when we could no longer live in our houses. We wanted to get into the 55-plus apartments. Other neighbors didn’t want that so it did not happen.”

Neighborhood in-fighting was on display at times in the meeting, requiring Commissioner Gutowski to use his gavel gently at one point. Part of the audience of neighbors reacted badly to other neighbors who stood up and supported Halligan as a good person.  A few speakers chastised the un-neighborliness of some email messages sent in the days leading up to the November 16 meeting.

In the end, the neighborhood is no closer to coming to a consensus about what they want than they were when the Local reported on the status of the Haws Lane site in September.

In the last few weeks, Richard Metz started organizing “The Friends of Harston Woods” for neighbors who want the site to remain an open space.  There are already 30 residents on his email list. At the Planning Commission meeting, a township resident who has an architectural background, offered to get more involved in working with the neighbors to negotiate a compromise on the 30-unit Townhome plan.

And then there are some who are looking at the bigger picture.  In an interview after the meeting, one of the speakers, Shantia McCoy-Jones, who lives close to the Haws Lane site, said that “the most important concern I have is that everyone involved in this decision, the township, the developer, the neighborhood, all consider the impact of the development on the community as a whole. Community impact is key.”

Meanwhile, Halligan says that he “doesn’t disagree that residential is better.  Thirty [townhome] units is a plan that I’m willing to do” but he will keep pursuing the “by-right” Haven facility plan until there is a solid alternative in hand.

The Board of Commissioners won’t decide on a plan that would require a change in the zoning ordinance when the neighbors themselves can’t agree on what’s best for their neighborhood.  A professionally facilitated neighborhood meeting convened for the purpose of identifying what neighbors realistically envision at the Haws Lane site might be a good idea right about now.

At the end of the meeting, Baird Standish, President of the Board of Commissioners, promised that neighbors could present their ideas for how to use the site at the Board’s December 6 workshop meeting.