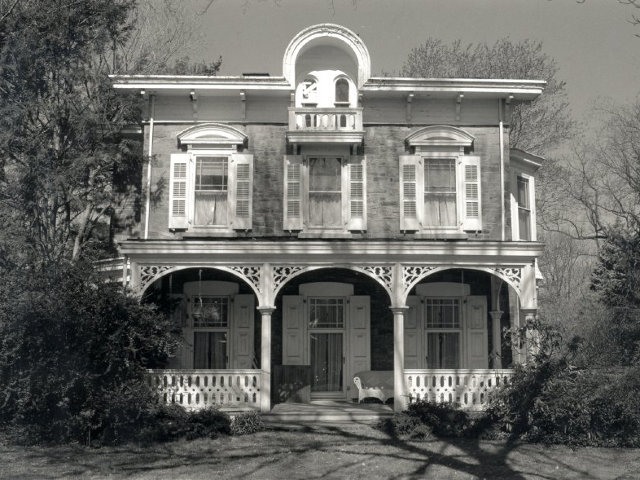 Summit Street, not surprisingly, is located at the highest elevation in Philadelphia: 446 feet above sea level. But today it may be better known as one of the most interesting and beautiful streets in Chestnut Hill.

Recognizing the appeal of the area, lawyer Samuel H. Austin purchased about 5.75 acres of land south of the station and laid out Summit Street from Bethlehem Pike to what is today’s Stenton Avenue. Austin sold off various large lots on both sides of the street, and construction of houses quickly followed. By 1876, the development of the street was nearly complete, with houses representing a wide range of Victorian-era architectural styles.

In addition to its convenient location near the railroad station, Summit Street, due to its higher elevation and superb views, was an ideal opportunity for well-to-do Philadelphians to exercise the mid-19th century’s romantic ideal of living close to nature and escaping the crowding and insalubrious conditions of urban life. This way of thinking has affected the development of the American suburb ever since.

For a long time, the architecture of the Victorian period was ignored, or even despised, because it was eclectic. It was not considered a “pure” style when compared to previous periods of western architectural history. With some exceptions, most architects of the Victorian age, both here and in Britain, dressed their buildings in a variety of neo-architectural styles: classical, Italianate, Gothic, etc., depending on the desire of the owner or the symbolism associated with each style.

A stroll along Summit Street is, therefore, an opportunity to experience a microcosm of American Victorian architecture, an example of the romantic ideal of residential life, and one of the city's most appealing streets.

Richard Bartholomew, FAIA, FAAR, is a retired architect and city planner whose career focused on urban design. On Saturday, Sept. 10, Bartholomew will lead a tour of Summit Street, part of the Chestnut Hill Historical Society’s “Discovering Chestnut Hill” walking tour series. To make reservations, go to www.chhist.org/walking-tours or call 215-247-9329, X 202 (it may sell out in advance). This program is generously sponsored by Halstead Roofing and Valley Green Bank.