John Story Jenks by Andrea Neipold Who was John Story Jenks? And why was a Philadelphia public school in Chestnut Hill named for him? Students, alums, parents or teachers associated with Jenks … 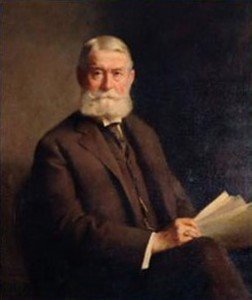 Who was John Story Jenks? And why was a Philadelphia public school in Chestnut Hill named for him? Students, alums, parents or teachers associated with Jenks Academy of Arts & Sciences may know the answers. To most Chestnut Hill residents, J. S. Jenks is only a name, but in reality he was an individual who made significant contributions to the cultural and educational life of the city.

John Story Jenks was born on Oct. 29, 1839, near Ellicott City, Md., the son of William Pearson Jenks and Elizabeth Story Jenks. When his father formed the firm of Randolph & Jenks, Cotton Merchants, in 1847, the family moved to Philadelphia. John Story entered his father’s firm after graduating from Central High School in 1856, and he quickly became a partner.

At 25, Jenks married Sidney Howell Brown. The socially-prominent couple moved themselves and their three daughters to “Inglewood” at 154 Bethlehem Pike. This structure, originally designed by Thomas Ustick Walter but remodeled for Jenks by Cope & Stewardson, and ‘Inglewood Cottage’ at 150 Bethlehem Pike, became a family home where Sidney and John lived until their respective deaths.

As Philadelphia grew to be a thriving commercial and industrial center in the late 19th century, John S. Jenks became a prosperous, civic-minded businessman who served on the boards of several banks and insurance companies and of the Pennsylvania Hospital.

He was a member of the Union League, the Historical Society of Pennsylvania and the American Philosophical Society, among others. Jenks was also involved in an organization to celebrate the century of peace (1814-1914) between the United States and England, and succeeded in acquiring, restoring and furnishing Sulgrave Manor, the ancestral home of George Washington in Northamptonshire, England.

As one can see, the broad outlines of Jenks’s life are very similar to those of many of his Chestnut Hill contemporaries. His interest in the education of young people, expressed through his philanthropy, is most likely why the school was named in his honor. He served for many years on the Philadelphia Board of Education as a supporter of the reforming superintendent, Martin Brumbaugh (later, governor of Pennsylvania). An avid collector and numismatist (a collector of coins and currency), he was involved with the Pennsylvania Museum and School of Industrial Art (later known as the Philadelphia Museum School of Art) for nearly 20 years. A publication produced by Jenks in 1906 also lends evidence to his naming, where he recommended coin collecting as “instructive to any young girl or boy” as a means of learning geography, history and languages. On top of all this activity, Jenks was also involved in the Society for Organizing Charity, as well as the Society for Employment and Instruction of the Poor.

John Story Jenks died on April 7, 1923, a year before construction of the school had finished completion. A memorial notice in the Bulletin of the Pennsylvania Museum concluded with the following encomium: “And above all there was in him a kindness of word and deed that won the everlasting regard of those whose privilege it was to work with him and the respect of all who knew him.”

Philadelphia public schools are typically named for well-known figures in the history of the United States or for particularly notable Philadelphians, and although John Story Jenks may only be memorialized in our zip code, he most certainly can be held to the same esteem.

To search for more information on John Story Jenks or The Jenks School, make an appointment to visit the Archives at the Chestnut Hill Historical Society by calling 215-247-0417, or view the photographic collection online at CHHist.org