DRC hears proposals to save one historic building, demolish another

Three zoning issues were presented. These were all initial presentations for DRC guidance, and no decisions were made.

DRC hears proposals to save one historic building, demolish another 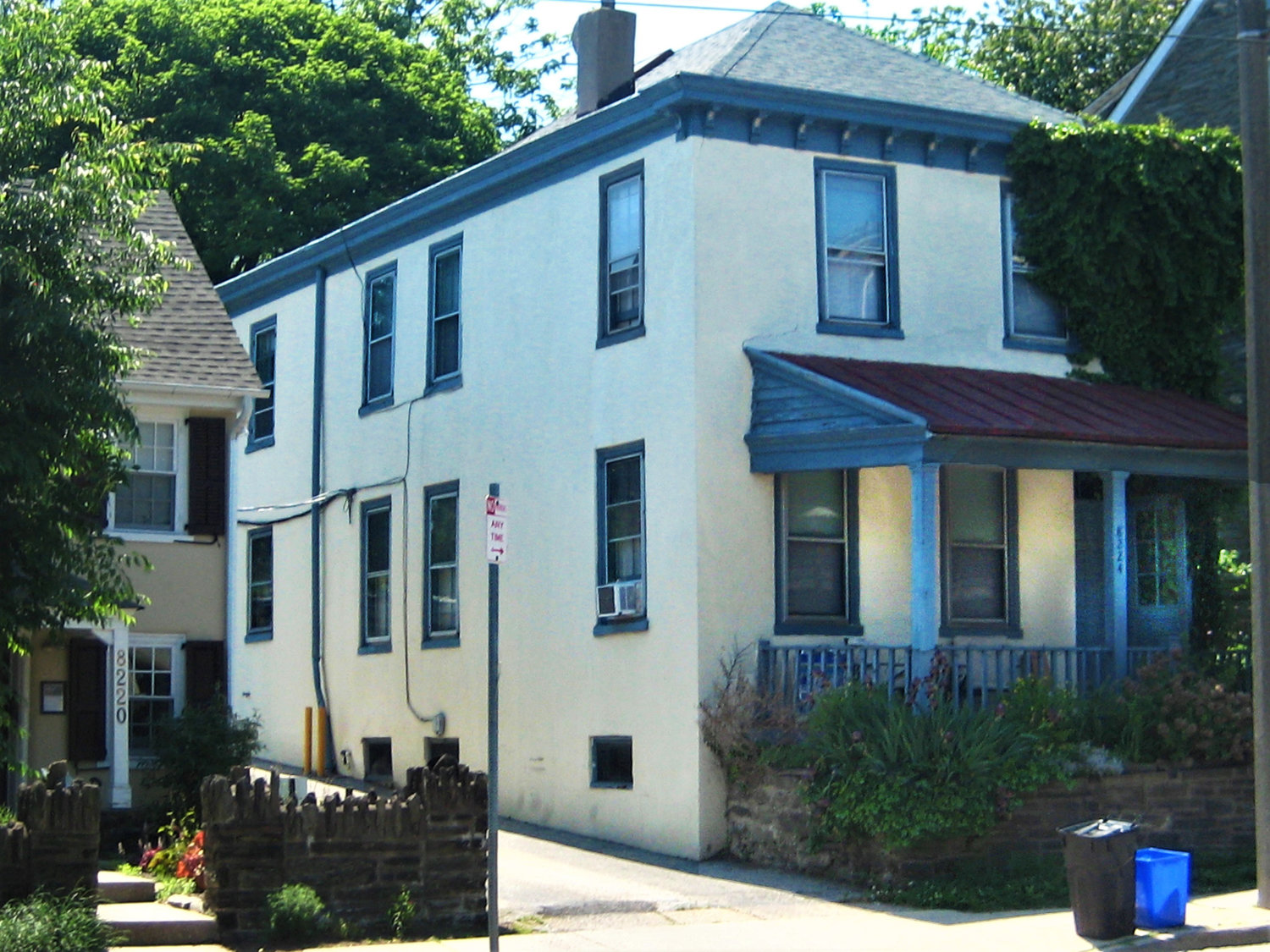 The DRC heard a preliminary proposal to demolish the two-story building at 8224 Germantown Avenue and replace it with a three-story home with an apartment in the basement. The property was built between 1855 and 1889 by Harriet Detwiler and Caroline C. Hammond. The building next door (left) at 8220, now the Cat Clinic, was built in 1744 as the Detwiler farmhouse and is considered the oldest building in Chestnut Hill.
Posted Wednesday, May 26, 2021 10:00 am
by Walt Maguire

The May 18 meeting of the Chestnut Hill Community Association Design Review Committee was quieter than most recent ones. Three zoning issues were presented. These were all initial presentations for DRC guidance, and no decisions were made.

One of the three, however, involving the proposed demolition of a historic home, was met with disapproval

The first, a proposal to divide 540 W. Moreland into a front lot and a rear “flag” lot. (“Flag” refers to the shape: A long driveway, representing the flagpole, leading to the large rectangle of house and land.) The historic main house on the rear lot would be restored (work was delayed due to the pandemic) but it was unclear if would remain a single-family dwelling.  At this time the owners have no plans for the front property (i.e., the existing front lawn).

The second item on the agenda was a house at 215 E. Evergreen and a request to use the cottage in the rear as an apartment to let. Graciela Vargas and Richard Corkery, the current owners, presented a supporting letter from their neighbors indicating not only that they had no issue with this, but that previous owners of the property had already been renting out the cottage without zoning approval or any issues. The DRC suggested an agreement by the owners to avoid short-term or Air BnB leasing might resolve the issue, making the minimum on a lease six months or one year.

The third presentation was a proposal to demolish the two-story, two-apartment building at 8224 Germantown Avenue and replace it with a three-story home with an apartment in the basement. The current owner, Stanley Baum, purchased the building in the 1980s. The applicants are his grandson and his wife, Jesse and Emily Carpino.

Baum said the rentals on the two small apartments have generally been 1-2 years. He said he’s been concerned about the building, as it is not up to code, and it would be too small for Jesse and Emily Carpino to live in the first-floor apartment and raise a family. “If they’re going to be living here, they have to have a facility where they can actually raise a family and live. That property is presently not in a state to do that.”

The proposed building would follow the exterior design and footprint of the existing building, with a small parking space and large green yard behind it.  The renderings showed a house with a similar design to the existing house, on a taller scale.

While Carpino was commended for being “wonderfully direct,” there was no support for the plan.

Patricia Cove, of the Chestnut Hill Conservancy’s Historic District Advisory Committee (HDAC), was not in favor of the demolition. “One of the reasons we have the honor of being a national historic district is because of the amount of the historic structures within our inventory,” she said. “This particular house is actually considered significant on our national register, one of the premier listings on our national register.”

The CHC lists the property in its inventory of the Historic District as built “Between 1885 and 1889; Harriet Detwiler and Caroline C. Hammond, owners. A 2 ½ story, 3-rank, stuccoed dwelling with hipped roof, shed ground floor porch, wood cornice and framed openings. Additions and alterations occurred in 1922, 1931, 1932, and 1972.” The building at 8220, now the Cat Clinic, was constructed in 1744 as the Detwiler farmhouse, and is considered the oldest building in Chestnut Hill. The building on the north side, at 8226, was built in 1796. All three were owned by the Detwiler family. The fact that all three exist next to each other adds to the significance.

Another historic significance she cited was the construction materials – stucco, wood, framed openings, all representative of the period.

“It’s these historic buildings like this that give Chestnut Hill the historic character we all love, and why we all decided to live here,” Cove added. “For all of these reasons, the CHC is asking you to reconsider the demolition, and instead consider what could be called a restoration, renovation, rehabilitation, that can conserve the critical historic features.”

“The demolition of this house would be a travesty,” added DRC member Richard Snowden. He referred to the cluster of buildings on that block as “Ground zero for the Conservancy.”

Carpino seemed unaware of the full historic value of the property. Even some members of the DRC had been unaware.

Following Cove’s remarks, CHC members offered an alternative, suggesting the façade of the building could be maintained and a new addition could be added in the rear to accommodate the modernization. Since the building is of historic significance but not historically certified, this is permitted.

Lori Salganicoff, CHC executive director, suggested Carpino had “an opportunity to build behind. I’m hopeful you will take advantage of what we can offer, what others in the community can offer, to talk with some preservation architects.” She pointed out both LUPZ and HDAC will question this. “It really seems like there’s a great opportunity for you to both increase the workability and functionality of your home and not disrupt the streetscape.” There was some speculation that there might not be enough room on the lot to build an addition, but only the rebuilding plan had been presented. “Given that you clearly have an interest in relating to the historic properties here, the best thing you could do is retain that and use that as your starting point.”

“We have to face up to the fact that some buildings on the avenue, and in Chestnut Hill, can’t be re-programmed, even for the best intentions,” said Snowden. “This is a miniature historic building that is eminently saleable in the current real estate market.” He observed there was no viable hardship. “We have to be very careful in allowing those kinds of things, or we won’t have a historic district anymore.”

As this was a preliminary review, no decisions were made.