As a result of the federal infrastructure bill passed last week, the Nicetown Community Development Corporation will receive $1 million to develop a sports court beneath the elevated Roosevelt Boulevard. 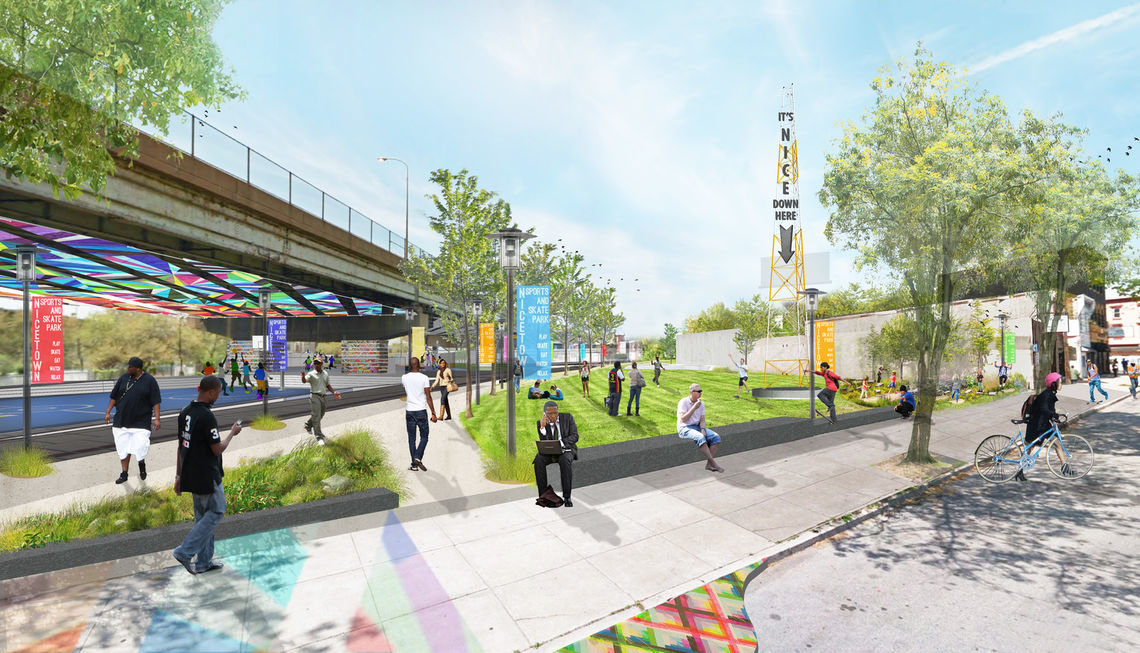 As a result of the federal infrastructure bill passed last week, the Nicetown Community Development Corporation will receive $1 million to develop a sports court beneath the elevated Roosevelt Boulevard. The development will include basketball courts, rain gardens, a skate park, a small amphitheater and a plaza for vendors.

“In Philadelphia and across the nation, we have seen what happens when pavement comes before people, when cars come before communities,” said Evans. He pointed to the Vine Street Expressway cutting through Chinatown, and the way I-95 interrupts pedestrian traffic to Penn’s Landing. Referring to the way the elevated section of the Roosevelt Expressway cuts across Nicetown, “This is an example of what you call mobility injustice - meaning that it divides the community.”

It also provides for stormwater mitigation. When it rains in Nicetown, stormwater falls down from the elevated highway to the non-absorbent asphalt below, where it pools. A new combination of rain gardens and sewers will redirect and absorb the runoff, with better connection to the sewer system.

Nicetown was divided in 1961, when homes and businesses were torn down to make way for the Northwest Extension of the Roosevelt Boulevard over Germantown Avenue. More than 40 row houses were knocked down, opening up a gap in the middle of the community where the business district had been. Majeedah Rashid, chief operating officer of Nicetown CDC, said “Part of what the Nicetown CDC has been doing for years is to bring connectivity to the Germantown Avenue commercial corridor - where people were displaced and businesses were displaced.”

The initiative’s funding is just the beginning. Rashid said that this new funding, along with matching grants from other sources - including the Tony Hawk Foundation and the Philadelphia 76ers - means they’ve raised roughly half of the $9 million total needed to complete the project.

“Ryan Boyer [business manager of the Laborers' District Council of Metropolitan Philadelphia & Vicinity and president of the Philadelphia Building and Construction Trades Council – AFL-CIO] was there with a lot of his labor union people talking about all the jobs that would come from the infrastructure bill,” Rashid said. She felt their presence, with the backdrop of the highway overpass, was a symbol of both the reuniting of the community and the jobs that will be created as the work progresses.

Rashid said the sports center project has been in planning since 2015, and is ready for funding. “All that funding that we were selected for, you have to be shovel ready,” he said.

Evans voted for the bipartisan bill to provide $550 billion in new federal funding for infrastructure, estimated to add millions of jobs over the next 10 years. The House vote on Friday, Nov. 5, sends the infrastructure bill to the desk of President Joe Biden, who was expected to sign it Monday, Nov.15.

“I’m happy to vote for this massive new investment in job-creating repairs and upgrades to our transit, roads, bridges, water, sewer and other systems,” Evans said at a news conference last Tuesday.

On Friday night, Evans also voted for a House rule to clear the way to pass the Build Back Better Act in the near future, providing another $4 billion for similar programs to help those neighborhoods.

“I also look forward to passage of the Build Back Better Act, which would be a historic investment in making child care, housing and prescription drugs more affordable,” Evans said. “It would also be a historic investment in fighting climate change and would continue the Biden expansion of the Child Tax Credit that I voted for, which is on track to cut child poverty in half.”

“It’s this next batch of money that everybody's fighting over,” said Rashid. “So we will be on pins and needles.”