(Ed. Note: Neil Nolen is a Mt. Airy native who now lives in Odessa, Ukraine. He wrote this about 80-year-old acclaimed artist and poet Carol Seitchik, who is also from Mt. Airy — Bryan Street … 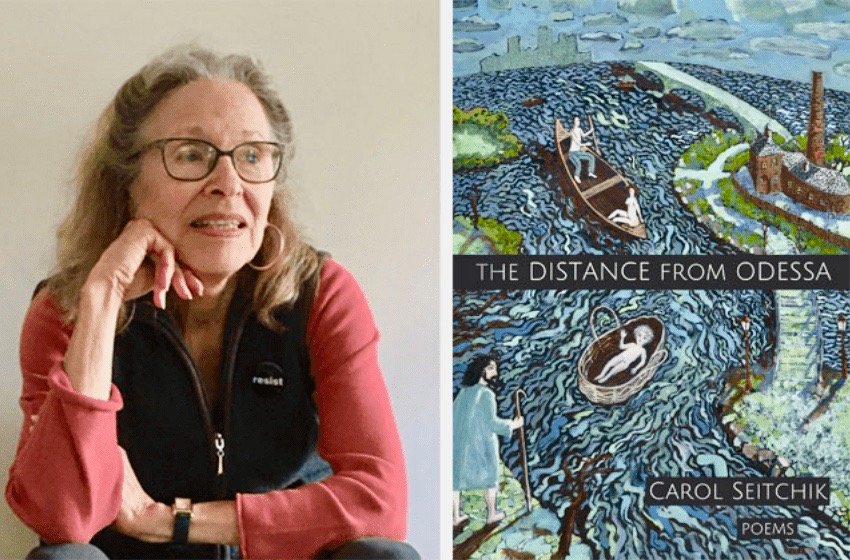 Carol Seitchik, 80, after a lifetime as a visual artist has published her first book of poetry, “The Distance to Odessa,” about the immigration experience. The image on the book cover is a painting by Boston artist Alex Gerasev titled "Arrival."
Posted Friday, March 26, 2021 10:00 am
by Neil Nolen

(Ed. Note: Neil Nolen is a Mt. Airy native who now lives in Odessa, Ukraine. He wrote this about 80-year-old acclaimed artist and poet Carol Seitchik, who is also from Mt. Airy — Bryan Street and then Devon Street — but is now living in Massachusetts. Seitchik still has several relatives living in Northwest Philly, such as her niece, Chestnut Hill resident Paula Seitchik, who recently brought Carol's poetry to Nolen's attention.)

It is said that moving to a different country is the emotional equivalent of the death of a loved one. Coping with bereavement and the profound longing for the familiar become daily struggles. An immigrant is torn between her memories (and sense of belonging) on one extreme and the uncertain prospect of surviving in an alien world on the other. What is the psychic toll for such a transition? And what if, rather than a linear process of healing and assimilation, the pain of separation is circular, and loss is revisited over generations within one family?

These questions of estrangement, survival and continuity are explored profoundly by the former Mt. Airy artist Carol Seitchik in her first book of poems, “The Distance from Odessa” (Atmosphere Press, 2021). Drawing from her own recollections and her relatives’ impressions formed over three centuries, Seitchik, 80, animates the heroic journey of her family from Odessa to the ”New World” and then finally to The Holy Land. The odyssey is fraught with doubts and rebirths, triumphs and isolation. Of her own relationship with her grandmother, Seitchik wrote, “I kept asking her, year after year, how did you leave Russia? She would always say, 'I left in a hurry.'”

The fact is that 116 years ago, 16-year old Rebecca Futernick, Carol's grandmother, struck out by sea, stowed away alone on a perilous journey to America. Her hasty departure played out in a context of chaos and suffering which compelled her to flee Odessa and her middle-class Jewish family.

The year 1905 not only witnessed the dramatic mutiny of sailors against the Cossacks. The slaughter of innocents that year extended far beyond the 192 steps immortalized in Eisenstein’s iconic 1925 film, “The Battleship Potemkin.” The uprising’s viscous backlash occurred against feverish anti-Semitism, as Jews were routinely scapegoated for espousing anti-Tsarist revolution.

The truth is, the sailors’ revolt was used as just the latest excuse to brutalize  Jews. 1905 was distinguishable from the pogroms of 1871, 1881 and 1900 only in terms of its bloody excess. So what Rebecca shared of her homeland with her granddaughter, born 35 years later in Philadelphia, was fragmented and perhaps intended to spare her pain that she herself had suffered. Back in Odessa, she said, it always felt like war.

Carol shared the poems from her book, “Distance From Odessa,” online during the Odessa Literary Festival on March 19-21. The festival was sponsored by The United Nations Educational, Scientific and Cultural Organization (UNESCO). Here is part of her interview with the Odessa Journal:

So just how DID you come to the topic of “immigration?”


“I had written the title poem, 'The Distance from Odessa,' a few years ago when I was talking to my aunt Jessie, currently age 98, about her parents (my grandparents). I was interested in the impact of one generation on the other. I knew so little about my grandparents, their immigration stories and the impact on their lives and future generations. Now I have a daughter who has made her life in another country (Israel). Through my writing, I lived (and am living still) the immigration story with her and the ongoing ways it affects future generations.”

Why now? After all, this IS your first book!
“Yes. 'The Distance from Odessa' is my first book at age 80. Why now? I started out in life as a visual artist and had a long career, exhibiting work, etc. I gravitated to sculpture and used for many years a material that eventually made me sick to the point that I could no longer work in my studio. That was 20 years ago when I started writing, found a mentor, took summer workshops at the Fine Arts Work Center in Provincetown, and my writing took off! I have had poems in anthologies and other journals.”

Did your becoming a grandmother consciously or sub-consciously compel you to re-connect to your own grandmother through poetry?
“Grandmotherhood! It was my husband who wanted me to leave a legacy of my poems for our daughter and grandchildren, that they would know me through my writing. And as I thought about it, I wanted to find out as much as I could about my grandparents. And with my daughter emigrating to Israel (13 years now), I wanted to connect across the generations, past and present.”

Is poetry a form of catharsis?
“For me it would be a discovery as to what language can do and reveal. I still do drawings, often even more of a catharsis. Both poems and drawings let me know when I arrive at that place of surprise where I learn something new.”

A longer version of this article first appeared in the Odessa Journal.