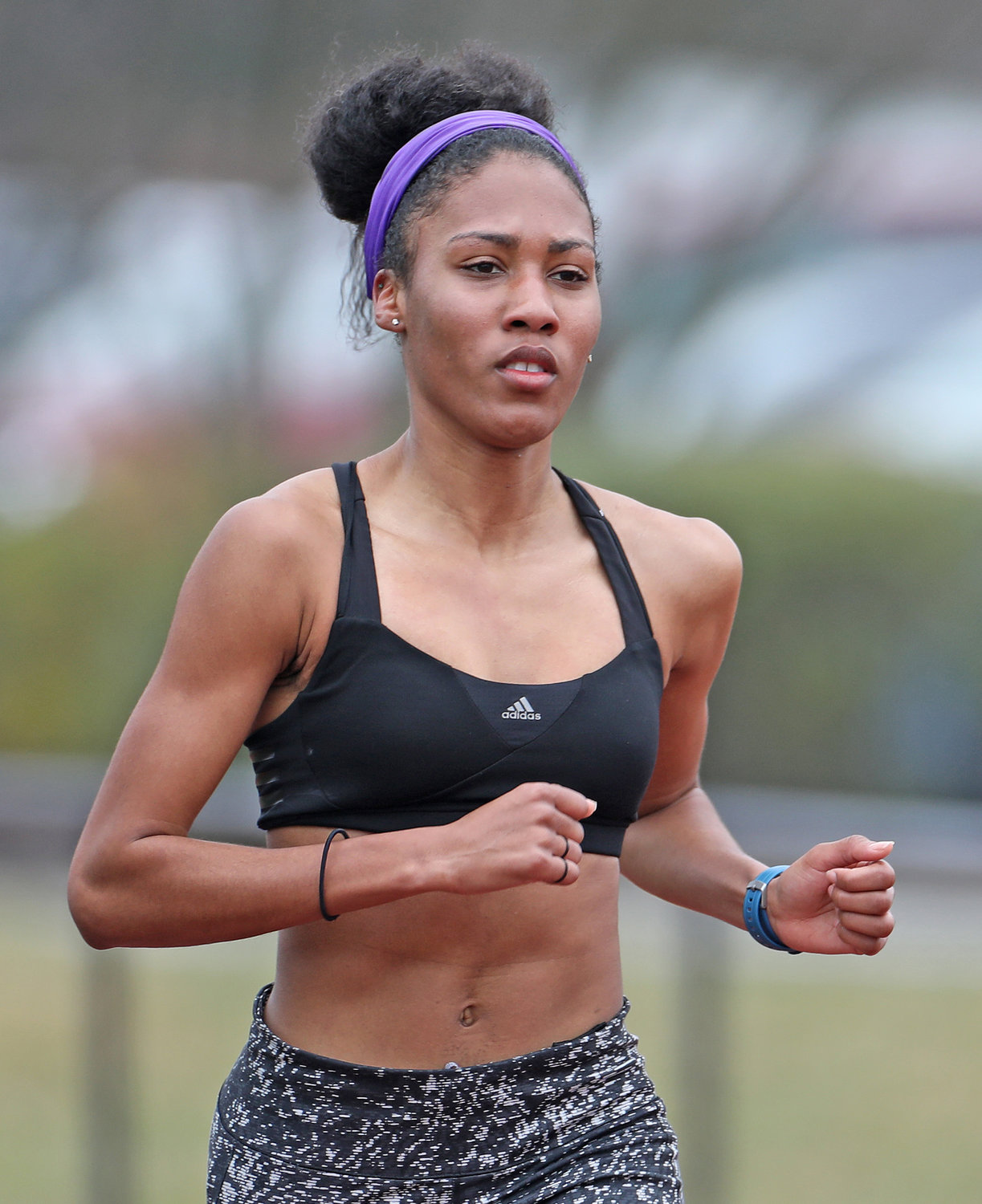 2021 Olympian Ajeé Wilson, who holds the U.S. record in the 800 meters, is seen working out on the track at Springside Chestnut Hill Academy. (Photo by Tom Utescher)
Posted Wednesday, June 30, 2021 10:00 am
by Tom Utescher

At the 2016 Olympic Games in Rio de Janeiro, the competition featured no fewer than six athletes with ties to this area. Now, with an extra year added to the normal interval due to the COVID-19 pandemic, that number has diminished to one for the 2021 Tokyo Games, with the other five declining to participate this time around.

Late Sunday night at the U.S. track and field trials in Eugene, Ore., middle-distance star Ajeé Wilson earned a return trip to the Summer Games. The top three finishers in the 800-meter finals made the 2021 team, and a third-place finish for Wilson secured her spot.

Wilson's home training ground is the track at Springside Chestnut Hill Academy. After graduating from high school in New Jersey in 2012, she soon signed a professional contract with Adidas®. She moved to West Oak Lane in 2013 to train with coach Derek Thompson, who eventually attracted a cadre of elite runners to train in Philadelphia and at SCH.

Wilson, 27, is the current U.S. record holder in the 800, both outdoors and indoors, but this year's pool of talent in that event is very deep. The U.S. Trials final last Sunday was moved back to the evening due to extreme heat that had settled on the Northwest.

A convincing victory was turned in by 19-year-old sensation Athing Mu of Trenton, N.J., who won the NCAA championship in the event with Texas A & M University earlier in June. Last Thursday she announced she would not be returning to college competition and had signed a professional contract with Nike®. Separating from the field over the last 200 meters, she won the trials final in one minute, 56.07 seconds, not far off of Wilson's American record of 1:55.61.

Coming in second was Raevyn Rogers (1:57.66), who had trained with Wilson under Coach Thompson in 2020, then had moved back near to her alma mater, the University of Oregon.

At Rio in 2016, Wilson had missed the finals when she got boxed in by other runners in the slower of the two semifinal races (preventing her from advancing on time, as well as place). She looked to be encountering a similar hazard in last Sunday's trials final.

Wilson was running sixth with just a few hundred meters to go, but a late surge got her across the finish line in third place, with a time of 1:58.39. She was an Olympian once more.

Here's an update on the area's other five 2016 Olympians.

Taylor Ellis-Watson, a 2011 Springside School graduate who ran for NCAA champion University of Arkansas, was part of the U.S. 4 x 400-meter relay that won a gold medal. Now Taylor Washington, she is married and living in Florida. She last competed on the national level in 2017.

Hurdler Nia Ali, who grew up in Germantown, withdrew from the 2021 Olympic selection process; she gave birth to her third child in May. She is still likely to continue her track career, though. After the birth of her first child she won the silver medal in the 100-meter hurdles in Rio, and after her second child was born she came back to win the 2019 world championships in the same event.

Mount St. Joseph Academy's Reinprecht sisters, Katie ('08) and Julia ('09) played on the U.S. Olympic Field Hockey Team in London in 2012 and in Rio in 2016. In between, they won an NCAA national championship playing for Princeton University. They officially retired from the U.S. program in January of 2017.

Another Mount St. Joseph grad, Chierika Ukogu, rowed at the Mount ('10) and at Stanford University. Attending Olympic trials in Africa in early 2016, she went on to race in single sculls in Rio de Janeiro. She represented Nigeria, where both of her parents were born. She is now a resident in orthopedic medicine at Harvard.