For all those fans of McNally’s Tavern, this is a very happy food column I’m writing this week. 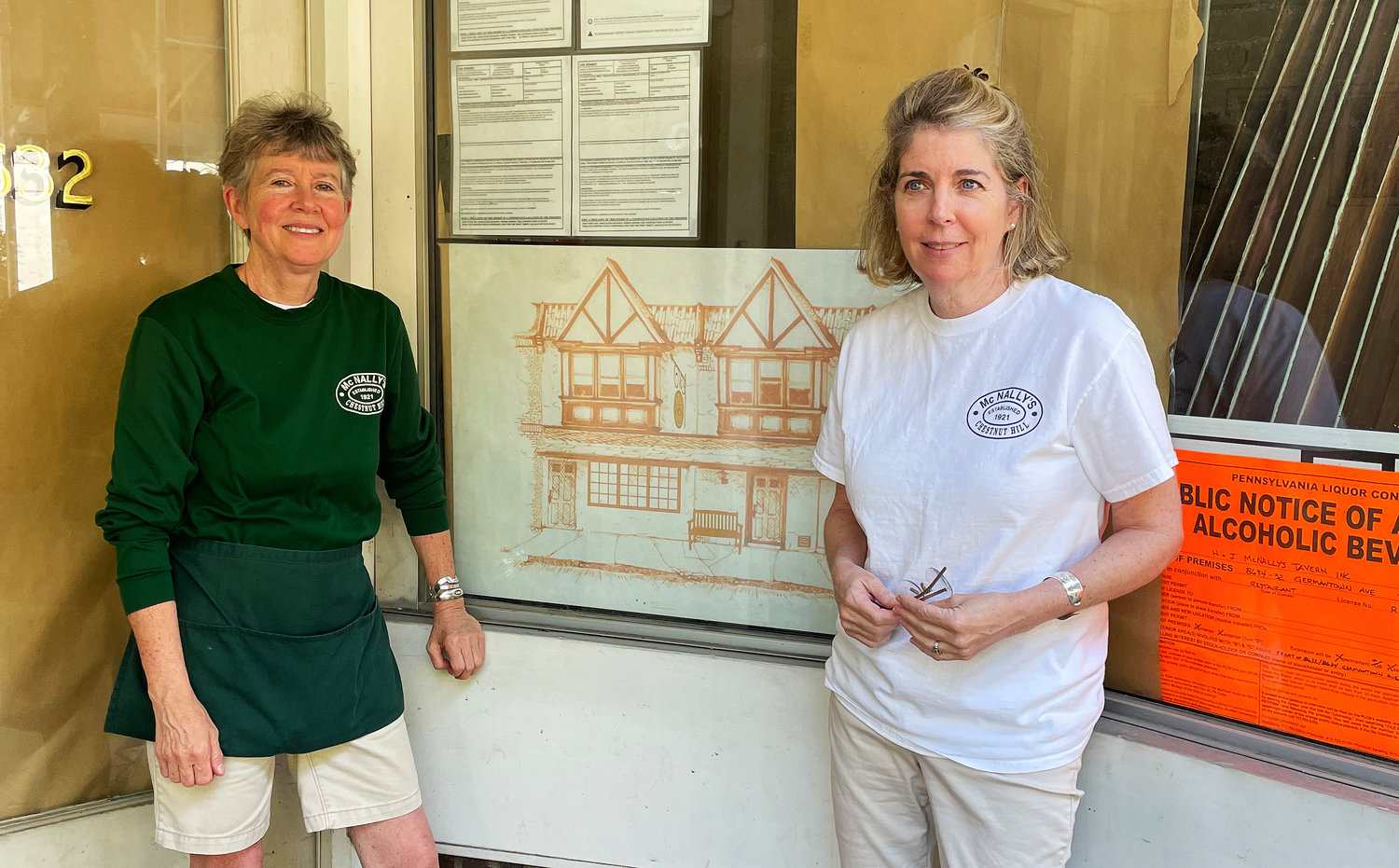 Meg McNally (left) bought the building next door to the tavern back in 2004 and subsequently took up residence upstairs. “We’ve been dreaming of doing this ever since,” her sister Anne said. 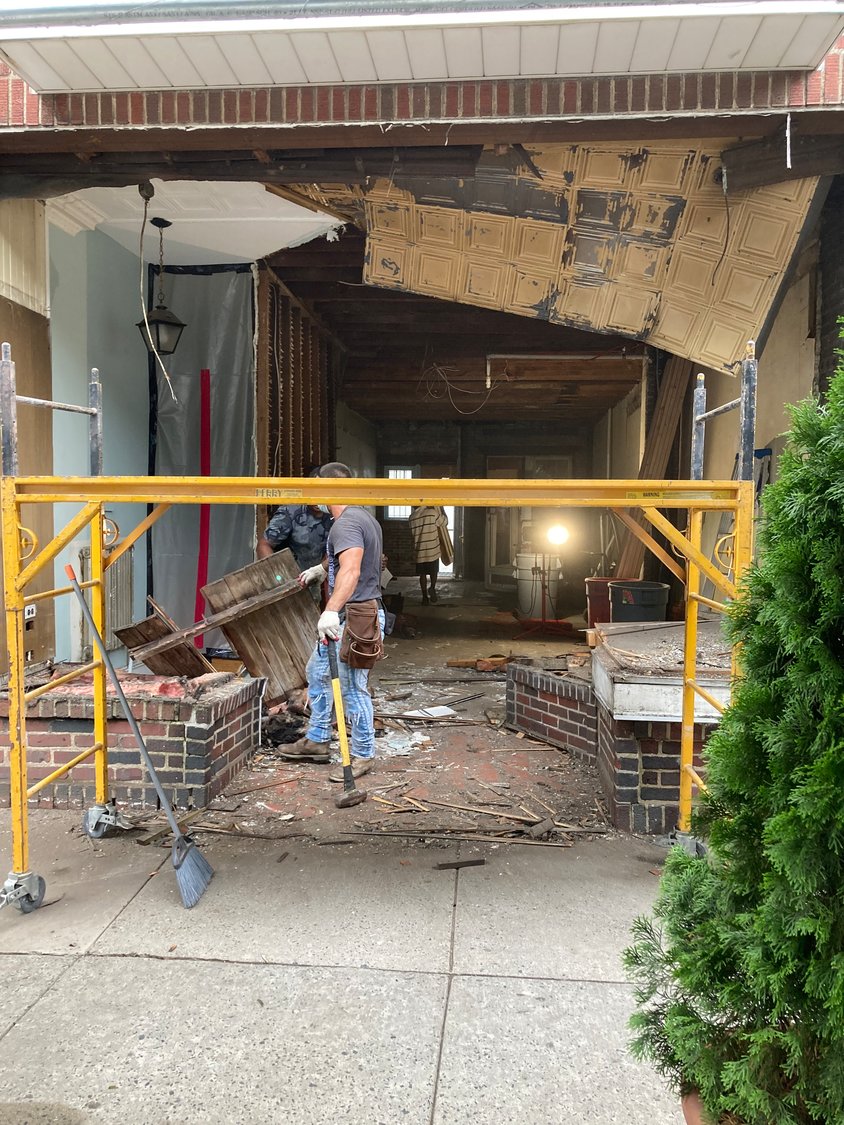 The interior restaurant only seats about 40 to 45. The new space will not have an additional bar, just additional tables and a large wheelchair-accessible bathroom. It will match the original décor to a tee, including the walls and doors of the original beloved place. 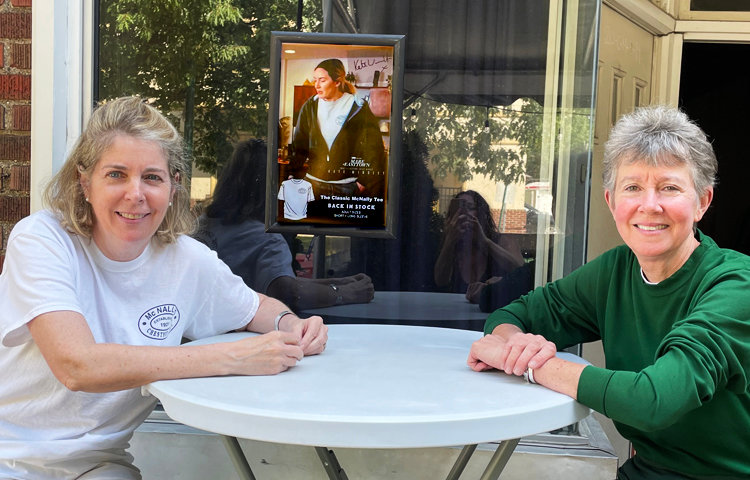 The sisters are planning to have the whole addition built and ready to roll by October, when they celebrate the 100th anniversary of the establishment their great grandmother Rose O’Brien started in 1921.
Previous Next
Posted Thursday, July 15, 2021 10:00 am
by April Lisante

For all those fans of McNally’s Tavern, this is a very happy food column I’m writing this week.

On a recent Wednesday, Anne and Meg McNally ushered me into a dark, empty spot next door to their namesake restaurant at 8634 Germantown Ave. I had no idea where we were going, only that they “wanted to show me something.”

Anne was like a kid on Christmas morning. She flipped on the lights. This adjacent spot at 8632 had been the home of Murray Opticians for more than 50 years, until the place closed in 2017. It is currently a shell of exposed brick and wires, its floor unfinished.

What were we doing here, I wondered?

“This is it, our dream,” Anne said. Then, it dawned on me. More McNally’s!

Apparently, since she bought the building back in 2004 and subsequently took up residence upstairs, Meg McNally had an idea, a dream of sorts. Anne was on board. Maybe one day, they could expand McNally’s into the lower-level space, adding square footage to the original cozy bar and restaurant.

“We’ve been dreaming of doing this ever since,” Anne added.

This week, the dream took shape. This past Friday, two days after my visit, the sisters broke ground on the new expansion, widening the entrance of 8632 and beginning to redesign the 700-square-foot space to look, well, just like the McNally’s next door. It took some time to get city approval, but they are finally ready to make it happen, Anne said.

“The design, even the walls are going to look the same,” Anne McNally said. “We’ve been waiting a long time to do this, and now it’s actually happening.”

The expansion will include a pass-through door that will connect the new space to McNally’s from inside the restaurant near the front left of the bar space. The new space will not have an additional bar, just additional tables and a large wheelchair-accessible bathroom. It will match the original décor to a tee, including the walls and doors of the original beloved place.

“Customers are going to come in and not see a difference [between the two spaces],” Anne said.

Aside from décor, it is the additional seating that will be the most key, the sisters said.

Part of what helped the business through the pandemic, aside from loyal customers, was the tenting Anne and Meg set up outside the front of the building. The interior restaurant only seats about 40 to 45, and in all the years they’ve run the place – Anne since graduating high school at age 17 – they’ve made efficient use of every square foot, from the bar area to the grills set up beside the bar to the cozily packed-in four-top tables that run front to back in the railroad design building.

They aren’t sure when all is said and done with the expansion exactly how many new seats there will be inside the new area, but they are hoping it is enough for larger groups.

“One of the problems we always had was seating large groups,” Anne Said. “We just had a call for a lunch for 15 people. Our tables are so little next door.”

If all goes according to schedule, patrons may be able to have showers, parties and even holiday parties in the new space sometime this fall.

The sisters are planning to have the whole addition built and ready to roll by October, when they celebrate the 100th anniversary of the establishment their great grandmother Rose O’Brien started in 1921. O’Brien opened McNally’s Quick Lunch in a spot across the street from the current location, but moved to 8634 Germantown Ave. in 1927 and never left. It is now run by a fifth generation of family, having remained in the family for a century. It passed from Meg and Anne’s father Hugh McNally to them in the 1990s when he retired.

“A lot of family businesses can be so difficult, especially generation to generation,” Anne said. “But our dad has such faith in us.”